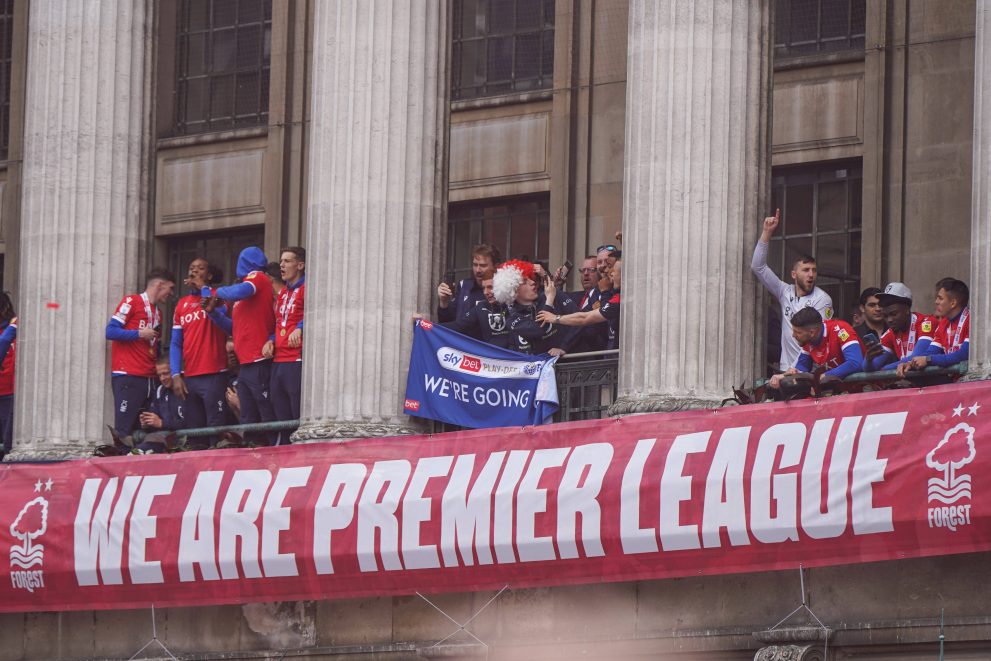 For a certain generation of football fans, Nottingham Forest’s return to the Premier League is a correction in the universe; one of the English game’s elite back in their rightful place.

It has been 23 years in the lower league wilderness for this once great institution. But after beating Huddersfield Town in the Championship playoff final last Sunday, the Reds are looking to write another chapter at the top level.

As a result of this achievement, there is a sense of relief and euphoria sweeping the club and city right now.

“I’m still quite numb and in a daze,” Ryan Freebury of the Forever Forest Podcast tells Compare.Bet. “I’ve supported Forest since about 1990 and the early years were in the top flight, with cup finals, a few yo-yo relegations and promotion seasons. But it’s a stark contrast to the last 23 years which have been all Championship, apart from three horrific seasons in League One.

“So, in a weird way, I feel like the Championship is our home. The Premier League has been this mystical island, always out of reach with players we never have, money we can’t imagine, TV coverage and rules [like VAR] we don’t see. Of course, I have thought about us being back many times during the past 23 years. Now it’s confirmed, it still feels a bit like we have won the lottery or been selected to go to the moon… a totally out of body and surreal feeling.”

For Freebury’s era of supporters and those who have followed, Forest’s exile from the Premier League and the inability to build on past glories was chastening. Now there is a sense that the shackles are off and they can dream once again.

“The first few years of this barren spell were hard. I think it got easier when I accepted we weren’t the big club I’d been used to, and when I dropped a certain amount of arrogance about what teams ‘deserve’ to be in the top league.

“Of course, as a product and a saleable commodity, the Premier League is, to many, way more attractive, with the biggest stadiums  and clubs with the most successful histories. But that’s not how football works, so I’m fine with that. The hardest bit is the ceiling it puts on your accomplishments. You can’t go for European competitions or be named Champions of England when you’re in the second best league in the land. Hopefully we can now start making plans to rebuild towards those goals.

“For fans under 30, [playing in the Premier League again] will be dreamland. The generations who have always had social media in their lives and seen the Premier League as the behemoth it is… it will be like winning the Golden Ticket to finally see inside Wonka’s Factory.

“For those of my generation [Freebury is 41] it’s a mixture of nostalgia and the unknown of how we will do against the top four, six, eight or whatever number they are now on.

“For those who remember the European Cup wins, well they’ve seen it all, so are probably enjoying the ride wherever it leads. It will mean so many different things to each person, be that finally having the City Ground rendered on FIFA to now really struggling to get a ticket.”

Steve Cooper may not be Brian Clough, the legendary former manager who led Forest to successive European Cups in 1979 and 1980. However, the current boss has achieved the sort of status arguably never attained by another since Clough retired in 1993. Many have tried and failed to regain Forest’s position at the very top of the table, but the manner in which Cooper landed promotion makes it all the more impressive. He only arrived in September, with the club winless after eight games and floundering. Chris Hughton was in charge and relegation felt like a genuine possibility.

Over the next 38 matches, nobody performed better. Not even the runaway winners, Fulham. It was an impressive turnaround and something rarely seen before, all culminating in a day at Wembley that no fan is ever likely to forget. But at the same time, it is hard to believe that many were expecting this.

“The club under Hughton were grey, rudderless, uncomfortable, disjointed and looked every inch relegation fodder,” Freebury continues. “I’ve seen four relegations in my time as a Red and, with each of them, the squad has had the same scent of death about it quite early on.

STILL HASN’T SUNK IN 🏆 23 YEARS LONG WAIT TO BE BACK IN THE PREMIER LEAGUE WHERE THIS CLUB BELONGS 📈 IM JUST SO GLAD & HONOURED TO BE APART OF IT ♥️! YOUUUUU REDDDSSSSS♥️🤍♥️ pic.twitter.com/dieIW0933N

“Cooper was walking into a club in a mess. That said, 25,000 turned out for his first home match. He said all the right things in interviews, and results more or less instantly flipped. We began to pull away from the mire. We had heard many a manager say the right thing, but Cooper was backing it up. He spoke of unity, didn’t single out any players or entertain praise being thrown his way…. and the fans saw attacking and exciting football.”

Every year, the topic of conversation is the same for those three clubs who have the Premier League to look forward to as a new challenge. There is always talk of the buzz, the hope, and the expectation of what the new season will bring. For Forest, given where they’ve been, there is an added poignancy.

“I think the main thing we will inject into the Premier League, unlike a lot of other clubs, is that we really appreciate what we’ve missed. We have been trapped on the other side of the fence from the biggest festival you can attend, and we have been screaming and shouting to make the organisers of that festival realise we can make noise, put on a show and be a real asset to the line-up. Now we have to prove it.

“The size of a club is relative in many ways. But you can judge size through the roar of the home crowd, the atmosphere in the stands, the numerous songs they sing, the setting of the ground, the style of play, the ethos and plan for the club’s future, all built on the heritage of being the oldest team out of the 92 professional sides, and double European Cup winners. In that, I do think the Premier League is about to get a huge dose of what a proper club looks and sounds like. I’d love nothing more than the side to be getting results to make those sounds loud, happy and due to success.”