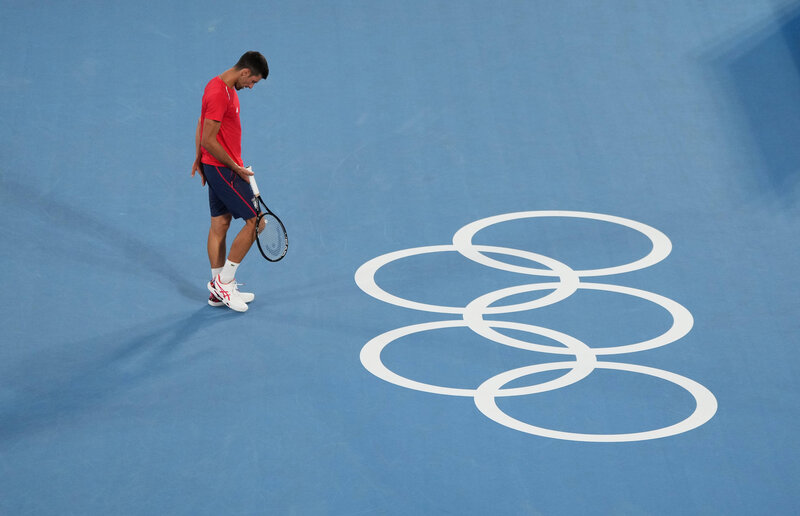 Indeed, the sport wasn’t part of the games until 1984. Olympic tennis has struggled for prestige in the years since, with the awkward scheduling between Wimbledon and the US Open not helping matters. This isn’t to say elite level players aren’t driven by the prospect of a gold medal, though.

Novak Djokovic, for instance, sees victory in the men’s singles in Tokyo as an important part of a potentially historic year. Steffi Graf is still the only men’s or women’s singles player to have completed the fabled ‘Golden Slam’ (all four Grand Slams and Olympic gold won in the same year) and so with the Australian Open, Roland Garros and Wimbledon titles already in-hand, Djokovic has history in his sights.

Novak Djokovic will look to complete the calendar Golden Slam for the first time since Steffi Graf in 1988 🏆🏆🏆🥇🏆 pic.twitter.com/2lrCVWOxXQ

The field, however, will reflect a number of concerns around this year’s Olympic tennis tournament. Rafael Nadal and Roger Federer both withdrew due to injury while Serena Williams hinted at her dissatisfaction at the COVID-19 situation in Japan when confirming her intention to skip the Olympics.

On the men’s side, Daniil Medvedev could be Djokovic’s biggest challenger. The Russian is currently ranked number two in the world despite failing to make much of an impact at Wimbledon and is one of the few players who can stick with Djokovic from the baseline on a hard court. Indeed, Medvedev is very difficult to break down and hit through. Those qualities could serve him well in Tokyo.

Stefanos Tsitsipas is another who will fancy his chances of a good tournament having made his first-ever Grand Slam final at Roland Garros just two months ago. The Greek might not be in the best of form, losing in the quarter-finals of this week’s Hamburg Open, but the number three seed has the weapons to be a threat in Tokyo.

Andy Murray enters the men’s singles as the defending champion having won the gold medal at both the 2012 and 2016 Olympics. The last five years have brought more challenging times for the three-times Grand Slam winner who is now playing with a metal hip, but there’s something about the Olympics that brings the best out of Murray.

The best of three-set format (until the final, which is a best of five-set match) could see Sascha Zverev make a good run. Long-tipped as a future Grand Slam winner, the German has struggled to dismiss opponents in the early rounds of best of five-set tournaments, to the point where Zverev’s tendency to get involved in five-set slogs has become comedic material.

Zverev’s record at Masters 1000 level and at the ATP Tour Finals which he won in 2018, makes for much better reading and so the similar format of the Olympics could suit him, as might the hard courts in Tokyo. Zverev made his one and only Grand Slam final on the hard courts of Flushing Meadows last year.

On the women’s side, Ash Barty enters the singles on the back of her maiden Wimbledon triumph earlier this month. The Australian suffered with injury at Roland Garros but looks to have found top form again and has enjoyed a good period of rest since beating Karolina Pliskova in the Centre Court final two weeks ago.

Pliskova will also be a threat in Tokyo having made a run all the way to the Wimbledon final, but nobody in the women’s singles will have the draw of Naomi Osaka, playing on home soil and for the first time since her withdrawal from Roland Garros. The 23-year-old is a four-time Grand Slam winner and could thrill Japanese fans by adding an Olympic gold medal to her personal honours board.

Iga Swiatek could also be dangerous as the Pole continues her development into a true superstar of the sport. The way Swiatek absorbs power and translates it back into her own groundstrokes makes her a threat in every tournament she plays and it’ll be no different in Tokyo even if the hard court surface in Tokyo might not be to the 20-year-old’s benefit.

"If I could win a medal, it would probably be the highlight of my career.”

🇵🇱 @iga_swiatek, whose father competed in the 1988 Olympics, is thrilled to be representing her country in Tokyo ⬇️

The women’s game has been wildly unpredictable in recent times – see how Barbora Krejcikova and Anastasia Pavlyuchenkova both played their first Grand Slam final against each other at Roland Garros. It’s possible the draw could open up again in Tokyo, although Barty will take some beating as the incumbent world number one.

While it’s true the Olympics doesn’t carry the same importance as prestigious as a Grand Slam in tennis circles, the tournament can provide a springboard for players who have yet to make their majors breakthrough. Murray, for example, used the 2012 Games to prove that he could win a final on Centre Court just weeks after he’d lost the Wimbledon final to the same opponent, Federer.

Someone like Medvedev, Tstisipas or maybe even Zverev could use the 2021 Olympics in a similar way, as could Aryna Sabalenka who is playing with a lot of drive and aggression at the moment. The Olympics might not be the pinnacle of tennis like it is for many other sports, but victory in Tokyo could lead to bigger and better things for whoever stands atop the podium.

Five of the top 10 men, along with four of the top 20 women, will be missing in Tokyo, but there are still engaging storylines no matter which way you look – whether it’s Osaka’s return to the court on home soil or Djokovic’s pursuit of the so-called Golden Slam. There might be no prize money or ranking points on offer, but the Olympics still means a lot to those who are in Tokyo to participate.