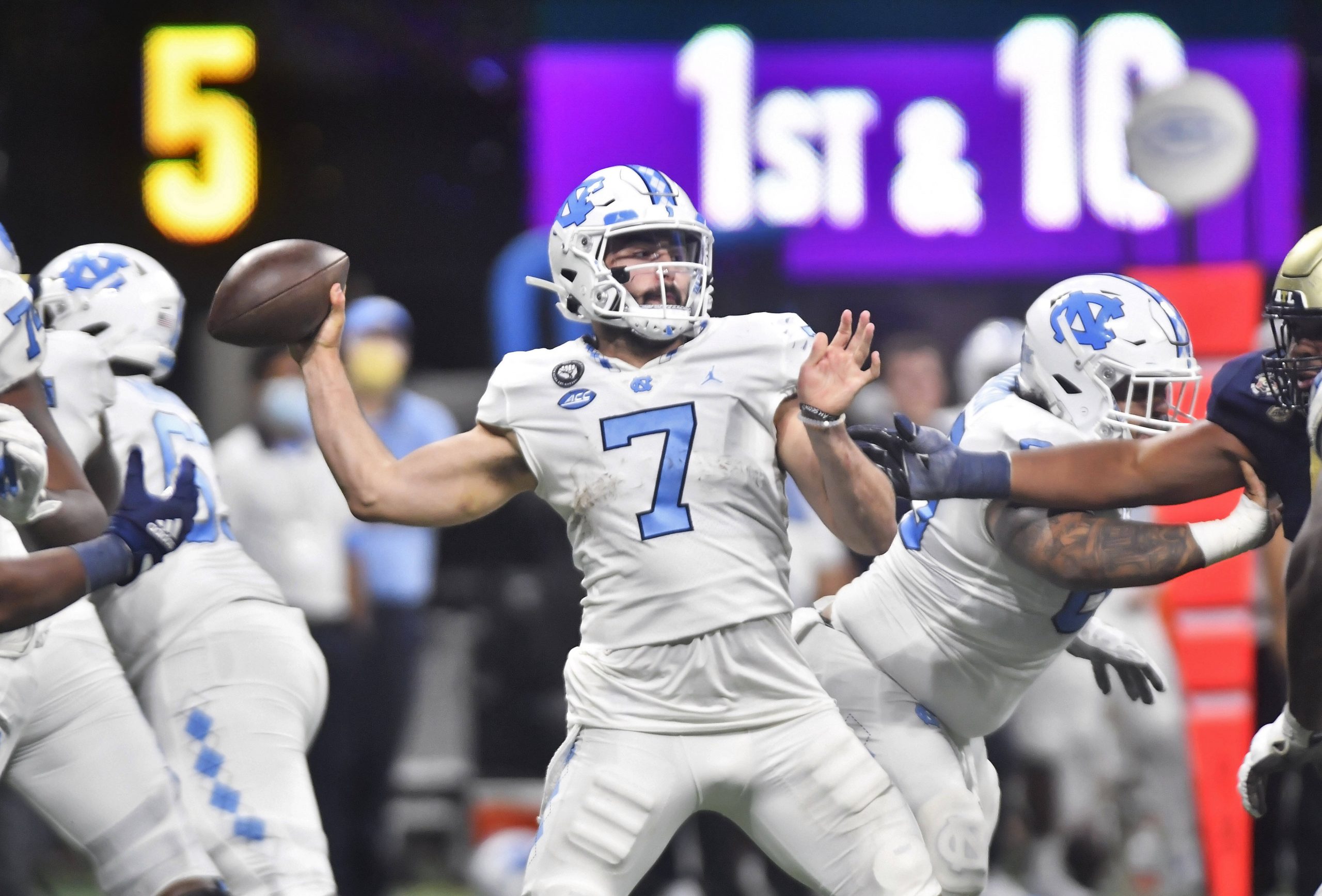 Oregon edge rusher Kayvon Thibodeaux has passed quarterbacks Spencer Rattler and Sam Howell as the top choice to be the No. 1 pick in the NFL draft.

Oklahoma’s Rattler and North Carolina’s Howell were the first and second choices to be the No. 1 pick before the college season began, but as their Heisman chances have dropped, so have their chances to be the first overall pick.

Thibodeaux, a 6-foot-6, 250-pound junior, has played only two games this season because of an ankle injury suffered in the season opener against Fresno State, but his skill-set at a prime position has driven him to the top of the mock draft boards.

Rattler and Howell, meanwhile, have typified the underwhelming showings of the elite quarterbacks in the draft class.

Liberty quarterback Malik Willis, whose skill-set may be the best in the class, has passed both Rattler and Howell in Pro Football Focus’ current mock draft, where Thibodeaux is first. Howell is No. 10. Rattler is No. 12.

While there is plenty of season to be played and time to sway NFL executives, the early performances by Rattler and Howell have shown that projections mean little in the light of present form. Each has been less than overwhelming.

Rattler has been precise with his passes, as his 76.3 completion percentage attests, and he helped Oklahoma (5-0) remain undefeated by completing all six throws on a 14-play 80-yard drive to get up the Sooners’ game-winning field over West Virginia as time expired two weeks ago.

But he has not been the player that Pro Football Focus praised in the preseason, when it wrote that Rattler “has a little bit of Texas Tech Patrick Machines in him, both stylistically and situationally.

“He has an ultra-quick, effortless release to pair with jaw-dropping arm talent and elite playmaking ability outside of structure,” PFF continued in its evaluation.

Rattler’s “outside of structure” grade led FBS passers last season, and it was the best recorded by a Power Five quarterback, breaking the mark set by Joe Burrow in his final season at LSU win 2019.

Rattler, 6-foot-1 and 200 pounds, has not been the dominant presence he was at times as a redshirt freshman in his breakout 2020 season. He has thrown for more than 300 yards only once after four such games last season, and on-notice defenses have been able to keep his scrambling in check.

Half of Rattler’s 10 touchdowns passes came in a 76-0 rout of FCS Western Carolina, and he is averaging fewer than eight yards per attempt against four FBS opponents.

Highest-graded QBs under pressure in Week 5:

Howell, 6-1 and 220 pounds, has not been the same, either. He lost much of his remarkable supporting cast to the 2021 NFL draft, and his overall performance has suffered. The trouble began with an unimpressive season opener on the national ESPN stage in a 17-10 loss at Virginia Tech, the best team the Tar Heels have played so far.

Howell threw three interceptions against the Hokies, and he did not seem to respond well to pressure. His most egregious pick came with 37 seconds remaining to end the final drive, when he made an off-balance throw as he was being tackled. Poor decision-making is not what NFL decision-makers want to see.

Kiper praised Howell in the preseason, saying he is “extremely accurate and can make off-platform throws.” But Kiper also cited the fact that Howell has been sacked more than 70 times in his 2 1/2 seasons as a starter. Virginia Tech sacked him six times.

Howell has made more use of his legs in North Carolina’s RPO offense this season, setting career highs in rushing yards in successive weeks — 104 against Georgia State and 112 against Virginia.

It should be only a mild surprise that Willis, 6-1 and 215 pounds, has become the highest-ranked quarterback in the 2022 draft class at this point.

Willis, who started at Auburn before transferring to Liberty in 2020, has always intrigued NFL scouts because of his athleticism and power arm. Willis passed for 2,250 yards and 20 touchdowns last season and led FBS quarterbacks with 944 yards rushing and 14 touchdowns

He is on a similar pace this season, with 1,105 yards passing and 418 yards rushing. Scouts wanted to see consistency in the passing game, and he has not thrown an interception this season.

“The happy feet and bouts of inaccuracy we saw a year ago have subsided massively while his electric rushing ability and howitzer arm are still very much intact,” Pro Football Focus reports.

Willis will meet No. 17 Ole Miss and Heisman candidate quarterback Matt Corral in a showcase game Nov. 6 in Oxford. Willis was 14-of-19 for 205 yards and three touchdowns in a 24-21 loss two weeks ago to Syracuse, the only Power Five team Liberty has faced this season. He also rushed for 49 yards.