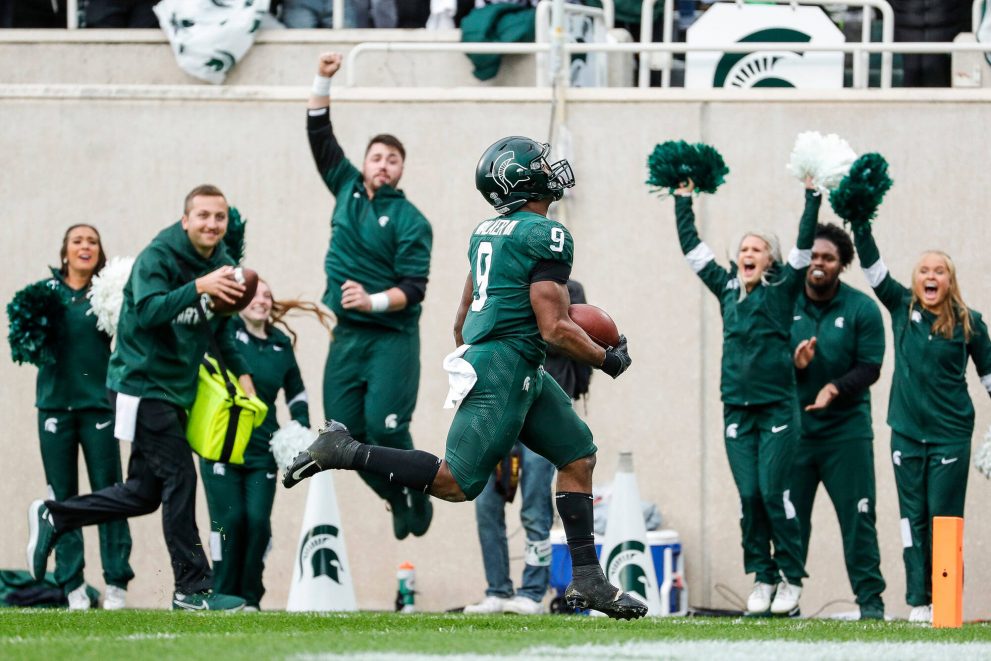 In the biggest of games, Walker III came up Babe-blue, with the kind of statement game that wins trophies and voters.

You know the stats — 23 carries, 195 yards rushing and all five Sparty touchdowns in the comeback from a 16-point deficit for a 37-33 comeback victory over the arch-rival Wolverines.

His numbers are good

His timing was impeccable.

Walker III’s three touchdowns in the final 18-plus minutes capped the largest comeback in series history, on national TV, in a rivalry game that will earn extra credit from voters.

Walker III split the defense on his 65-yard scoring run around the right side that tied the game at 30 with a two-point conversion. His subsequent 23-yard scoring burst with 5:08 left gave the Spartans an edge the defense held.

He had three touchdown on runs of 20 or more yards against a Michigan defense that had given up only one 20-plus-yard touchdown run this season.

Walker III could soon be welcomed to a Heisman fraternity that has skewed quarterback-heavy as the college game has opened up.

Derrick Henry, the last running back to win the Heisman (2015) had 2,219 yards rushing and 28 touchdowns in 15 games that season, averaging 5.6 yards per carry. He had at least one score in every game but topped out at three.

Update: Michigan had allowed 116.6 yards rushing per game before running into Walker III, who leads the FBS with an average of 149.2 yards per game. He is also tied for third with 14 rushing touchdowns.

Status: Walker is the best running back in the nation, although that does not mean quite as much in the wide-open, pass-happy world of college football. Spartan Magic Johnson is all in, tweeting after the Michigan game, “The real Heisman trophy leading candidate stood up today!”

Kenneth Walker III was turning heads in a Heisman-level performance against Michigan.

Last time out: Alabama had a bye

Update: With Walker III, Stroud and Williams having big games on the Crimson Tide’s off day, the race tightened a bit, although Young still guides the most efficient passing offense in college, according to Pro Football Focus. Young’s new-found ability to scramble when the time is right has given him an extra tool to play with down the stretch.

Status: Young remains a 2.5:1 betting favorite over his nearest competitor, and he will have a chance to pad his numbers against slumping LSU and struggling New Mexico State in the next two weeks. New Mexico State has a $1.9 million guarantee for the game in Tuscaloosa. It won’t be enough.

Bryce Young is the most accurate QB in College Football 🚨🐘

Update: Corral is still feeling the effects of the heavy licks he took while carrying the ball 30 times for 195 yards in the Rebels’ 31-26 victory at Tennessee on Oct. 16. After suffering a right ankle injury late in the Tennessee game and playing through it in a victory over LSU, Corral then suffered a left ankle injury when he was hit while attempting to pass late in the first quarter. He missed 12 snaps and returned early in the second quarter but was not the same. He missed three fourth-down passes in the fourth quarter, one of which was in the end zone for his second interception of the season.

Status: A return to full health would be a boost for Corral’s chances if only the weekly grind of the college football season would relent.

Matt Corral is back on the field for @OleMissFB after exiting the game due to an apparent ankle injury. pic.twitter.com/Z6agZeBnEa

Update: Penn State kept Ohio State out of the end zone for 26 minutes before Stroud’s touchdown pass to top receiver Chris Olave late in the first half broke their resistance. The game itself was reminiscent of the Buckeyes’ struggles in their loss to Oregon that in their recent Big Ten blowouts over Rutgers, Maryland and Indiana.

Status: Stroud should remain a top contender until the make-or-break games against Michigan State and Michigan in the final two weeks of the season.

CJ STROUD WITH THE DIME TO OLAVE 😍 pic.twitter.com/3OexKazmYr

Status: Dual-purpose Williams continues to stack career bests since taking over as the Sooners’ starter in the second half of the Texas game. He is since looking more and more like 2019 Heisman winner Kyler Murray every day. Update: The Sooners’ off day comes at a bad time for Williams, who, because of his late start, has a lot of ground to make up and not a lot of time to do it in. He might be the best quarterback in the field, but his resumè is not as deep as his competitors. Walker III’s performance earlier Saturday was as impressive in it its way as Williams’ was, which also does not help.

Update: Pitt had a clear path to the ACC championship game until the loss to Miami when Hurricanes’ quarterback Tyler Van Dyke stole some of Pickett’s thunder with a 426-yard, three-touchdown day. Pickett set a school record with 519 passing yards and broke Dan Marino’s school record for touchdowns responsible for (84) in the process. But his two interceptions — which doubled his season total — hurt, including one that blunted a potential go-ahead drive with four minutes left.

Status: Pickett throws the deep ball as well as anyone. His adjusted passing yards per attempt, which gives extra credit for the length of his passes, is the highest among the Heisman contenders, as calculated by sports-reference.com.

Update: This game was expected to feature a Heisman candidate, just not Hartman. Tar Heel quarterback Sam Howell entered the season with the hype and notoriety. Hartman, meanwhile, has helped Wake Forest into the lead in the ACC Atlantic Division – the best start in school history – as well as a spot in the AP Top 10 for the first time with his command of an up-tempo offense.

Status: Hartman’s scoring has help the  Demon Deacons rank fifth in the FBS, with the team scoring an average of 43.4 points per game. He has slipped under the radar on a school that is not known as a football powerhouse, but he may be changing all that. After North Carolina, Wake plays North Carolina State and Clemson, the teams in the Atlantic hunt.

Sam Hartman turns on the jets to extend the @WakeFB lead! 🎩 pic.twitter.com/aoR1dKPkdj

Update Status: Henderson made up for an early error at the goal line — a false start penalty that forced the Buckeyes to settle for a field goal — with a personal three-play, 71-yard drive for a 27-17 lead over Penn State. Henderson broke a 68-yard run over left guard to set up his 1-yard scoring run two plays later.

Status: Henderson has at least one touchdown in every game this season and remains within striking distance of Maurice Clarett’s freshman rushing records in Columbus, but he still has a lot of work to do to overcome a slow start.