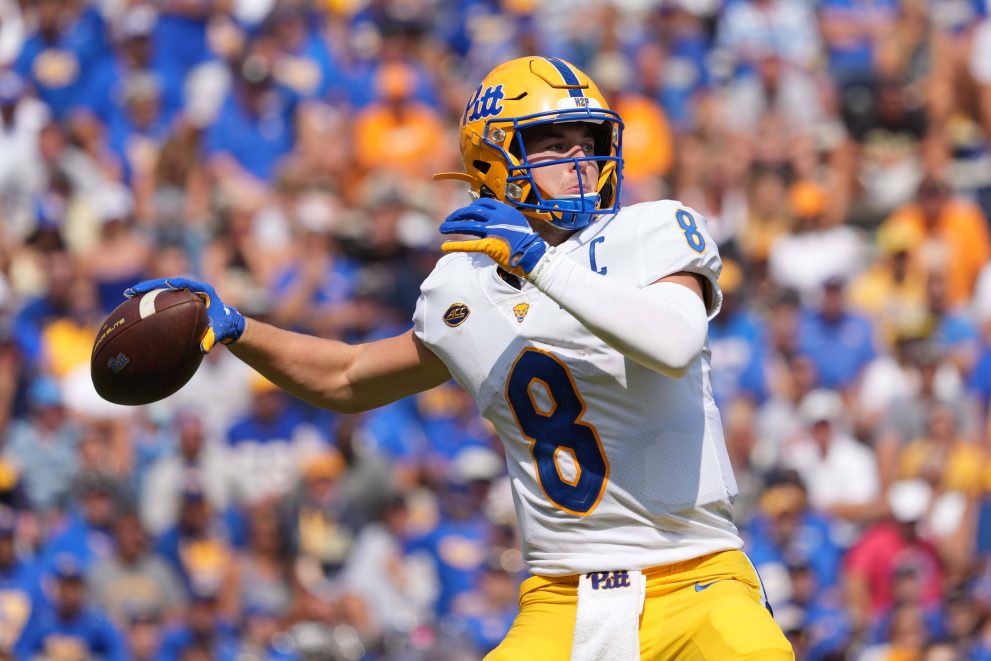 Preconceived notions are a bitch.

Take the top two quarterbacks in the Heisman trophy race.

Player A has 3,171 passing yards, 29 touchdowns, three interceptions and a 68.7 completion percentage. He has 234 yards rushing and four touchdowns.

Player B has 2,755 passing yards, 29 touchdowns, three interceptions and a 69.5 completion rate. He has 18 rushing yards and two touchdowns.

Both play on a team that has one conference loss and leads its division while in line for the league title game, and both teams were ranked in the first CFP poll.

One goes to Alabama.

Kenny Pickett, Player A, has the numerical edge.

Bryce Young, Player B, has the exponentially greater hype.

Pickett has the edge in every measurable, and it is fair to say he has done more with less. As good a recruiter as Pitt coach Pat Narduzzi may be, the Panthers do not lure the five-star recruits the way Alabama does. Nor are they able to mine the transfer portal as successfully.

This week: No. 3 Michigan State (8-1) plays host to Maryland

Update: Walker’s five-touchdown blitz through the Michigan defense two weeks ago was the game of the year for running backs in contention for the Heisman, but he cannot make up for the Spartans’ porous pass defense single-handedly every week. Purdue’s Aidan O’Connell passed for a career-high 536 yards and three touchdowns on 54 attempts last week, a week after Michigan quarterback Cade McNamara set his career with 383 yards passing and two touchdowns on 44 attempts in the Spartans’ 37-33 comeback victory.

Status: Walker is the best running back in the country — he leads the FBS in rushing yards (1,340) and his 6.8-per carry average is second to Baylor’s Abram Smith among backs who have at least 130 attempts. Continued excellence is his key.

This might be a little unfair, but Kenny Pickett needs to throw for 400 yards and at least 3 TD’s tonight or else he will have missed his shot in the national spotlight.

This is the 96th-ranked defense at home. He’s gotta light them up. For both his Heisman & NFL prospects.

Update: Pickett has passed for at least 382 yards in five games this season, and with the 416 against Duke has 935 passing yards in the last two weeks. He recovered from his two-pick game in a loss to Miami with a bounce-back at Duke, when he also ran for 57 yards and a score. Pickett is third in the FBS in total offense at 379.2 yards per game, third in touchdown passes and is fifth in points responsible for (198) and passing yards.

Status: Pitt has its best record through nine games since 2009, and that has everything to do with Pickett and his improved efficiency and field vision this season. The Panthers have scored at least 40 points six times and at least 50 three.

Update: Young had this fourth straight 300-yard game against LSU despite being harassed into four sacks for minus-22 yards rushing and 13 incomplete passes, his highest total since going 28 for 48 in the Tide’s loss to Texas A&M on Oct. 9. Young continues to take advantage of star power at the wide receiver spot. Ohio State transfer Jameson Williams had 10 catches for 160 yards and a touchdown and John Metchie III had nine receptions for 73 yards and a score. Williams leads the SEC in receiving yards and Metchie is fourth in receptions.

Status: With the Crimson Tide’s spot in CFP Final Four hardly a lock Young will have a chance to pad his numbers against New Mexico State, which is giving up 463 yards per game.

Update: Coach Lane Kiffin has smartly pulled in the reins on Corral, who suffered injuries to both ankles the previous two weeks. He took a serious bruising in a 30-carry, 195-yard victory at Tennessee on Oct. 17, suffering a left ankle injury late in the game, and missed a series because of a balky right ankle two weeks ago. Corral had only six carries against Liberty last week, most likely a combination of guarding against further injury and having the game well in hand. Ole Miss led 27-0 at half.

Status: The repeated licks have taken a toll not only on Corral’s body but also on his body of work. He has dropped (dropped?) to No. 8 in the FBS in total offense, behind Kenny Pickett and ahead of C.J. Stroud. Corral has accounted for four touchdowns the last three weeks, two passing, and the lack of volume is hurting.

Update: Stroud had a season-high in completions and tied a season high with attempts at Nebraska, when the Buckeyes could not generate much of a running game (running back TreVeyon Henderson had 92 yards; the Buckeyes because of sacks finished with 90). Stroud had a four-game streak without an interception end with two picks in Lincoln, when he also had his third 400-yard game of the season.

Status: Stroud has fallen behind the top three signal-callers, and a challenging  final three games of the season — Purdue, Michigan State and Michigan — provide ample opportunity to move up.

Last time out: Oklahoma had a bye

Update: Williams turned to the passing game in his third career start, a 52-21 victory over Texas Tech two weeks ago. He threw for a season-high 402 yards and six touchdowns while rushing only six times against the Red Raiders after gaining 224 yards on the ground in his previous three games.

Status: Oklahoma coach Lincoln Riley made exactly the right call in opening the season with Spencer Rattler behind center instead of Williams, considered the top quarterback recruit in the nation a year ago, and Riley made the exact right call in turning to Williams in the second half of the Texas game and beyond. The question remains, is keeping the Sooners undefeated with his run/pass skills enough to overcome his lack of playing time against a star-filled field? It seems like a reach.

This week: North Carolina plays at No. 25 Pitt on Thursday

Update: Howell began to fade from view with nationally televised three-pick loss at Virginia Tech in the season opener, but he has remained a consistent run/pass threat a la Matt Corral. Howell has five 300-yard passing games and five 100-yard rushing games, with three 300/100 games.

Status: Howell set the school record for total offense in the Wake game, finishing with 10,505 career yards. After holding off Wake’s Sam Hartman last week, Howell and the Tar Heels face another statement game at Pitt.

Update: Rogers has found a perfect fit in Mike Leach’s Air Raid offense, where quarterbacks thrive and survive. Rogers has four 300-yard games and has reached 300 in eight of nine games. He is third in the FBS with 3,307 yards.

Status: The Bulldogs’ record works against Rogers, as do his relatively high eight picks. Competition in the QB-rich SEC does not help. This year’s Egg Bowl shapes up as a doozy.