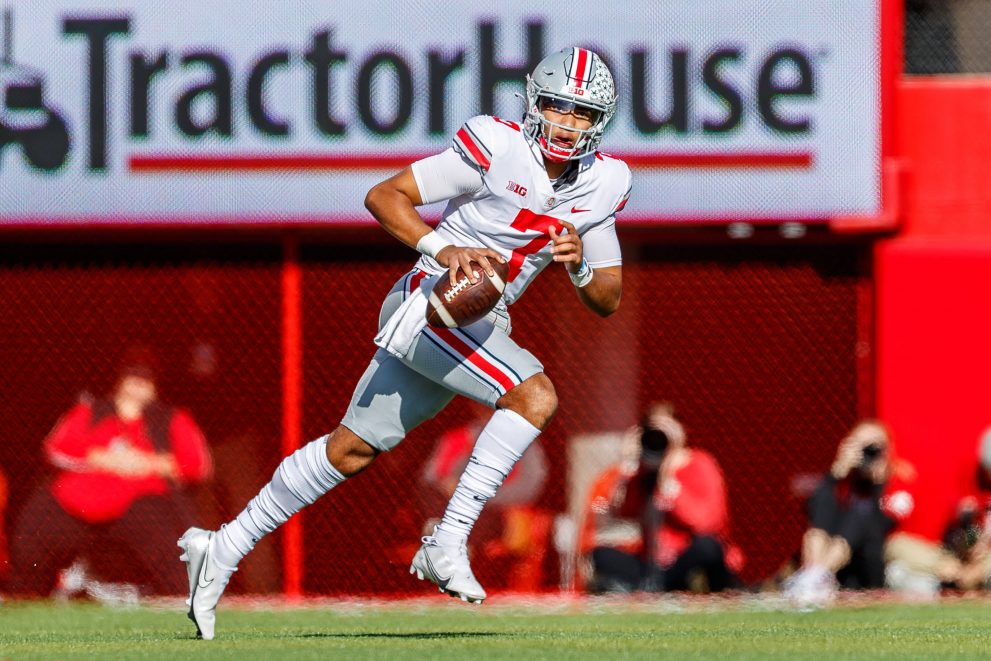 Remember when Ohio State was three yards and a cloud of dust?

The Buckeyes audibled out of that years ago.

Maybe into a Heisman-winning quarterback.

Ohio State redshirt freshman quarterback C.J. Stroud has been firmly in the top tier of Heisman Trophy candidates since the first month of the season, and oddsmakers now see him as a very realistic threat to win it.

Stroud is DraftKings’ second-favorite (+220) to become the first Buckeye quarterback to win it, trailing only season-long front-runner Alabama quarterback Bryce Young (+180). And he has gained more support since the line came out Sunday, where he was listed at +240.

Week 11's Freshman of the Week: C.J. Stroud of @OhioStateFB

You can make his case, especially if voters opt for a quarterback rather than Michigan State’s Kenneth Walker III, the best running back in the nation and the only running back with a shot.

Stroud, Young and Pitt’s Kenny Pickett have very similar numbers this season. All have the benefit of playing on teams likely to make a conference championship game; Stroud and Young are helped by the massive media exposure provided the nation’s elite programs.

Pickett remains the value candidate, although his odds actually rose from +2500 this week despite the fact threw for 346 yards with three touchdowns with an interception in a 30-23 overtime victory over North Carolina last Thursday.

It is time to take a closer look at quick-riser Stroud, who was listed at +900 halfway through the regular season but gradually has closed the gap since.

Stroud has thrown for 1,743 yards and 17 touchdowns with two interceptions in his last five appearances, beginning with a 406-yard, five-touchdown game against Maryland on Oct. 9.

His 405-yard game in a victory over Nebraska two weeks ago was good and bad (two touchdowns and two picks), but he got a big boost by throwing for 361 yards and five touchdowns when the Buckeyes stretched the winning streak to eight with a victory over Purdue last week.

Stroud is in position to make a strong case even stronger in the final two games of the regular season, when the Buckeyes seek to remain atop the Big Ten East with games against their two challengers.

C.J. Stroud balled out today against No. 19 Purdue 😳

He has three games with five pass TD this season, the 2nd-most in a season in Ohio State history. pic.twitter.com/KyBLYJKJsW

Ohio State will play host to Michigan State and Walker III this Saturday, in what could become a statement game for Walker III, before closing out the season at Michigan.

A peripheral factor could work in Stroud’s favor — he has compiled numbers similar to the other top quarterbacks despite missing the Akron game on Sept. 25 to rest a sore shoulder that limited him to 185 yards against Tulsa. Since the Tulsa game he has 22 touchdowns and two interceptions.

Update: Workhorse Walker continues to lead the FBS in rushing yards and yards per carry, and his 6.5-per carry average also leads among players who have at least 165 carries. He has 227.

Status: Walker turned in an eye-popping performance with 197 yards and five touchdowns in the Spartans’ 37-33 comeback victory over Michigan three weeks ago, and another big game here would further burnish the resume, inasmuch as the Buckeyes’ rushing defense has given up only 105.9 yards per game and 3.1 yards per carry.

Bryce Young earns another Offensive Player of the Week award from Touchdown Alabama after his five TD performance against New Mexico State! pic.twitter.com/UnCaLV2lVh

Update: Young played just one series in the second half, losing a fumble, but still managed to get his numbers. He became the first quarterback in school history to complete his first 13 passes in a game, and his m.o. again included relying on speedy Ohio State transfer Jameson Williams. The pair combined for more touchdown passes (three) than Young had incompletions (two). Young led the Crimson Tide to five touchdowns in the final 20 minutes of the first half.

Status: Nick Saban was nice enough to let Young throw for five scores before turning the game over to Bear Bryant’s great-grandson Paul Tyson late in the second half. State funded its program with the $1.9 million guarantee. Young funded his Heisman candidacy.

CJ Stroud played his best game as a Buckeye today. His arm talent is as good as any QB who has come through Columbus

Status: Stroud, like Young, benefits from an extremely talented set of wide receivers, all of whom showed up against Purdue. The top two, Garrett Wilson and Chris Olave combined for 19 catches, 211 yards and four touchdowns against Purdue. Both are projected as first-round picks in the 2022 NFL, and they could be the first two receivers taken.

Update: Pickett has a slight hiccup in the showcase game against North Carolina throwing a late interception on a misguided pass that deflected off his receiver and set up the Tar Heels’ game-tying field goal with 57 seconds remaining. Pickett balanced that with two completions, including the 11-yard game winner, and a five-yard scramble for a first down on the first possession of overtime.

Update: Corral had another workmanlike game against Texas A&M while continuing to play through tender ankles, both of which were injured earlier in the season. Corral left the heavy lifting to running back Jerrion Ealy, who had 152 yards rushing and 34 yards receiving.

Status: Coach Lane Kiffin has severely curtailed Corral’s option running since he took a battering against Tennessee, a coaching move that makes a lot of sense but has moved Corral out the top tier of candidates in what has become a four-horse race.

Update: Rogers led a comeback from a 28-3 third-quarter deficit, the largest comeback in school history, to stun Auburn while posting his fourth 400-yard game of the season. If he could only have a do-over against Alabama — 300 yards, no touchdowns and three interceptions while being constantly harassed in a 55-35 loss.

Status: We say it every week — Mike Leach’s Air Raid offense is pretty close to heaven for a quarterback with an arm. Still, he has to make the correct read and deliver the ball on time and on target. If it were easy, anyone could do it, right? Pat Mahomes, Baker Mayfield and Kyler Murray are among the NFL quarterbacks who developed in that system. For an underdog like Rogers, eight interceptions are too much to overcome.

WAIT UNTIL NEXT YEAR

Update: After a spectacular four-game run, true freshman Williams came down to earth in a big way in the loss to Baylor, throwing two interceptions and gaining only 17 yards on 10 carries while under pressure. Williams even ceded snaps to former starter and Heisman Trophy candidate Spencer Rattler, who may choose to put his name into the transfer portal after losing his job in the second half of the Texas game.

Status: While the electric Williams gained considerable Heisman hype because of his big games against Texas and TCU, he never really had enough reps to dislodge the top contenders, regardless of the oddsmakers’ lines. Maybe Lincoln Riley inserted Rattler last week to give him the feeling he should stay in school for another year. Williams, however, has shown the better arm and athleticism to make him and early, early top 2022 contender.