Now we have come to the individual achievement vs. team achievement portion of the Heisman Trophy selection process.

As well as Kenneth Walker III, Kenny Pickett and Matt Corral have played this season, Young and Stroud are the only remaining candidates, and they are so close that choosing between them requires voters to parse personal numbers and team records as they see fit.

Before we go too far, the criteria set by the Heisman committee is as vague as it is lofty-sounding.

The Heisman is to be awarded to the player “whose performance best exhibits the pursuit of excellence with integrity. Winners epitomize great ability combined with diligence, perseverance and hard work.”

Nothing about most passing yards or better quarterback rating.

The NCAA does not keep stats on pursuing excellence.

Or diligence in that pursuit. Or the perseverance required.

Does Young’s higher totals of 3,901 passing yards and 40 passing touchdowns display more diligence than Stroud’s higher 351.1 passing yards per game because of the one he missed by injury?

It is a call made easier by the fact that Young has one more game to play before the ballots are tabulated and Stroud does not.

Young returned as the favorite for what he did last week in a 24-22 four-overtime victory over Auburn and what he has a chance to do in the SEC title game against Georgia on Saturday.

Stroud had another big game against Michigan, but the Buckeyes’ 42-27 loss at Michigan closed out his regular season

Young had an uneven performance against Auburn, waiting until the final minutes to pull Alabama into the match with No. 1 Georgia, and he did it with the kind of comeback that brings notice.

He completed passes on third-and-10 and fourth-and-seven in the final 90 seconds of the fourth quarter before his 29-yard touchdown pass to Ja’Corey Brooks tied the game at 10 with 24 seconds remaining.

Young threw a touchdown pass in the first overtime, then had two successful two-point conversion scoring passes, the last one ending the game after Auburn failed on its attempt.

Unless Georgia ties Alabama in knots, the Heisman appears to be Young’s for the taking.

This week: No. 3 Alabama (11-1) will play No. 1 Georgia in the SEC championship game Saturday

Update: Young was not particularly spectacular against Auburn until he needed to be, running and passing Bama to a game-tying score in the fourth quarter before more overtime heroics. Part of his difficulty was due to the loss of top receiver Jameson Williams, who was ejected in the first quarter for a targeting penalty on punt coverage. Williams is Young’s big-play connection, and without him big plays were nowhere to be found.

Status: Young has never been a greater favorite than he is this week, and it would take an awful lot — an awful lot — for him to fall behind Stroud in the final week. With its defense, Georgia could be the only team that has a chance to knock him down.

This week: No. 2 Ohio State awaits a bowl assignment

Update: Try as he might, Stroud could not overcome the Buckeyes’ porous run defense in the loss to Michigan that dropped them out of a spot in the Big Ten title game against Iowa and a spot in the CFP Final Four. Stroud was six yards short of his fifth 400-yard game when he was able to dodge the Wolverines’ pressure. Michigan had 297 yards rushing and controlled the ball in the fourth quarter, depriving Stroud of a claiming his own Heisman-worthy comeback.

Status: It is not difficult to make a case for Stroud. He leads the FBS in with 351 passing yards per game, 12 more per game than contender Kenny Pickett and 25 more than Young, because he missed the Akron game while nursing a sore shoulder. Not having one more resume-building chance in the Big Ten title game is a killer.

Update: Pickett passed Dan Marino to set the school season record for touchdown passes with his four against the Orange, a victory that gave Pitt its first 10-win season since 1981 and a 5-0 record on the road. Marino threw for 37 in 1981 and Rod Rutherford tied it in 2003. Pickett is tied with Marino with 79 career touchdown passes, a record sure to fall in the ACC title game.

Status: Pickett’s career year might have been good enough in almost every other year. He threw more touchdown passes this season than he has in his four previous seasons, three as a starter, and bringing unheralded Pitt to the ACC championship game is the kind of thing that makes voters reconsider.

Most forced missed tackles by an RB this season:

Update: Walker, the transfer of the year, had his eighth 100-yard game of the season against Penn State. His 1,636 rushing yards leads the FBS, and his 263 carries were third. He averaged 6.2 yards per carry with that load, the highest among backs with at least 220 carries.

Status: Old school running backs in old school running back-dependent systems have a harder and harder time winning the Heisman in the pass-first game these days, but Walker gave it a run. His five-touchdown, 197-yard game against Michigan was a change-changer, but when Young, Stroud and the others kept piling up the yards, the die was cast.

Update: Corral spent Thanksgiving egging Mississippi State in the Egg Bowl, accounting for 279 yards of total offense and two touchdowns when the visiting Rebels set a school record with 10 wins. Corral led the offense to 24 straight points for a 24-6 lead in the fourth quarter, and the Rebels hung on.

Status: Corral was the best run/pass quarterback candidate, and he was on pace to stay in the race the entire way until an ankle injury suffered at the end of a punishing 30-carry, 195-yard rushing game as part of a 426-yard game against Tennessee forced him to become a stay-in-the-pocket guy, depriving him of the asset that made him special.

Update: Rogers had his 11th game of at least 300 yards in the Egg Bowl to give him 4,449 passing yards this season, tied with Virginia’s Brennan Armstrong for the most in the FBS and the second-most in Division I behind Western Kentucky’s Bailey Zappe, who had 4,993 yards and Division I-high 52 touchdown passes.

Status: Rogers led the FBS with 630 attempts, 222 more than Young and 235 more than Stroud, and because of that was written off by the voting public as a one-tick pony beneficiary of Mike Leach’s Air Raid system, not a bona fide candidate. He has two more seasons to give voters a look. 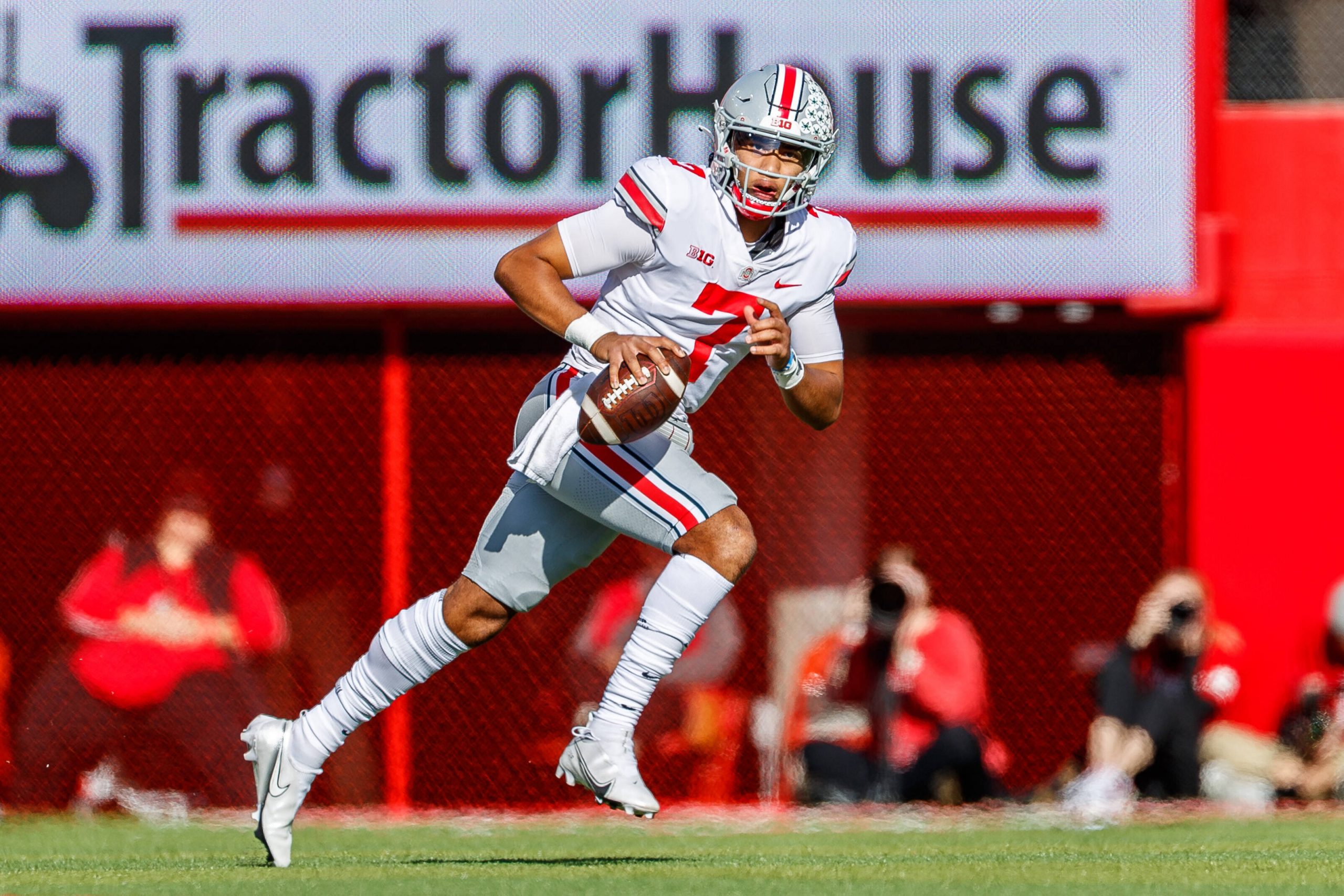