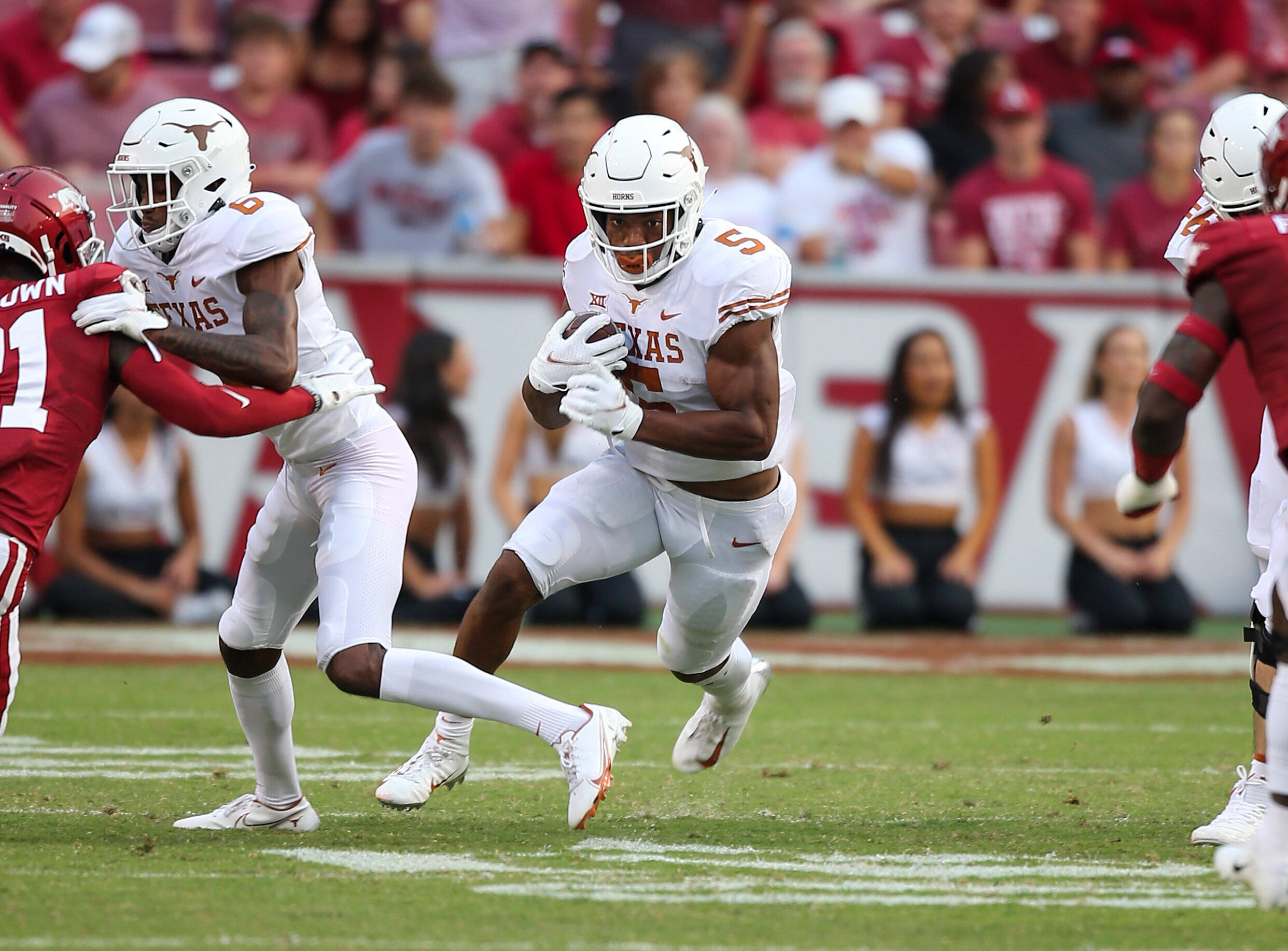 Sophomore Bryce Young continues to put space between him and the rest of the Heisman Trophy candidates as we reach the second week of October, when conference play kicks into high gear.

Young was not statistically overwhelming in Alabama’s dominating victory over Ole Miss and top contender Matt Corral last week, but strong and steady was plenty enough to create a clear delineation between him and Corral.

Pro Football Focus weighed in with an interesting peripheral number on Young this week. Young, who is 6-foot and 194 pounds, has had none of his 150 passing attempts batted down at the line of scrimmage. None. Predecessor Mac Jones had three in his first five starts in 2020.

“It’s probably something that people aren’t going to completely grasp unless they play the position,” Young said on his weekly podcast. “But a lot of times you have to see through lanes and see certain kinds of flashing images and make decisions based off those.

“A lot of that comes from pre- and post-snap knowledge of what’s going on defensively. I’m big on trying to understand as much as I can about a defense and the defenses that we’re expected to get because you don’t really get to see the whole picture like you may be able to on TV. You can only see certain select things and in certain select windows.”

So Young has that going for him, too.

Onto my list. Odds courtesy of DraftKings on Oct. 6.

Update: Young delegated a lot of the authority in the decisive victory over Ole Miss to running back Brian Robinson Jr., who rushed for a career-high 171 yards and four touchdowns. Young complemented with two more scoring  passes and for the most part was his usual accurate self, although he saw as much pressure as he has seen this season and forced one pass into coverage while scrambling, resulting in his second interception of the season.

Status: As he has been since his first two starts, Young is unquestionably the leader in the clubhouse. His numbers, his accuracy and his leadership of a dominant ‘Bama offense — the Tide scored the first 35 points against Ole Miss and led 42-7 — are his selling points. Young leads the SEC with an 185.75 quarterback rating and is fourth in the FBS in both completion percentage and touchdown passes.

Update: Rattler survived the hostile noise that the SEC-bound Sooners will find on every Big 12 road trip this season — except Saturday against fellow deserter Texas — by leading Oklahoma on 75-, 75- and 90-yard touchdown drives for a 27-10 point lead at Kansas State last week. Rattler misfired only three times, with two incomplete passes and an interception, and is second in the FBS in completion percentage behind Coastal Carolina’s Grayson McCall.

Status: Rattler has thrown a touchdown pass in each game, but except for his five-score explosion against FCS Western Carolina, has not had the big numbers you might expect to see. He has thrown for more than 260 yards only once.

Update: Stroud returned to the field after missing a week with a shoulder injury and the time off served him well. Stroud had his best game of the season against Rutgers statistically, with his first career five-touchdown performance. He did not throw an interception for the first time in four games, and his completion percentage, which suffered in early-season games against Minnesota and Oregon, also was a season-best 73.9. “This is what he’s capable of,” Ohio State coach Ryan Day said. “And now he’s got to bring it through and be consistent.”

Status: Stroud still has work to do, but conquering a Big Ten schedule that includes Penn State, Michigan State and Michigan among the final five games will give him a lot of credibility.

Update: Sophomore Rogers jumped into the Heisman race with some gaudy numbers in what was called an upset over Texas A&M, although some may disagree. His 408 yards at Kyle Field was not even his best game of the year — he threw for 419 yards and three touchdowns in a loss at Memphis. Rogers is the only player in the SEC with a 400-yard, three-score game, and he has two of them. No question Rogers benefits from playing in Mike Leach’s Air Raid offense, which floods the field with four wide receivers and is based primarily on quick reads and short throws. Rogers has stepped up in his first full season as a starter after sharing the job with Stanford transfer K.J. Costello before taking over in the final weeks of 2020. He has six 300-yard passing games, second in school history to Dak Prescott (nine.)

Will Rogers: 89.1 PFF Grade this season

Status: Rogers has one thing going for him and another against. Because he plays in the SEC, he is on the national stage in the best conference in the FBS, and voters get to see him more often. The fact that voters are not big on gimmick offenses, regardless of the quality of the player, plays in the other direction.

Update: Corral extended his streak of games with a touchdown pass to 16, but that was about the extent of his work in the matchup of top Heisman contenders at Alabama, which atoned from its porous showing in the 2020 meeting by throttling Corral in his first real test of the season. Corral passed for one score and rushed for another, but he also lost a fumble. He was forced into a bad game script because coach Lane Kiffin put the offense in a hole with three failed fourth-down conversion attempts in the first half.

Status: Corral was decidedly just OK against the No. 1 team in the nation, and it may not get much easier this week. Not only has Arkansas given up as many as 227 yards passing only once this season, the Razorbacks intercepted Corral six times in their 33-21 victory last season. It also does not help that Ole Miss No. 2 wide receiver Jonathan Mingo is expected to miss a good chunk of the rest of the season because of a foot injury.

Update: Fifth-year senior Pickett has stepped up in his final year against what to this point has been a suspect schedule. The last three weeks he has thrown for 382 yards in a loss to Western Michigan, 403 yards against FCS New Hampshire and then last week. Virginia Text and Clemson are first up after the break.

Status: “He’s made a lot of money for himself coming back, I can tell you that,” Pitt coach Pat Narduzzi said. “He’s so smooth, so calm.”

Bijan Robinson = Heisman 👀@RJ_Young says it's time to start talking about the Longhorn running back and the Heisman house:

Update: Robinson blew up in the final two games of the 2020 regular season — 355 yards rushing, 88 yards receiving, seven touchdowns — leading some to expect a breakout season. After a slowish start, Robinson is slowly picking up  steam. He had a career-high 216 yards rushing last week. building on games of 127 against Rice and 137 yards against Texas Tech.

Status: A strong showing at the Texas state fairgrounds this week would keep the train rolling especially inasmuch as Spencer Rattler will be on the other side.

Update: After leading a big fourth quarter in a win over UCLA two weeks ago, Haener had a clunker in Honolulu. Three of his four interceptions came inside the Rainbow Warriors’ 10-yard-line, including one at the 2-yard line with nine seconds remaining. Haener has a big-time arm and he has passed for at least 331 yards in five of his six games this season.

Status: A four-pick game never helps anyone, especially someone who is seldom seen on national TV.

This week: No. 15 Coastal Carolina (5-0) visits Arkansas State (1-4) on Thursday as the Sun Belt chases exposure

Update: McCall runs an option offense that does not require him to pass often, but when he does, no one in the FBS has been as accurate. McCall leads the FBS in completion percentage at 80.2, and his Chanticleers have run through their first five opponents

Status: McCall has done this before. According to Pro Football Focus, McCall had the seventh-best “big-time throw rate” and the fifth-lowest “uncatchable pass rate” in 2020. His passing grade was second only to BYU’s Zach Wilson, who was taken by the New York Jets with the second pick of the 2021 NFL draft. His chances are very slim; he just wins games with remarkable efficiency.