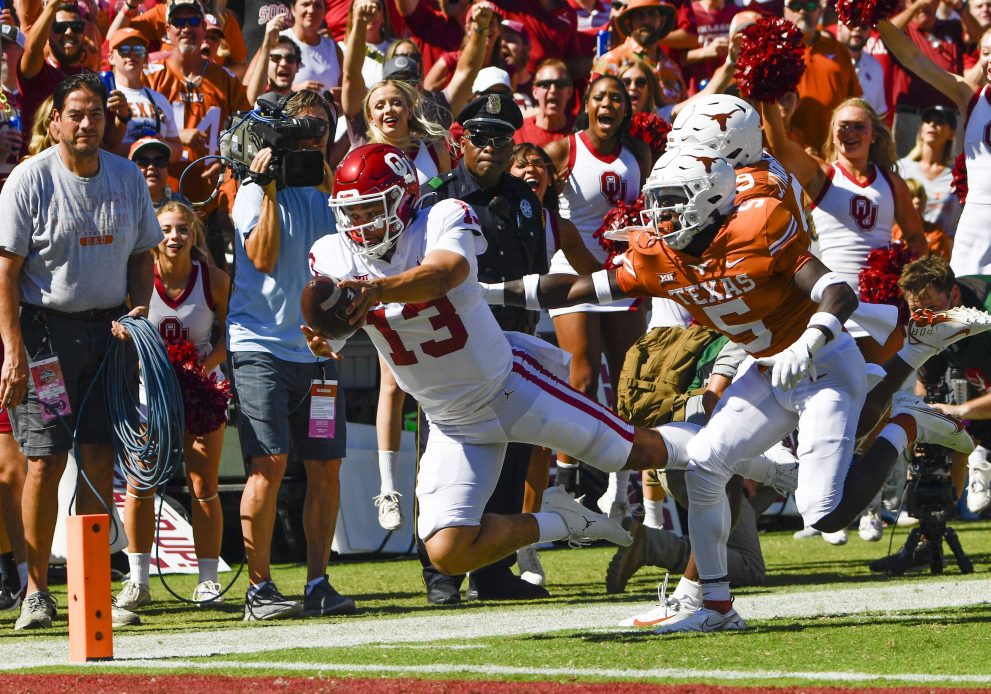 When Caleb Williams has played, he has been pretty spectacular.

Willams combines the speed of former Sooner and 2018 Heisman winner Kyler Murray with the presence of mind that manifested itself last Saturday, when he turned a late fourth-down stop into an impromptu handoff for a first down at Kansas, a play that basically sealed a tougher-than-expected victory.

The question before the Heisman voters at this point: is 2 1/2 games of excellence worth eight games of Bryce Young, seven games of Matt Corral, Kenny Pickett and Kenneth Walker III and six games of C.J. Stroud?

"It's legal. It was behind the line of scrimmage. It may be the smartest play I've ever seen by a player, and he's a freshman."@MikePereira and @DeanBlandino react to THAT play by @OU_Football's Caleb Williams against Kansas ⬇️ pic.twitter.com/XazrsJpuY0

It insults the electors to try to defend that position.

More relevant: Does Williams have enough time to win it?

Probably not. It would not only take continued excellence by Williams but also a series of injuries/bad games/bad luck to the top contenders.

Clemson quarterback Trevor Lawrence missed two games because of Covid restrictions last season, and it cost him. He finished second to Alabama wide receiver DeVonta Smith, the first wide receiver since Desmond Howard (1991) to win it.

Alabama QB Bryce Young has been named SEC Offensive Player of the Week.

Update: Young is surrounded by superior talent, and he continues to take advantage of it week-in and week-out. Wide receivers John Metchie and Jameson Williams have combined for 89 receptions, 1,323 yards and 11 touchdowns, and running back Brian Robinson Jr., has 867 yards from scrimmage and 13 touchdowns.

Status: Young had a career-high 371 yards passing against a Tennessee defense that also had no answer for Ole Miss’ Matt Corral (426 yards total offense the week before), and he has begun to make more plays with his feet. He scored twice on the ground against the Vols and turned three more scrambles into first downs.

Update: Corral suffered an ankle injury late in the Tennessee game Oct. 16 and played hurt against LSU, taking a pain-killing shot before the game that he said wore off in the second quarter. Not to worry. Coach Lane Kiffin game-planned around a less-than-100-percent Corral by focusing on the ground game. The Rebels rushed 50 times for 256 yards and three touchdowns.

Status: After gaining 195 yards rushing and 426 yards total offense in the 31-26 victory over the Vols, Corral had season lows in passing yards (185) and total offense (209) last week, although he did throw for one touchdown and rush for another and complete a season-high 78.3 percent of his passes. While the Rebels got by, Corral slipped a little more behind Young in the Heisman race.

Update: Senior Pickett is throwing the ball deeper and enjoying it more in his senior year, averaging 9.2 yards per attempt, almost two yards greater than in any of his previous four seasons. Pickett’s adjusted average yards per attempt, which gives greater weight to scoring plays of 20 yards or longer as calculated by sports-reference.com, is 10.9, the highest among the Heisman field. He leads the FBS in completion percentage and passing efficiency on throws of 20 yards or more, according to Pro Football Focus.

Pitt records the speeds of each player on each play every game.
The fastest runners are displayed in the facility each week.
No. 1 this week is Jordan Addison
No. 2 is Kenny Pickett, 20.96 mph

Status: It is hard to ignore the numbers. Pickett is one of four FBS quarterbacks with only one interception, his pick the only blip a six-touchdown game in a 44-41 loss to Western Michigan in week three. Pitt has a two-game lead in the loss column in the ACC Coastal Division, so an appearance in the ACC title game could give him another boost.

Last time out: Michigan State had a bye

Update: Walker continues to lead the FBS with 142.2 rushing yards per game, although Syracuse’s Sean Tucker became the first to hit 1,000 because he has played one more game while the Spartans took last week off to prepare for Michigan. Workhorse Walker averages 6.6 yards per carry on 152 carries, and he trails only Tucker in total carries.

Status: A statement game approaches. Michigan has given up only 116.6 rushing yards per game, 24th in the FBS, and has allowed only three touchdowns on the ground. Wake Forest transfer Walker needs to make a big move to overtake Young and Corral et al, and his first game in this rivalry provides ample opportunity.

Update: Stroud has completed 62 of 84 passes (73.8 percent) for 1,002 yards and 14 touchdowns without an interception in three games back after sitting out the Akron game with a sore throwing shoulder. Stroud does not run, but with fellow freshman TreVeyon Henderson and others in the backfield, he does not need to.

Status: The Buckeyes have won Stroud’s last three starts by an average of 41.7 points, all against Big Ten bottom-feeders. His Heisman candidacy rests on his performance against a loaded back end of the schedule that includes prime time games against Penn State, Michigan State and Michigan.

Update: Williams made the play of week last Saturday, when he snatched the ball from stacked up teammate Kennedy Brooks to turn a fourth-down failure into a game-deciding turning point.

Status: Williams enters the week as the highest graded college quarterback (93.9) by Pro Football Focus, and he is the second-highest graded player in the FBS behind Liberty tight end Isaiah Likely. Williams ranks just ahead of quarterbacks Pickett, C.J. Stroud and Liberty quarterback Malik Willis (all 92.6).

Update: Armstrong leads the FBS with 3,220 passing yards, is second with 402.5 yards per game and is fifth with 23 touchdowns passes. It helps that the Cavaliers have the 105th-ranked defense in the FBS and are giving up 433 yards per game, which creates a greater sense of urgency on his side of the ball. Armstrong outshone North Carolina preseason Heisman candidate Sam Howell with a 554-yard, four-touchdown game in a 59-39 loss to the Tar Heels, and he has three other 400-yard games.

Status: The Cavs will be underdogs in at least three of their final four games — at BYU and Pitt, home to Notre Dame and Virginia Tech. Armstrong is a very long shot now, but a good showing against Notre Dame and then against Pickett could open a window.

Status: There is no questioning Henderson’s athleticism, but his lack of touches will be hard to overcome. He did not play in the second half against Indiana, and he has had only three games with double-digit carries. He has reached 100 yards only twice. If his reps jump up, so will his chances (see Stroud, above, about the opportunity remaining.)