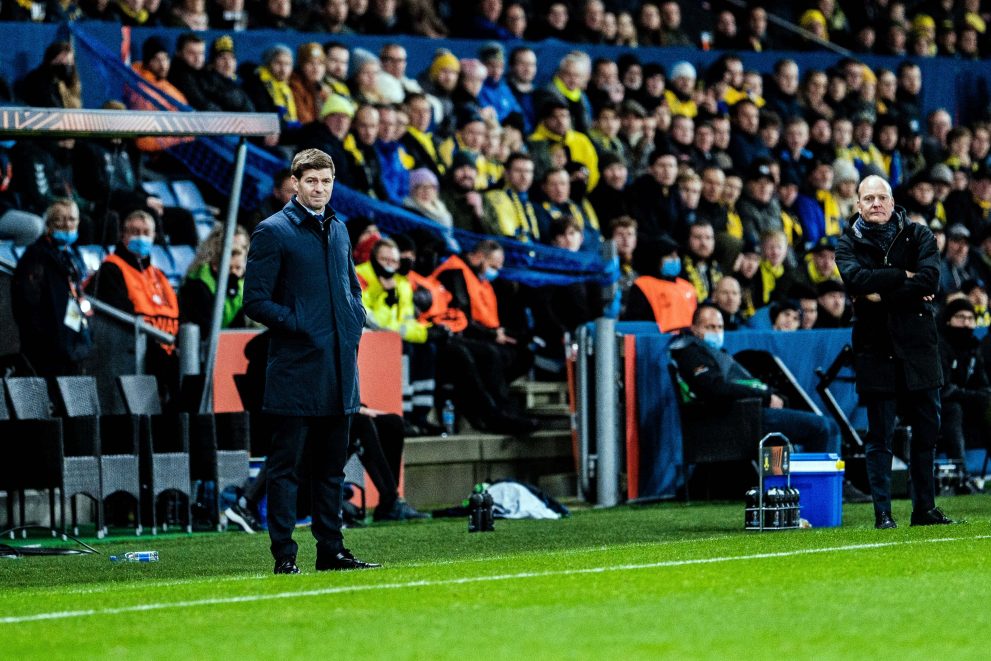 Steven Gerrard has been appointed as Aston Villa head coach by chief executive Christian Purslow, a friend of Gerrard’s from their time together at Liverpool. Purslow has landed his first choice option for the role after the departure of Dean Smith on Sunday.

There is no doubt this is a gamble for Villa – whose ambitious and ruthless owners expect to be challenging for Europe this season after another big summer outlay – but it’s the kind of risk that’s surely worth taking. Gerrard’s incredible 2020/21 season with Rangers saw him end Celtic’s nine-year monopoly of the Premiership in emphatic style: an invincible season in which they collected 102 points and conceded just 13 goals.

His narrow 4-2-3-1 this season uses two number tens behind a central striker, which would be an unusual system to bring to the Premier League, and a drop in form in 2021/22 has raised question marks over Gerrard’s tactical vision. He certainly isn’t someone with a particularly clear philosophy, although he has all the hallmarks of a top manager and the tactical ideas to be a success at Villa Park.

Although Gerrard claims to be influenced by all of the managers he played under in a Liverpool shirt there is little doubt Jurgen Klopp, whom Gerrard worked under while Liverpool academy coach, has had the biggest influence tactically. The essence of the Rangers way has been a high defensive line with an organised press led from the front; reliant on compression between the lines and coordinated, targeted pressure on the opposition straight after losing the ball.

Steven Gerrard to Aston Villa all but done as he finalises his backroom staff. I'm expecting an announcement within the next 24 to 48 hours if not sooner. Christian Purslow set to get his man. Villans; fill in our Villa-Gerrard survey https://t.co/78pqVWZ4yU #avfc

This is accompanied by a possession game that looks to build out calmly from the back, using the mantra of ball retention as the best form of defence. Counter-pressing is preferable – certainly, there is variety in how Rangers score goals, from quick breaks to set-pieces – but they tend to dominate territory and possession, suffocating teams more than countering quickly through them.

This aligns relatively well with his predecessor’s ideas at Villa, although Smith wasn’t particularly clear on the details and often Villa seemed free-form when attempting to construct attacks. Too often it was a case of looking for Jack Grealish. However, the fact that Smith wanted to pay a high-energy pressing and possession game bodes well for Gerrard; Villa have signed the right type of players to do this. Danny Ings and Ollie Watkins, for example, are excellent pressers and they will benefit from more precise instruction from the dugout.

One area the new manager will look to address is a defence that has conceded 20 goals this season. There’s a solid foundation for Gerrard to work with – Ezri Konsa and Axel Tanzuebe have the ball-playing abilities and the speed to function well in a higher defensive line that looks to control possession.  However, the team’s inability to defend set-pieces is a cause for concern. Six of the 20 league goals Villa have conceded this season have been non-penalty set-pieces. Rangers conceded just one in 38 games in 2020/21.

Here’s where the Klopp influence really shows. After initially using traditional wingers in a 4-3-3 or 4-2-3-1 formation at Rangers, last season Gerrard moved his wide players further infield to create a narrow front three. This allows for greater solidity through the middle of the pitch – leaving very little space for the opponent to outmanoeuvre the press – and ensures the forwards are close together for quick one-touch football when possession is won.

In this narrow shape, opponents are inevitably drawn infield to try to cope with the numbers, in turn leaving space on the flanks for aggressive overlapping full-backs in true Klopp style. In the Premiership, last season right-back James Tavernier amassed 12 goals and nine assists while left-back Borna Barisic recorded one goal and six assists, thanks largely to frequent diagonal switches from one flank to the other.

Villa’s Matty Cash and Matt Targett are better going forward than they are defending, and while the former will fit in nicely under Gerrard Villa may well be looking for an upgrade at left-back. As for the narrow forwards, Leon Bailey prefers pressing high from his time at Bayer Leverkusen – note how he struggled to track back in a more conservative setup against Southampton last Friday – but the club needs to sign another winger in January.

River Plate’s Julian Alvarez was a serious target in the summer but Villa couldn’t get a deal done, which is a shame considering the 21-year-old has an astonishing 15 goals and five assists in 16 league matches this season. If he acts fast, Purslow can still snatch Alvarez – albeit at a higher price than was mooted in the summer.

A 4-3-3 with an adaptable midfield

The biggest tactical unknown about Gerrard is how he will configure central midfield, which just happens to be Villa’s biggest problem area. Over the years at Rangers he moved between systems, sometimes using a flat three, sometimes a number ten ahead of two deeper players, and finally, more recently, two free eights advancing either side of a holding midfielder.

Putting precise positional details to one side, what Aston Villa most need is someone to organise them; someone to tell these wayward players exactly where to stand and move, creating some choreography in a team that has improvised for too long. Smith’s Villa often looked lost in possession, without a clear plan for how to construct attacks into the final third and, in theory, Gerrard ought to solve that.

📈 The goal that started the comeback v @ACMilan.

John McGinn’s energy and intelligence will make him a firm favourite, as will the calm control that Douglas Luiz can bring, when he’s in form, at least. Another go at signing James Ward-Prowse in January would complete the set, while Emiliano Buendia should develop into a top number ten for Gerrard and there’s a lot of potential with Jacob Ramsey and Carney Chukwuemeka, should the new manager turn out to be sharp tactical mind he is touted to be.

All in all, Aston Villa and Steven Gerrard are a good fit on paper. But each is taking a risk, each stepping into the unknown at a crucial juncture in their development.

Alex Keble
Alex is a football writer with over a decade of experience, mostly covering Premier League tactics for the likes of Goal, Optus Sports, Football 365 and FourFourTwo. Alex has also worked with Squawka and The Independent and shares opinion pieces on Compare.bet News.