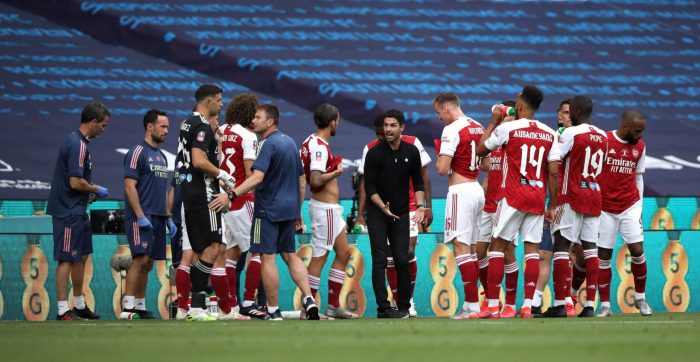 Mikel Arteta continues to prove that Arsenal made the right choice in choosing him as their successor to Unai Emery. Having captured two trophies in the space of a month in the shape of the FA Cup and the Community Shield, it’s been a positive start to the Spaniard’s tenure at the club.

It’s been equally impressive to see Arteta instill so much belief, confidence and determination in his troops who have themselves bought into his methods wholeheartedly, many of which are evidence of his time as Pep Guardiola’s assistant at Manchester City.

Compare the job he’s done to that of his predecessor and countryman, sacked back in November last year, and it’s easy to see that Arteta has managed to rectify many of the issues that arose during Emery’s tenure. Although Emery wasn’t a complete failure and he had his share of ups— including a 22-game unbeaten streak— the negatives outweighed the positives in the end.

To start with, the constant chopping and changing of his lineups didn’t help his players forge strong relationships on and off the field. While there’s a time and place for alterations to be made, his persistent tweaking didn’t help his cause, with the team often appearing disjointed.

Another major problem during Emery’s reign was how severely and regularly Arsenal were exposed on the counter. While the former PSG boss commonly pushed both fullbacks up the pitch and his midfielders into the box, giving them a solid presence inside the area, it also meant they were horribly open at the back. Subsequently, they lacked counterpressing access, allowing their opponents to surge at their sluggish defenders with minimal protection.

Encouraging his side to use a high line, with no pressure on the ball and no players fast enough to chase back on the counter, was a recipe for disaster, not just in transition sequences, but also when the opposition were building more methodically.

Although there were matches where Emery’s men built out smoothly from the back, they often weren’t optimally staggered to beat the press, with their opponents regularly rewarded by Arsenal’s consistent risk taking.  Not helped by individual errors and poor decision making, coming face to face with effective high pressing revealed the setup’s shortcomings all too often.

Thankfully, however, Arteta has gone a long way towards addressing these issues by implementing some improved mechanics. Usually opting for a 4-2-3-1, 4-2-1-3, 2-3-5 or a 3-4-3 formation, there’s been much to admire about how Arsenal have overcome high pressure from the opposition. No matter the shape, the principles have remained the same. Arsenal are always looking to provoke the opposition to press them high before exploiting the spaces in key areas. Whether it be out wide, between the lines, in behind or in the half spaces, they’ve done it all with a great deal of success. 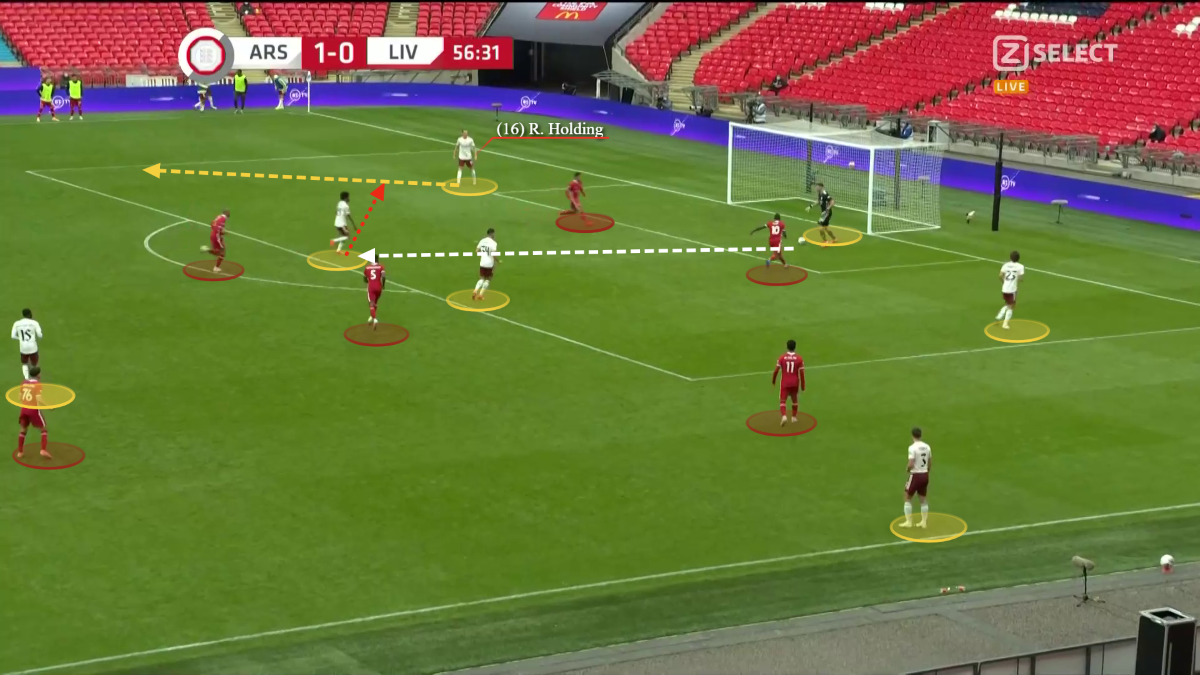 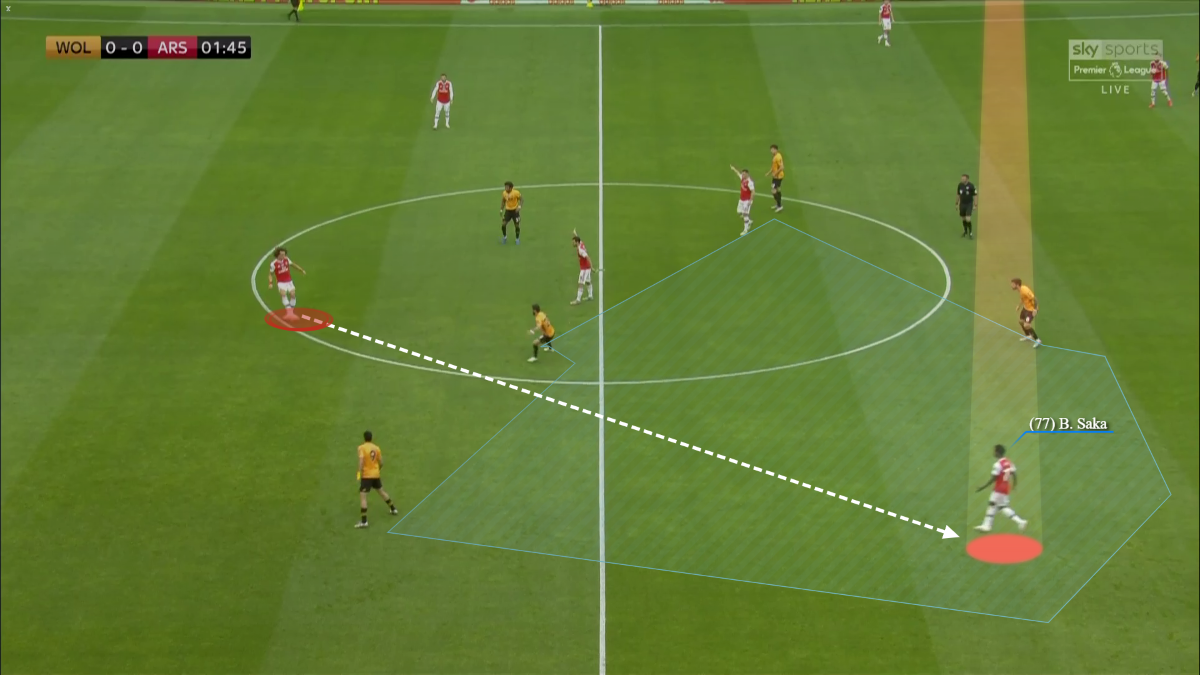 Saka finding room between the lines as Wolves are drawn out 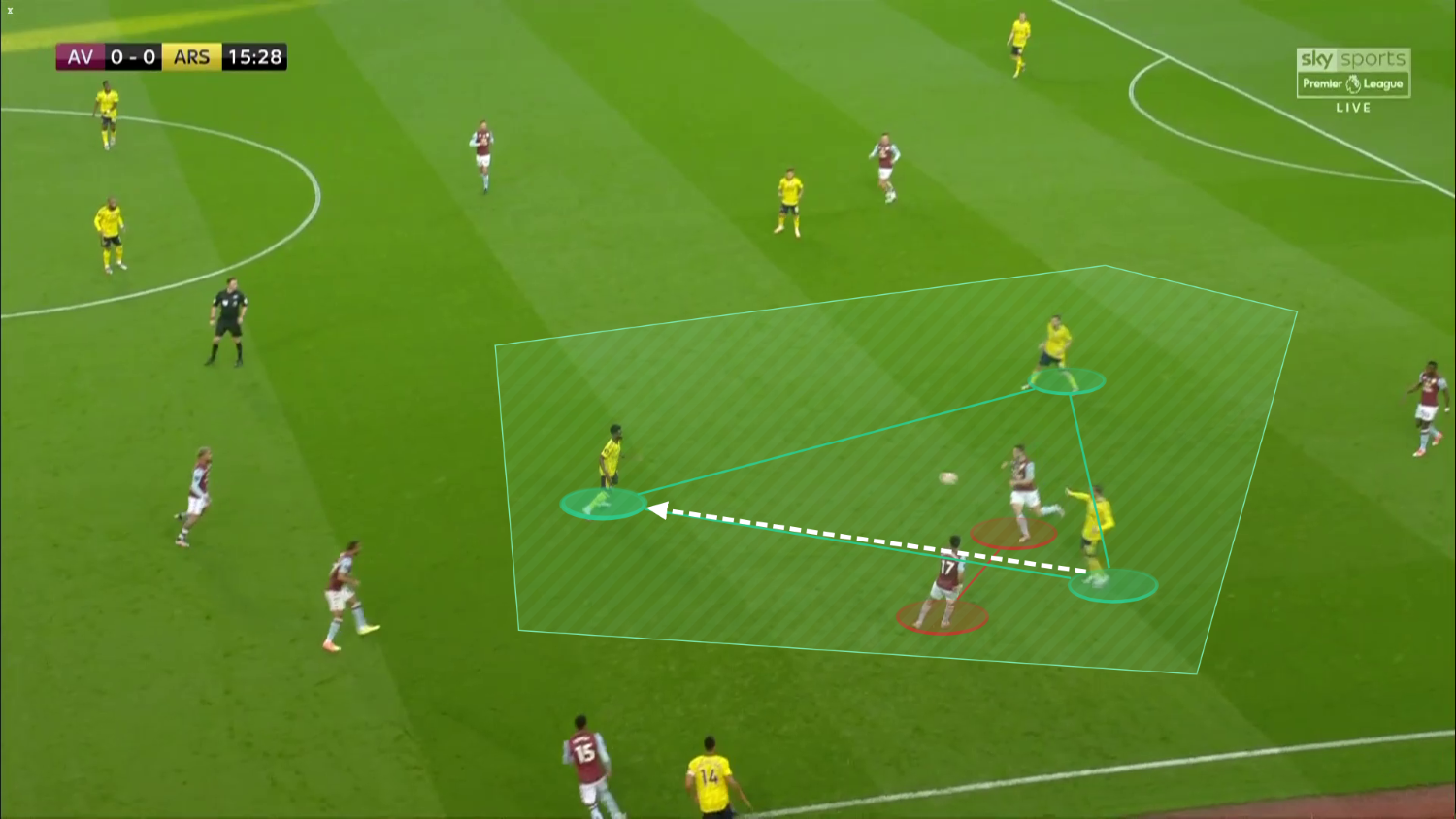 Bypassing the press by forming a 3v2

Their recent Community Shield triumph exemplified many of the hallmarks of Arteta’s philosophy. Building out in a 4-2-1-3 formation in possession, Arteta identified that Liverpool’s front three would press both Emi Martinez in goal and David Luiz and Rob Holding at centre back. As such, by dropping his two holding midfielders of Granit Xhaka and Mohammed Elneny deep near the edge of the box, Arteta was able to draw out two of Liverpool’s midfielders, causing the Reds to press very high and very narrow, leaving room in the wide areas for their fullbacks to receive the ball relatively unchallenged. 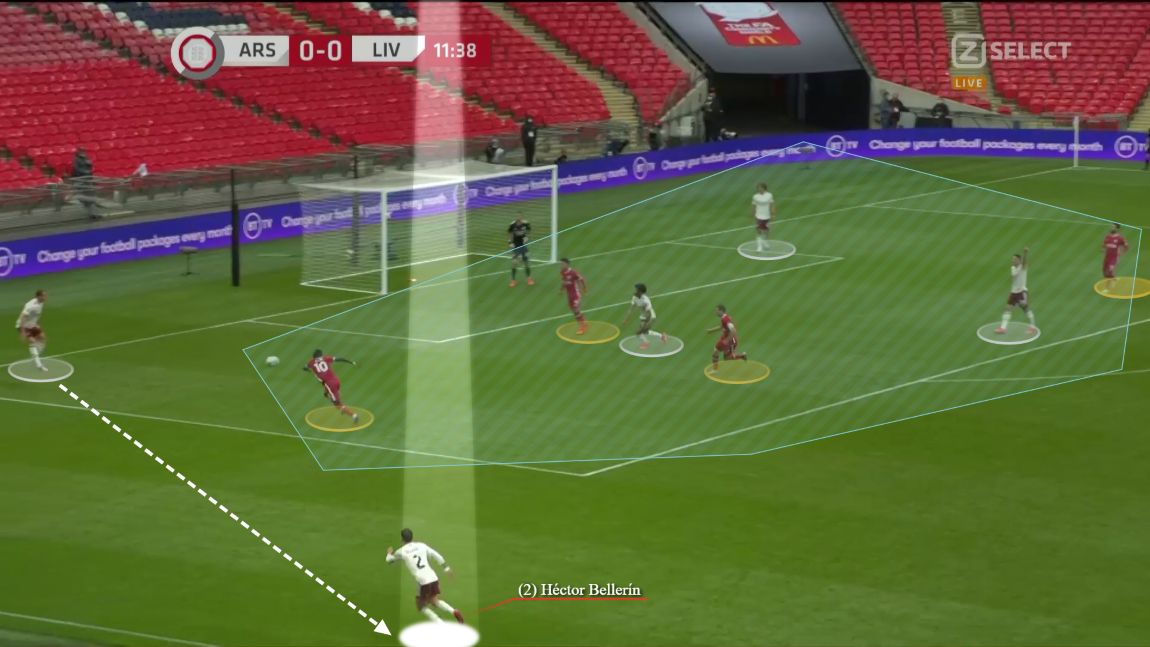 Luring out Liverpool before beating the press in build up

Upon receiving the ball, Liverpool’s covering fullbacks were caught in two minds over whether to press Kieran Tierney and Hector Bellerin, or monitor their closer opponent. They usually got caught somewhere in between, opening up huge spaces in behind and down the channels for the wider forwards in Pierre-Emerick Aubameyang and Bukayo Saka to exploit.

The use of Ainsley Maitland-Niles as a central attacking midfielder in possession also allowed them to connect midfield and attack once they’d broken out from the Liverpool press. The fact he was a wingback out of possession and a midfielder in possession, a role he’s extremely familiar with, also caused marking dilemmas for Liverpool, altering their typical defensive reference points and eventually earning him a well deserved man of the match award.

Arsenal’s goal itself in the 1-1 draw offered a wonderful testament to their tactics, with many of Arteta’s key features apparent throughout the move. Chief among these was their balanced positioning, allowing them to operate with width and depth whilst having the right players to connect passages together.

Possessing such blisteringly quick forwards ensures they can stretch opposition backlines, manipulate their positioning with decoy runs and get free at the back in an instant. Parlaying the above with their shrewd opposite movements and blindside runs gives them a dynamic advantage over more stationary, awkwardly oriented markers. How they use nifty double movements and zig zag runs has been instrumental in separating them from their marker inside the area too. 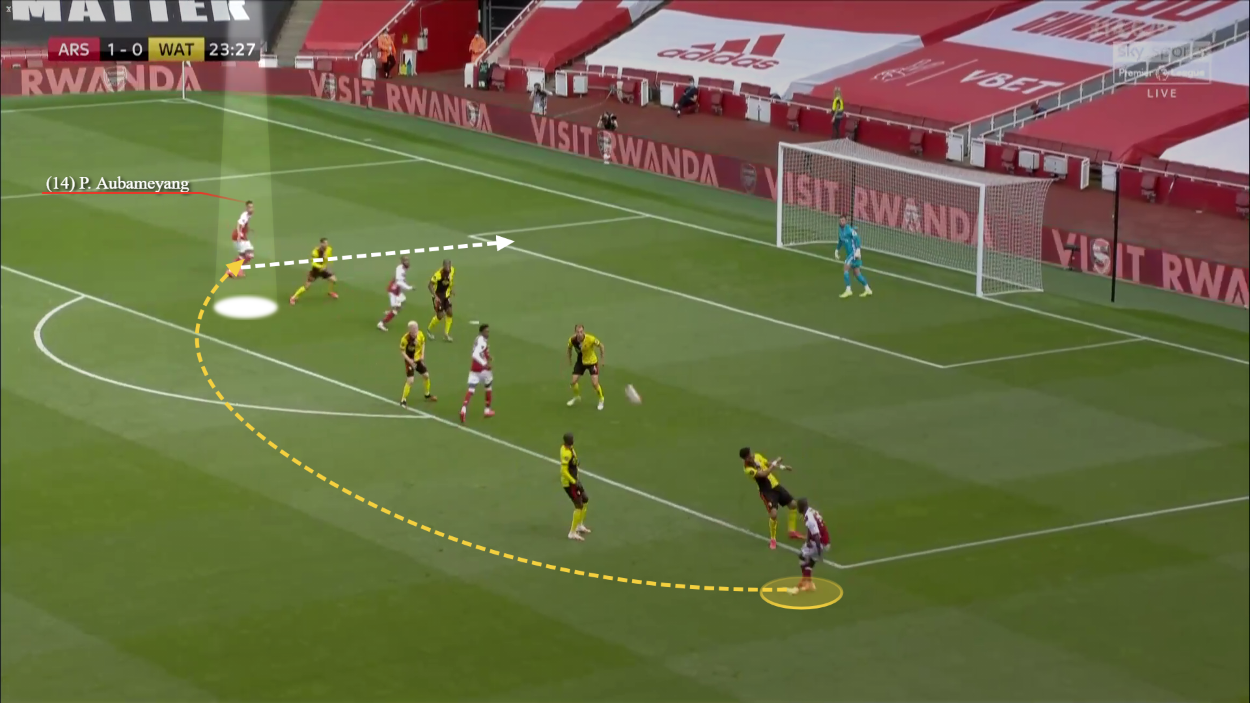 Excellent blindside run in behind 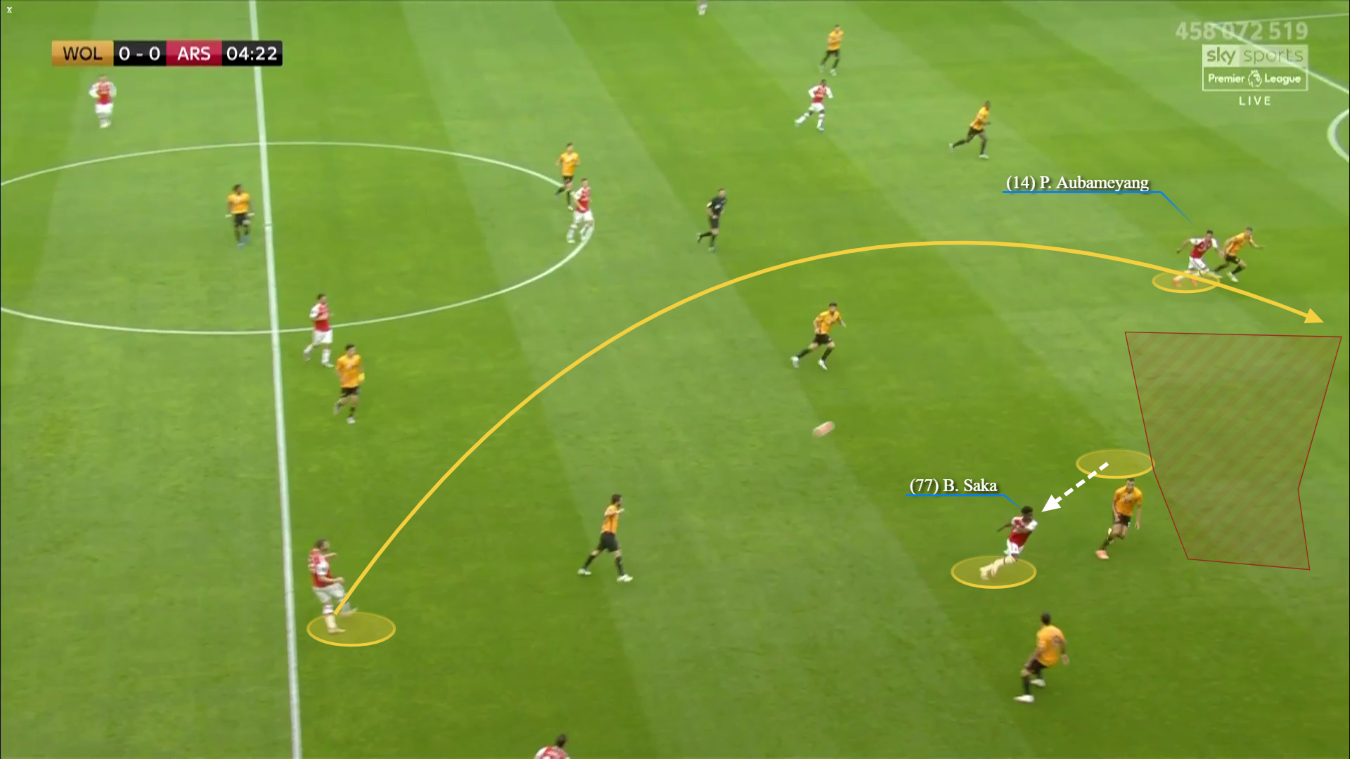 Saka dropping to create space for Aubameyang’s run in behind 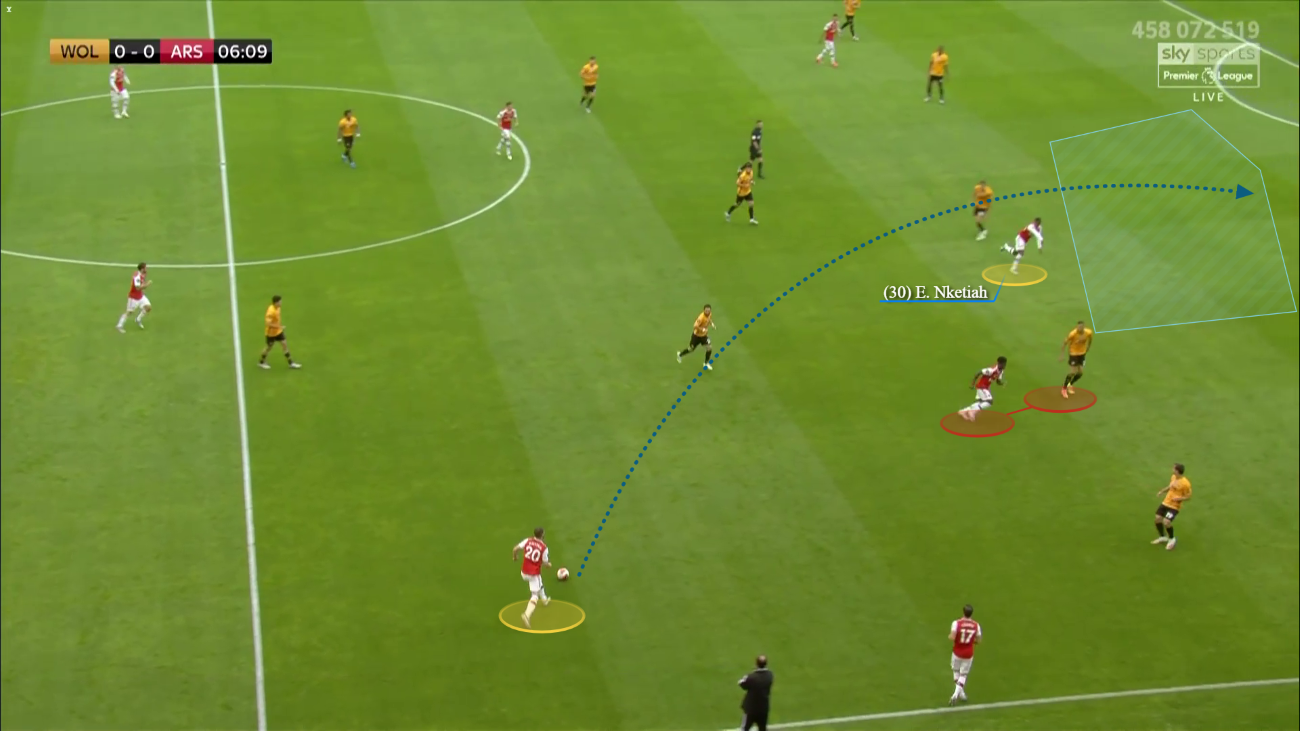 What’s more, the way they’ve executed cohesive rotations is indicative of Arsenal’s squad possessing a far greater knowledge of their roles and responsibilities under Arteta. Be it forwards interchanging across the frontline, midfielders switching with one another, fullbacks swapping with wingers, or central defenders with midfielders or fullbacks, their movement has been positive in manufacturing overloads, as well as confusing their opponents. 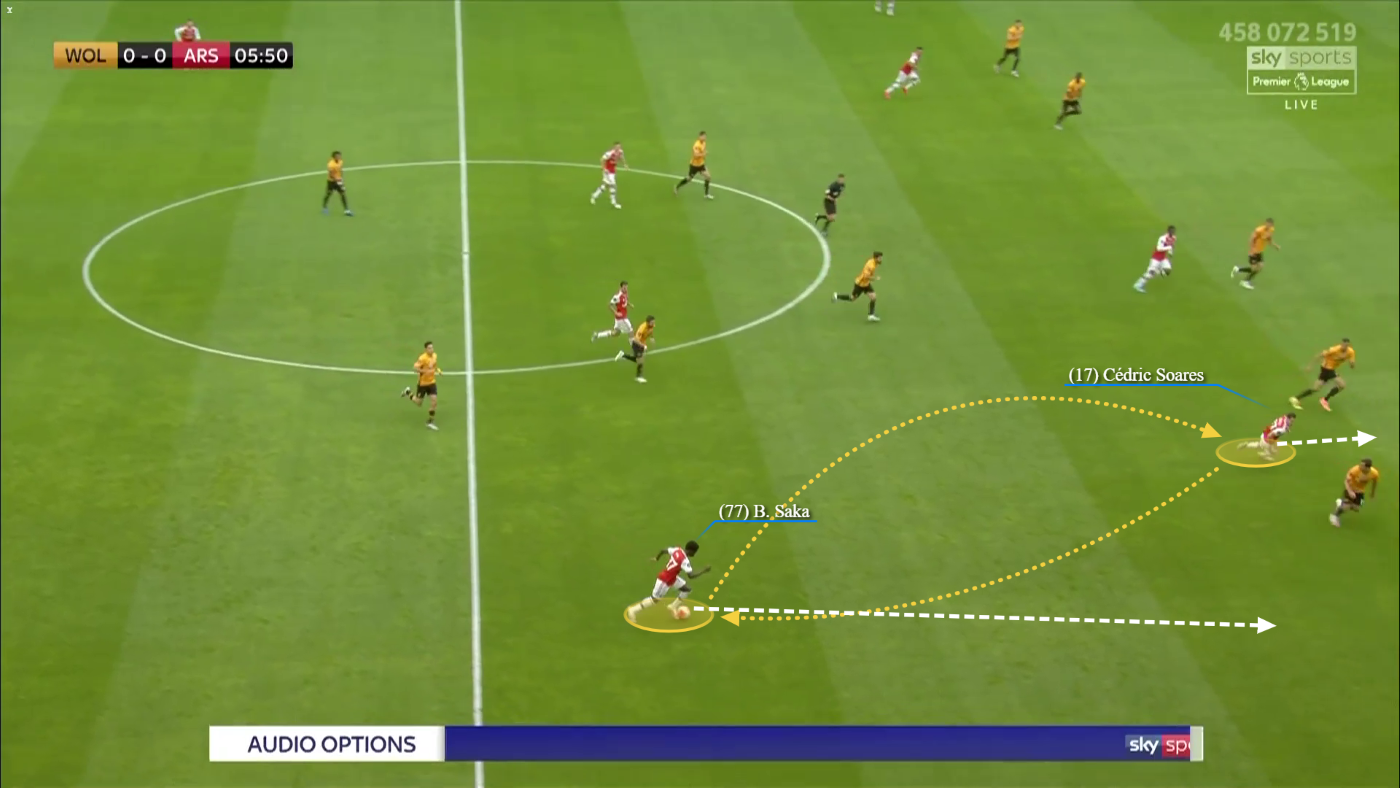 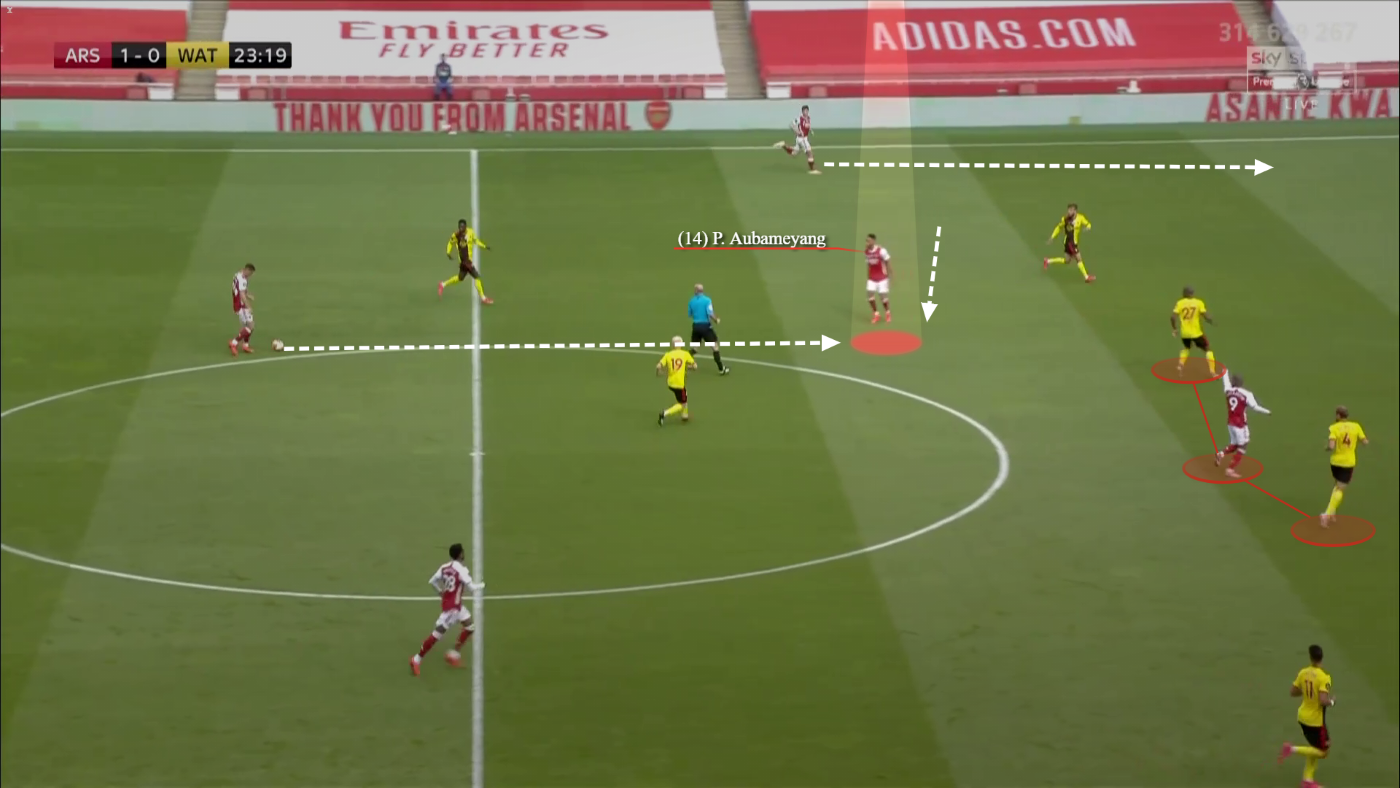 The overload to isolate principle has also been deployed cleverly. As Arsenal funnel an attack down one flank, drawing their opponents over to one side, they then switch it to the underloaded flank to isolate the winger or fullback in a 1v1 situation. 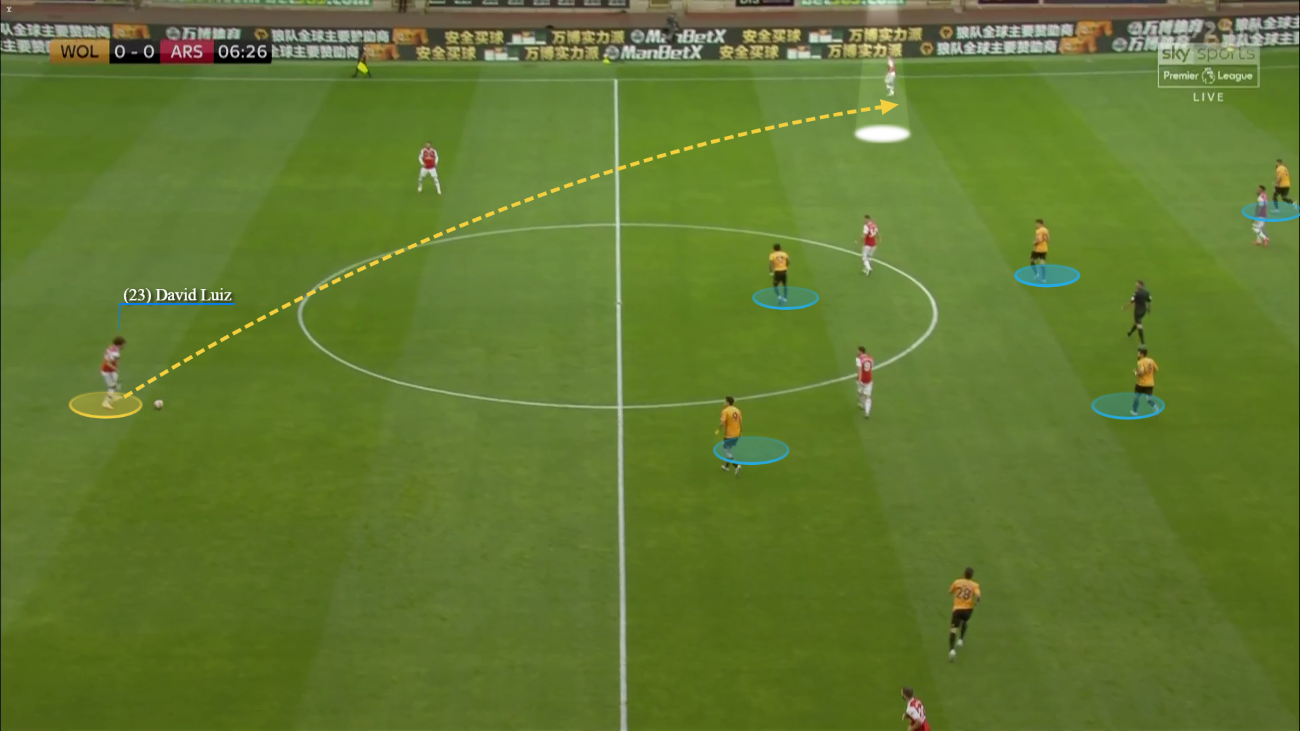 Even though Arteta’s preference has been to play out from the back, however, Arsenal haven’t hesitated to go long when under intense pressure. When they do, they will regularly get large numbers around the ball so as to enhance their chances of regaining the second ball to attack again. 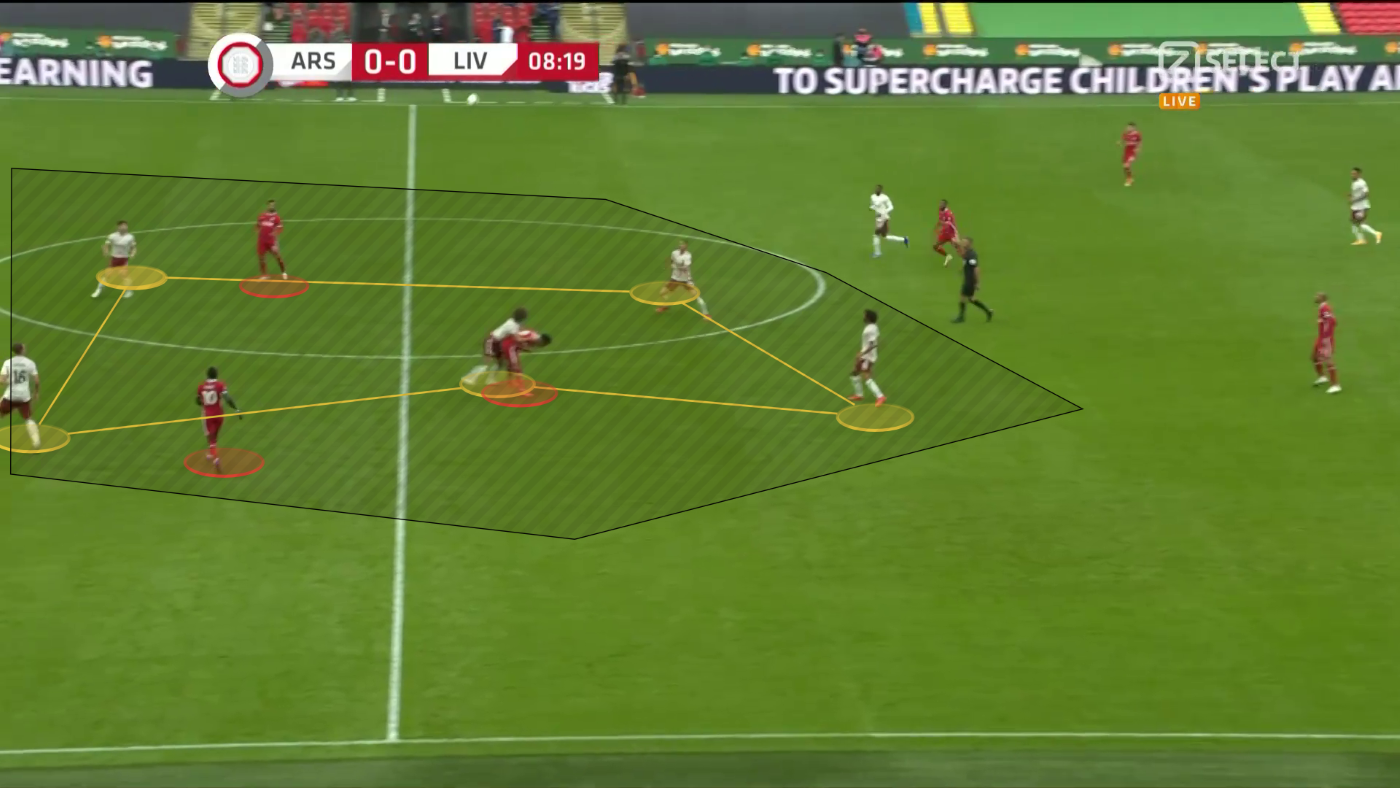 Forming a 5v3 to win the second ball in midfield

Moving the ball quickly and with incision, combined with their slick positioning and movement patterns, has seen Arsenal look unquestionably more assured and precise in possession.

An important by-product of their refinement in possession has been an improvement in their spatially staggered positions, meaning they are much better equipped to counterpress once they turn the ball over. With Arsenal now better able to quickly access the ball holder and shut off nearby passing lanes, Arteta’s men have recovered possession high up the pitch more often, allowing them to get at unset backlines preparing for a counter of their own.

Indeed, in terms of their high pressing, things have progressed nicely, with the players largely sticking to their roles well. Understanding and executing details, like angling their pressure so they can use their cover shadows to block passing lanes behind them, positioning themselves smartly to access two opponents at the same time and changing how they shift their position depending on the ball’s location, have been key. 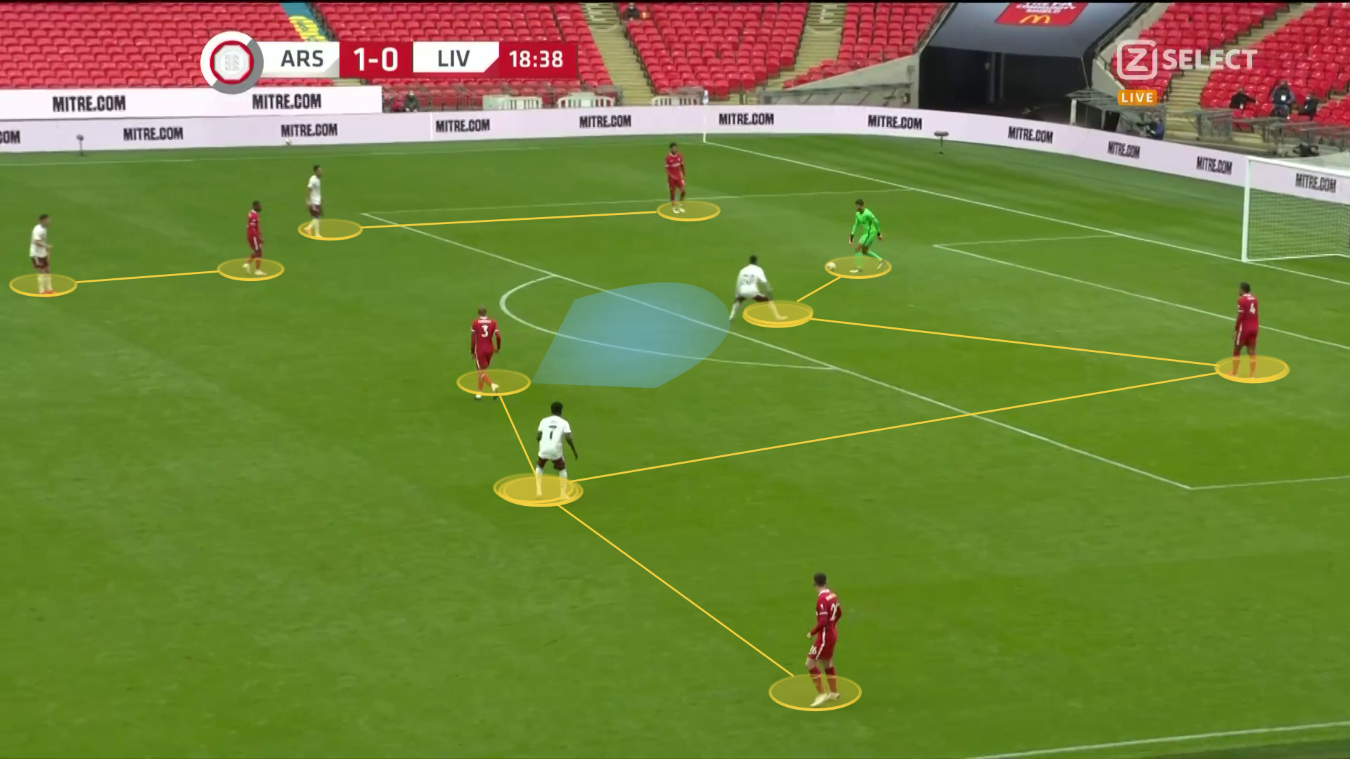 Furthermore, their response to pressing triggers like backpasses, a pass into wide areas where the touchline can be used as an extra defender, an under hit pass or when an opponent is about to receive with their back to goal, have also been crucial in forcing errors from their opponents, if not winning the ball back all together.

While a lot can be said for Arsenal’s pressing game, Arteta’s had no qualms instructing his side to drop deeper. This transition will often see them move into a 4-5-1 formation whereby the wingers retreat to give Arsenal horizontal compactness, ensuring that openings between their lines are minimal. In these cases, they’ll still press following specific triggers, but they’ll largely look to remain in a compact shape, ready to counter at speed once a turnover is achieved.

What’s more, the added security of defending in a back five means that, if a defender leaves his post to track a runner in behind or follows their man deep, the rest of the defensive line are able to shift across and plug holes effectively.

Having impressively got his players on board to fulfill the demands of his system on both sides of the ball, Arteta deserves immense credit for the quality job he’s done so far.

Although there’s still plenty of things to work on, considering he’s not even a year into his tenure, the signs are promising that he can reshape Arsenal into challengers for a coveted top four spot.

Intelligent, hard working, and a crafty tactician, Arsenal’s board will unquestionably feel vindicated for their decision to bring in their former captain back to manage the side. His work has been exceptional so far.