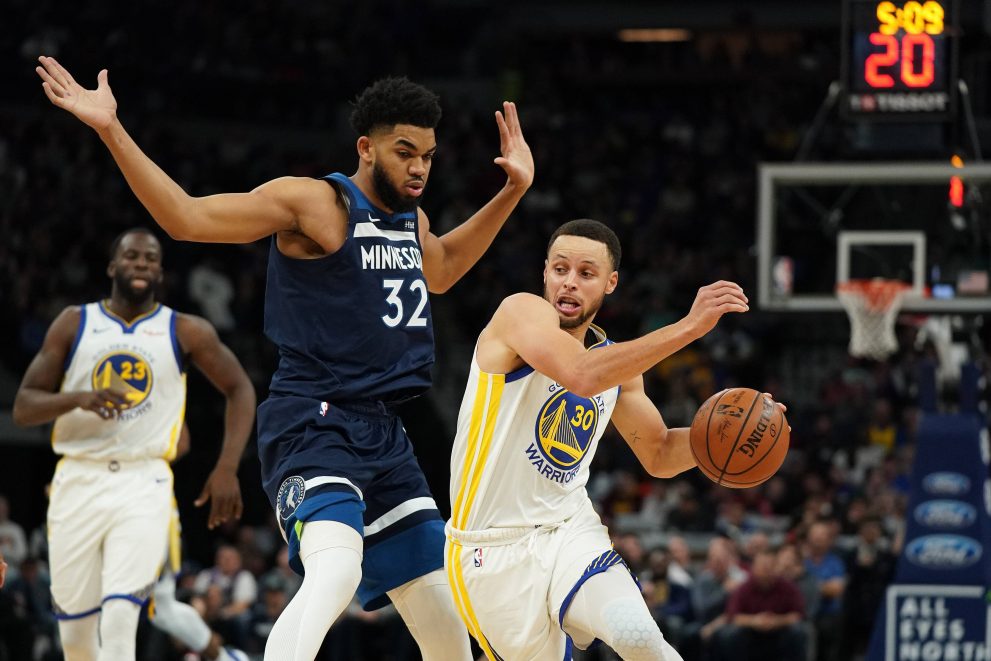 Since the Golden State Warriors fell short in the 2019 NBA Finals, the franchise has undergone significant roster changes.

The Warriors have kept aboard their core three stars of Stephen Curry, Klay Thompson, and Draymond Green, but the roster around them has changed. The team embraced the youth movement with the supporting cast.

Golden State entered last season with low expectations due to the primarily inexperienced roster coupled with Thompson missing the entire year due to a torn Achilles tendon. Despite that, Curry put forth an MVP-caliber campaign that nearly guided the franchise to the playoffs.

The star guard provided more than a reminder that he’s still one of the game’s best talents, leading the league with 32.0 points per contest while shooting 48.2% from the floor and  42.1% from beyond the arc along with 5.8 assists and 1.2 steals per contest.

The front office brought back former Finals MVP Andre Iguodala this offseason, while Thompson is expected to return to the floor as early as mid-December.

Much of the Warriors’ potential return to glory will depend on their star backcourt’s play, especially Thompson proving he can return near to the player he was before the pair of significant injuries.

But even with the Warriors’ guard duo back healthy, it likely won’t be enough to make a significant push toward an NBA title with teams such as the Los Angeles Lakers, LA Clippers, Phoenix Suns, and Utah Jazz better positioned with their roster.

That may guide the franchise toward aggressiveness, to not allow another year of Curry’s prime to go without NBA title contention.

The Warriors won’t have to look very far for an upgrade, as there is an All-Star talent that they have been linked to over the last couple of years. It’s no secret that the Minnesota Timberwolves are under pressure, as center Karl-Anthony Towns hasn’t been the happiest with the situation.

The 25-year-old is only in the third year of his five-year, $158.3 million deal, but the rumblings about his long-term future in Minnesota are growing louder. The team continues to fall short of reaching the playoffs despite a solid young core group.

The noise only grew louder this offseason after the Timberwolves announced that they were parting ways with team president of basketball operations Gersson Rosas. Towns reacted via Twitter posting a tweet stating “wtf…”

Although it wasn’t officially a direct response to the front office move, the timing lines up with the decision. Those factors alone ramp up the pressure on the Timberwolves to be competitive for the playoffs as the team is in a three-year drought since their last playoff appearance.

If Minnesota heads down the same path, it opens the door wide open to the Warriors jumping into the picture to swoop in to acquire the All-Star center. Towns has the billing as the missing piece to what could push Golden State into legitimate NBA title contention.

He is one of the league’s big men that is skilled on both ends of the floor. He can effectively stretch the floor beyond the 3-point line, hitting 39.4% from distance. He’s a proven scorer, averaging north of 21.0 points over the last five straight seasons.

Meanwhile, the Warriors may have the right trade centerpiece to make a deal appealing to the Timberwolves. Although center James Wiseman’s rookie campaign was cut short due to a torn right meniscus, the 20-year-old demonstrated flashes of promise.

In 39 games played, the 2020 No. 2 overall pick averaged 11.5 points and 5.7 rebounds on 51.9% shooting from the floor in 21.4 minutes per contest with 27 starts. Wiseman is still a developing talent, but he holds the skill-set and size that could make a game-changing factor quite over the next couple of seasons.

Steve Kerr isn't sure yet whether rehabbing players Klay Thompson and James Wiseman will travel with the team to L.A. for the quick season-opening trip.

The promise alone with Wiseman may be enough to intrigue the Timberwolves enough to move on from Towns if he wants to leave. Certainly, other pieces to the trade offer must be added, such as additional young talent from Golden State.

If it’s youth that Minnesota is looking to build the roster with, Golden State holds more than enough to offer to make an appealing package beyond Wiseman, such as Jordan Poole, Jonathan Kuminga (when healthy), and Moses Moody.

The Warriors went on a fantastic run when Curry, Thompson and Green were young and healthy, and now that they are getting older, the front office figures to make a push if it sees a chance to compete for another championship.

It’s something that Curry, the two-time league MVP, indicated, as he expects the front office to be “very aggressive” to add talent to improve the team and that he would be bothered if the team was passive.

“Yes, in the sense of we’re having those conversations where you have to be on the same page in terms of what would fill that role and that need,” Curry said at Warriors Media Day last month via NBC Sports Bay Area. “But yes, I would expect all three of those questions to be yes.”

Curry is doing everything in his power to extend his prime, leading him to reach out to Tampa Bay Buccaneers’ star quarterback Tom Brady regarding how to play at an elite level well through the latter portions of his career.

That may be the case, but Curry isn’t getting any younger, underlining the importance to take advantage of the window that is currently present.

The Warriors know what it will take to make a serious bid to secure a talent like Towns, but that remains a situation the team will monitor. The situation in Minnesota doesn’t appear to be heading in the right direction, making it an intriguing matter that could change the picture in the Western Conference this season.

Beyond that, the Warriors have a history of being aggressive to make the most of Curry’s prime, and this season won’t be much different. Time will tell, but the clock is ticking on Golden State and Towns may be there for the taking soon.