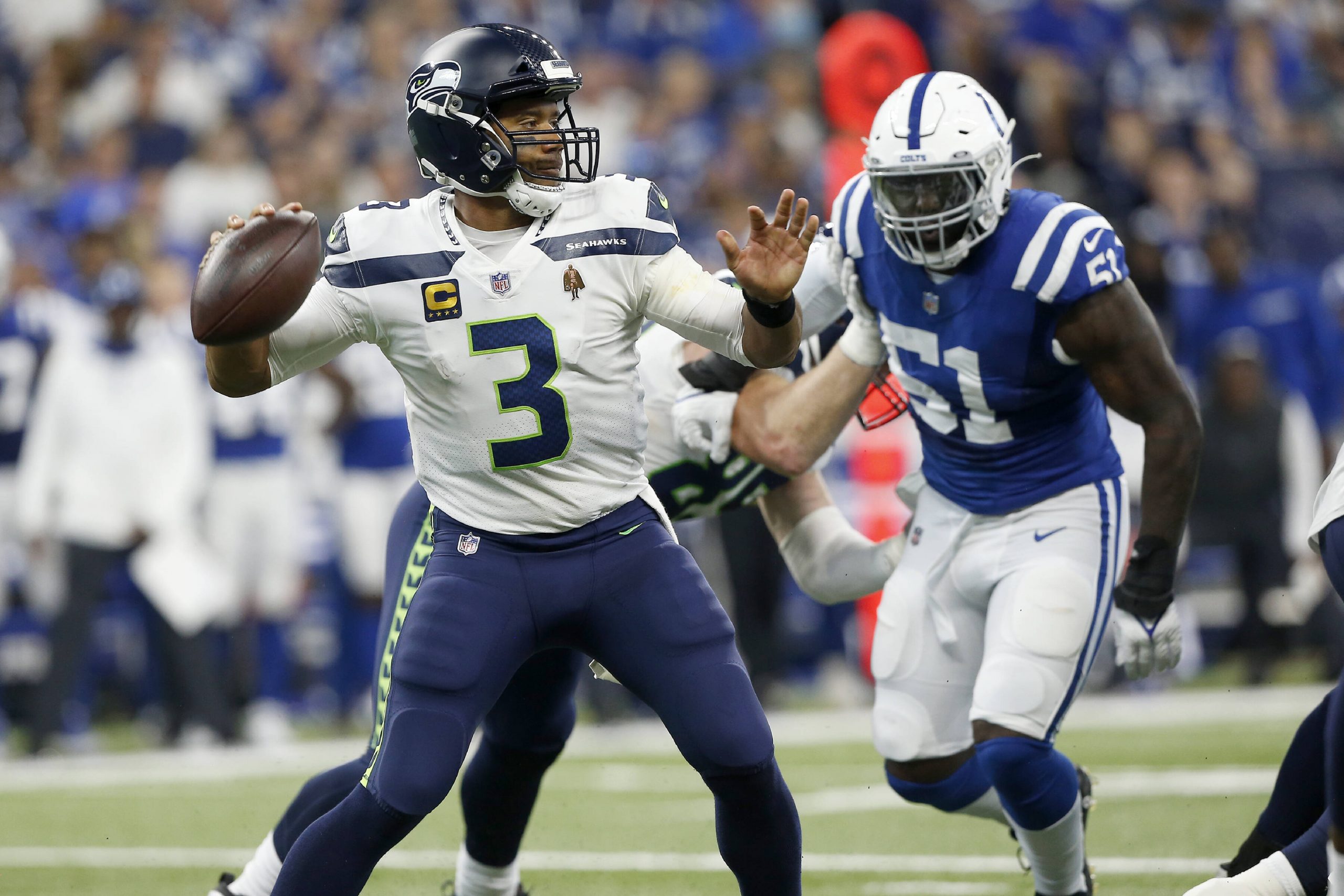 The NFC West flexed in Week 1, as all four teams dominated their opponents. The AFC contenders did not fare as well.

Here is a look at my power rankings heading into Week 2 after several upsets resulted in considerable movement. Odds courtesy of DraftKings on Sept. 14.

The Chiefs trailed for most of the game against Cleveland but rallied for the win. The defense struggled, but Patrick Mahomes, Travis Kelce and Tyreek Hill came up with the big plays in crucial moments. Kansas City remains on top, but has to play crisper moving forward to remain here.

The Cowboys were a tough foe in the opener, but quarterback Tom Brady proved ageless again, throwing for 379 yards and four touchdowns. He had two picks, but one bounced off the hands of Leonard Fournette and the other was on a Hail Mary. Tampa Bay turned the ball over four times against Dallas, and that can’t continue, but the team’s wealth of talent was on display in the opener.

The 49ers dominated Detroit on Sunday, even if the final score didn’t show it. San Francisco led 41-17 with under two minutes remaining before some late touchdowns gave the Lions a puncher’s chance. Quarterback Jimmy Garoppolo was 17-of-25 for 314 yards and a touchdown, averaging an elite 12.6 yards per attempt. Cornerback is the big issue, and a season-ending torn ACL for Jason Verrett added to the concerns there.

Matthew Stafford was as advertised against a good Bears defense on Sunday night, showing off his massive arm strength on multiple deep touchdown throws. He finished 20-fo-26 for 321 yards with three touchdowns and no interceptions. Los Angeles dominated on both sides of the ball to jump into the top-5.

🗣️ GOT IT DONE AT THE #RAMSHOUSE TO OPEN UP 2021! pic.twitter.com/vImzTeLFLP

It was not a great start for Buffalo, which lost at home to the Steelers despite being a comfortable favorite. Quarterback Josh Allen did not play well, finishing with a meager 5.3 yards per pass attempt. Even so, the defense put the shackles on Pittsburgh. This looks like an early blip for Buffalo but nothing to be concerned about.

Russell Wilson was great, per usual, throwing for 254 yards and four touchdowns at 11.0 yards per attempt. The Colts aren’t exactly an offensive juggernaut, but the Seattle did a nice job keeping them in check. New Seahawks offensive coordinator Shane Waldron dialed up the right plays, and if Seattle progresses in that area, its ceiling will be higher this year.

The Ravens were hit hard by losses in the preseason, as their top three running backs and Pro Bowl cornerback Marcus Peters all suffered season-ending injuries. The Raiders piled on Monday night, pulling out a wild overtime victory. Baltimore was in control most of the way before faltering late, and the mounting injuries plus pass-blocking issues are a concern.

The Browns had the most impressive loss of the week, jumping out early on the Chiefs and nearly holding on for the upset. The offense moved the ball efficiently most of the day, and while the defense struggled, that tends to happen against Mahomes. There were a lot of things to build on for Cleveland in Week 1.

It was an ugly opener for Green Bay. Aaron Rodgers finished with the worst Total QBR of the week one year after winning MVP. The track record is so strong that the Packers receive the benefit of the doubt and remain in the top-10, but it’s a new season, and they must turn things around.

The Cardinals had one of the most impressive wins of the week, bulldozing Tennessee from start to finish. Chandler Jones had five sacks and two forced fumbles in the first three quarters, and quarterback Kyler Murray accounted for five total touchdowns. The Cardinals’ defensive line was dominant, and if that continues, the team will be a factor in the NFC.

Drew Brees who? Jameis Winston threw for five touchdowns and the defense suffocated a potent Green Bay offense. In the preseason rankings, I called New Orleans a high-floor, low-ceiling team. If the Saints stack a couple more performances like this one, my idiocy will be exposed.

The Dolphins won a nail-biter over the Patriots, but second-year quarterback Tua Tagovailoa struggled and the rushing attack averaged 3.2 yards per carry. The close win was important, but the Dolphins will need to show more potential moving forward to be considered a true contender in the AFC.

Dak Prescott lacked velocity on his throws because of a lingering shoulder injury, but it didn’t matter. The Cowboys’ quarterback was 42-of-58 for 403 yards with three touchdowns and an interception against a scary Tampa Bay defense. Dallas has to be encouraged by the showing, although the five-game suspension for tackle La’el Collins is a big blow.

Good news: The Steelers’ defense looked really good against an extremely potent Bills offense. Bad news: Ben Roethlisberger had the worst Pro Football Focus grade of any quarterback in Week 1. Pittsburgh will be competitive this year because of its overall talent level, but the passing attack has to click in order for this team to make some noise.

Rookie quarterback Mac Jones had a solid debut, and New England may have won if not for a late-game fumble by running back Damien Harris. Like the Steelers, the Patriots are solid in most facets of the game. Jones’ development is the pivot point.

The Chargers won a close, back-and-forth affair against Washington. Quarterback Justin Herbert threw for 337 yards and the game-winning touchdown to Mike Williams early in the fourth quarter. Los Angeles has playoff hopes, and close wins like this are always crucial.

No team had more first-week movement in these power rankings than the Titans. They entered the opener as three-point favorites but were completely outclassed from start to finish. We knew the defense was going to be bad, but the offensive line was completely overpowered by Arizona, and the vaunted receiving duo of A.J. Brown and Julio Jones did not make its mark. The Titans have to iron things out this week.

Got my ass kicked today, no way around that. I let the team and the fans down. Thank you @chanjones55 for exposing me. It will only force me to get better.

There was a lot to like for Denver in its opener. Quarterback Teddy Bridgewater led the NFL in Total QBR in Week 1, finishing with a mark of 95.7. Running back Melvin Gordon took a handoff 70 yards to the house, hitting 21.52 mph at his peak, which was the fastest among ballcarriers this week. The Broncos were playing an inferior opponent, though, so must prove themselves against better competition.

The Vikings needed a last-second field goal to force overtime and then couldn’t stop Cincinnati in extra time. The offense did not run roughshod over a weak Cincinnati defense, which is a concern. Minnesota can compete in the NFC North if the Packers aren’t as dominant as a year ago, but must play better than it did on Sunday.

It was a chaotic come-from-behind win by Las Vegas on Monday night, but a nice one nonetheless. Maxx Crosby was the story, as the third-year defensive end was a pass-rushing star. The Raiders have a good quarterback in Derek Carr, so if the defense can repeat that type of performance, the playoffs are realistic.

It was a rough opener for Indianapolis. Quarterback Carson Wentz had a nice passer rating but that masked a subpar performance. The defense couldn’t stop Wilson, and while that’s a tough task, the Colts have to dominate on that side of the ball because the offensive ceiling is low.

Second-year quarterback Jalen Hurts was fantastic, throwing for 264 yards and three touchdowns in the easy win. The Falcons’ defense is bad, so Hurts will need to show he can keep doing it against better competition. The Philadelphia defense was even more impressive, completely shutting down Matt Ryan and the Falcons. A great first step for Philly.

My favorite throw from Jalen Hurts on Sunday

I want to see more of this. Stands in the pocket, trusts his protection to pickup the blitz, steps up and delivers a strike to Smith over the middle pic.twitter.com/HL2LfHxc3t

Washington lost a close one to the Chargers, and also lost its starting quarterback, Ryan Fitzpatrick, to a hip injury. Taylor Heinicke will be the guy for the foreseeable future, and while it’s a blow, Washington isn’t completely dependent on its quarterback to win games. WFT will try to keep pace with the Cowboys in the NFC East until Fitzpatrick gets back.

Christian McCaffrey proved why he’s the best running back in the NFL in Week 1, amassing 98 rushing yards and 89 receiving yards against the Jets. The Panthers didn’t knock anybody’s socks off with the win, but the defense played well. It’s a start.

The Bengals came away with a solid opening-week victory at home over the Vikings. Cincinnati still is unlikely to compete for a postseason berth, but progress is important this year. Running back Joe Mixon and rookie wide receiver Ja’Marr Chase were both impressive.

It was an ugly debut for new coach Arthur Smith, who could not get anything going on offense. The Falcons have a veteran quarterback and a pair of elite pass-catching talents in Calvin Ridley and Kyle Pitts, so better days should be ahead. But this was not good.

Is it the Justin Fields era yet? Andy Dalton was overmatched on Sunday night, albeit against a great Rams defense. Chicago’s defense could not stop Stafford, as the Bears looked outclassed the entire way. The season could be over before it starts if the Bears don’t fix things quickly.

Saquon Barkley could not run the ball. Daniel Jones did not make a big impact throwing it. The defense struggled. Not good, Bob.

The Texans were an almost unanimous pick to be the worst team in the NFL this season. They certainly were not that on Sunday, rolling past the Jaguars. This was a battle between two bad football teams, so expectations aren’t going to raise too much, but Houston hopes to be better than expected.

A late comeback masked all the issues against the 49ers, and now cornerback Jeff Okudah is done for the year with a ruptured Achilles. Detroit is certainly going to go through its growing pains this season.

Zach Wilson had his moments against the Panthers in his NFL debut, but the Jets still only managed a pair of touchdowns. The protection has to get better in order for Wilson to have a shot at a productive rookie campaign.

The Jaguars had a winnable matchup to begin the season but were not even competitive. Thus, the drop to No. 32 in the power rankings. Nowhere to go but up, at least.