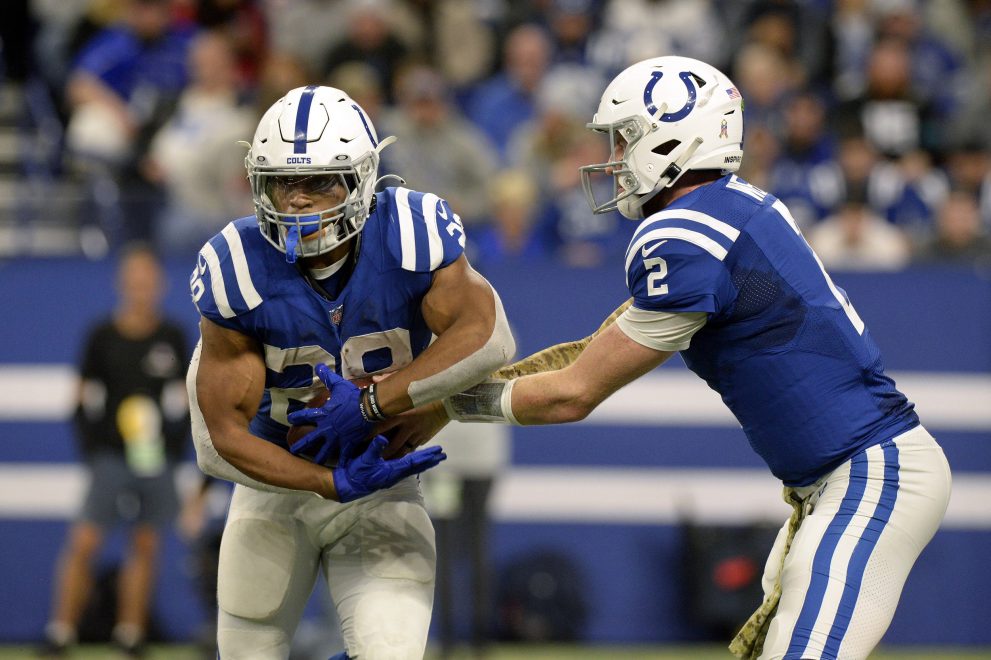 The standings are packed tightly in both conferences, so the playoff ramifications are mounting with each passing week. The Packers-Rams game highlights the Week 12 slate, while there are several other key matchups. As for the Falcons-Jaguars and Jets-Texans games, well, that’s why sports gambling exists.

Here is my favorite bet for each game this week. Odds courtesy of DraftKings on Nov. 26.

The reason: This is a fascinating matchup of strength against strength. Taylor leads the NFL in rushing yards (1,122), rushing touchdowns (13) and rush yards over expected (322) this season while averaging a robust 5.8 yards per carry. He has averaged a mind-boggling 132.5 rush yards per game over the past six. However, the Bucs are phenomenal against the run, and star nose tackle Vita Vea is expected back for this game. Look for Tampa Bay to load up against the run in this game and keep Taylor under this total.

The reason: The Patriots have a great defense, and Tennessee is missing key offensive pieces Derrick Henry and Julio Jones. Even so, this point total is too low. The Titans still have an upper tier quarterback in Ryan Tannehill, and he should be able to make enough plays to help his team put up enough points to surpass this conservative total.

Happy Thanksgiving to Titans offensive coordinator Todd Downing, who called play-action on just six of Ryan Tannehill's 54 dropbacks against the Texans. All four of Tannehill's interceptions (with some really bad reads) were thrown without play-action.

The reason: The Giants continue to burn me, but I can’t quit them. Offensive coordinator Jason Garrett was fired this week, and the installation of Freddie Kitchens as the play-caller could help give the offense a spark. The Eagles have played really well lately but the Giants should play well enough at home to cover.

The reason: Interestingly, Burrow and Steelers quarterback Ben Roethlisberger have the same passing yardage over/under, but the more confident play is Burrow. He has thrown for more than 256 yards in seven of the team’s 10 games this year and is facing a Steelers defense that could once again be short-handed due to injuries. There is the concern that Cincy can take control of this game and take away from Burrow’s attempts, but if the contest is close, the over should hit.

The reason: Carolina lost an important game last week to Washington but it does feel like Cam Newton is going to bring it a much-needed dimension on offense. The Panthers have to execute well down the stretch in order to make the playoffs, and winning this game is key. Look for the defense to lead the way against a Miami offense that is among the league’s worst.

The reason: Tyrod Taylor is not a great player, but he is a steady presence at quarterback for the Texans, who have proven to be a much better team when he is on the field. Taylor limits his mistakes, which can’t be said for Jets quarterback Zach Wilson. Houston has the upper hand at the most vital position on the field, which should help it cover this spread as a rare favorite.

DC Jeff Ulbrich says Texans QB Tyrod Taylor is “an absolute pain in the ass.” Meant that as a compliment: Praises his speed and competitiveness. #Jets pic.twitter.com/ayMJiGxPaR

The pick: Jacksonville (+110) on the moneyline

The reason: Both of these teams are putrid, and it’s a mild surprise that Atlanta is a road favorite after getting shellacked by the Patriots last time out. The Jaguars could certainly blow this, but they are certainly the better value. Keep an eye on any health updates for Falcons running back Cordarrelle Patterson. He is dealing with an ankle injury and is one of the few game-breaking talents in this contest.

The reason: The Chargers are up to No. 3 in Football Outsiders’ offensive efficiency and quarterback Justin Herbert is now No. 2 in ESPN’s Total QBR. The Broncos have long been known for their defense, but it’s the offense that has been the more effective unit in 2021. This game will likely have more points than expected.

The reason: The 49ers have given Samuel 13 carries over the past two games, and he is averaging nearly nine yards per carry on those totes. San Francisco would seemingly be well-served to continue that trend. If that happens, Samuel will be less available on the outside to catch passes, which makes the under the way to go on his receptions prop.

#49ers' Deebo Samuel is the first WR in the Super Bowl era with 3+ rushing TDs in 2 of his first 3 career seasons.

The reason: These teams have similar records, but the Rams are the superior team by advanced metrics. Even though it is on the road, Los Angeles has a good shot at pulling out the win, which would be critical as the top NFC teams jockey for positioning. The Rams didn’t play well in their first game with Von Miller and Odell Beckham in the fold, but look for that to change in this one.

The reason: Chubb is one of the best running backs in the NFL, and with quarterback Baker Mayfield struggling, Cleveland will likely lean on him to churn out the yards. Jackson always gets a big chunk of yards on the ground, and could amass more than usual in this one. Cleveland has a solid pass-rush, which will force Jackson out of the pocket and on the run multiple times, which will add to his total.

The reason: It’s a slight surprise to see Seattle as the underdog in this game. Russell Wilson certainly hasn’t looked like himself after returning from injury, but has the capacity to turn it on at any time. The Seahawks have to be nearly perfect down the stretch to make the playoffs but they should keep that hope alive with a win this week.