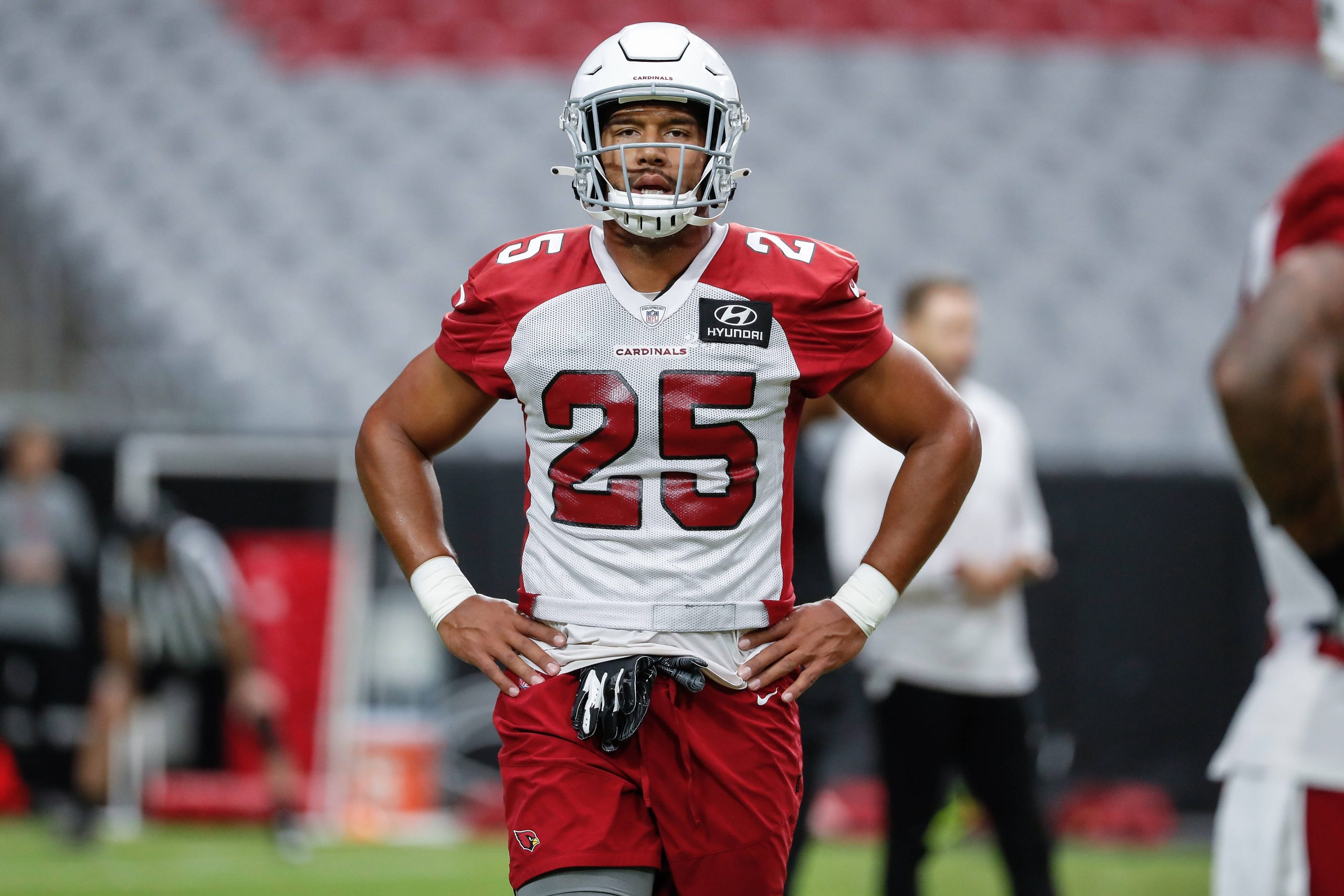 Micah Parsons was on center stage at the Hall of Fame Game last week, recovering a fumble three minutes into the action.

The Dallas Cowboys’ first-round pick played sparingly in the contest, but still finished with three tackles and the takeaway — a reminder of how quickly inside linebackers can pile up statistics in the NFL.

The position has been devalued by front offices in recent years, but that isn’t the case when it comes to 2021 Defensive Rookie of the Year odds. Parsons, the No. 12 overall pick in April, is the favorite to win the award at +500, per DraftKings on August 9.

Cowboys LB Micah Parsons on early takeaway: “I actually had a fumble recovery my first game in college. So I like the trend that is going on right now.”pic.twitter.com/P99wfSviDa

Washington Football Team linebacker Jamin Davis, the No. 19 overall pick in the draft, has the second-best odds at +750. Jaycee Horn was the first defender drafted, but the Panthers cornerback has odds of only +1400 odds to win DROY.

There was no blue-chip defensive talent in the draft — offensive players were selected with the first seven picks — which makes this an open race. While Parsons and Davis have the eye of oddsmakers, there is yet another inside linebacker drafted in the first round that could be a good value play for Defensive Rookie of the Year: the Arizona Cardinals’ Zaven Collins at +1400 odds.

The Case For Zaven Collins

Every team wants its first-round pick to see substantial playing time from the get-go, but in reality, it’s far from a guarantee. In 2020, eight of the 14 defensive players chosen in the first round played fewer than 55% of their team’s snaps.

Lions cornerback Jeff Okudah (41%), Cardinals linebacker Isaiah Simmons (34%) and Jaguars cornerback C.J. Henderson (42%) were in that group despite being selected in the top-10. While Okudah and Henderson battled injuries, neither made a particularly great impression when on the field.

Perhaps spurred by Simmons’ lack of early impact, Cardinals general manager Steve Keim anointed Collins a three-down linebacker moments after the team drafted him, moving veteran Jordan Hicks into a backup role. As long as Collins doesn’t completely fall on his face early in the season, he is expected to play the vast majority of the team’s defensive snaps, which gives him the opportunity to make splash plays.

At 6-foot-4 and 260 pounds, Collins is built like an old-school middle linebacker, and thus should hold up against the run and rack up tackles. Two years ago, Hicks finished the season with 150 tackles, three interceptions, six pass deflections, two forced fumbles and 1.5 sacks.

Collins seems like a virtual lock to surpass 100 tackles if he plays full-time, and while that number wouldn’t necessarily reflect how well he is playing, it could have an impact on votes.

Collins will be playing next to Simmons at inside linebacker, and the Cardinals’ front will include pass-rushers J.J. Watt and Chandler Jones. If the former All-Pros can consistently pressure the quarterback, Collins figures to benefit in the form of a couple interceptions.

Additionally, Collins will likely force a few fumbles and recover a couple more considering how often he will be around the ball.

All of these things can be similarly said about Parsons and Davis, who figure to have integral roles in the middle of the Dallas and Washington defenses. However, Collins has the longest odds among the trio, which could be the best value.

Here is a look at all the other top contenders for NFL Defensive Rookie of the Year. Odds courtesy of DraftKings on August 9.

Linebacker Micah Parsons, Dallas Cowboys (+500): The Cowboys were awful defensively a season ago, which could play into Parsons’ favor, as he could get some credit for a turnaround. The former Penn State star slid slightly in the draft but has immense physical tools. He will need to find enough playing time, as starting linebackers Leighton Vander Esch and Jaylon Smith are currently ahead of him on the depth chart, but the ceiling is high for Parsons.

Linebacker Jamin Davis, Washington Football Team (+750): Coach Ron Rivera relied on Luke Kuechly to captain his defense in Carolina, and Davis is already drawing comparisons to the perennial Pro Bowler. He has much to prove in order to rival Kuechly, but it’s a promising start. Davis has the luxury of playing on a talented defense. Last year’s NFL Defensive Rookie of the Year, Chase Young, is on the cusp of superstardom, while pass-rusher Montez Sweat and defensive backs William Jackson III and Kendall Fuller are also potential stars.

Edge rusher Kwity Paye, Indianapolis Colts (+1000): The Colts have been hit hard by injuries to the offense in training camp, as quarterback Carson Wentz and star guard Quenton Nelson are expected to miss multiple games with foot injuries. The defense will need to step up, and Paye has earned early praise for picking things up quickly. He is a high-upside player who only had 11.5 sacks over 28 college games at Michigan, and will need to produce as a rookie to be in the running.

Edge rusher Jaelan Phillips, Miami Dolphins (+1000): Phillips joins Paye as the pass-rushers with the best odds to win Defensive Rookie of the Year. He had an up-and-down college career, but put it all together in 2020 by accumulating eight sacks and 15.5 tackles for loss in 10 games. Phillips has missed the start of camp with an undisclosed injury, which should be watched closely as the season gets closer.

Cornerback Jaycee Horn, Carolina Panthers (+1400): Horn is making a positive impression during training camp, as he already has three interceptions early on. If the former South Carolina cover man can continue that rate of production in the regular season, it will turn heads and garner votes. A.J. Bouye is suspended the first two weeks of the season, so Horn should start for at least those games. He can cement his spot by playing well, but penalties are an issue for the physical cornerback.

First play of 7-on-7 in RZ, Sam Darnold pass deflected by Jaycee Horn, intercepted by Jermaine Carter. So three picks and an assist for Horn this camp.

Cornerback Patrick Surtain, Denver Broncos (+1400): Surtain was taken one choice after Horn in the first round. Many believe he is the superior cornerback, so it’s not a surprise that they have identical odds heading into the season. One issue for Surtain could be playing time. Denver has a deep cornerback group which includes Kyle Fuller, Ronald Darby and Bryce Callahan. If Surtain struggles, the Broncos have other options.

Linebacker Jeremiah Owusu-Koramoah, Cleveland Browns (+1400): It was a surprise to see Owusu-Koramoah drop to the second round of the draft, and Cleveland was happy to grab him at No. 52 overall. The Cleveland defense struggled a season ago and there is playing time available if Owusu-Koramoah can seize it. He began training camp on the COVID-19 list but has since been activated.

Edge rusher Azeez Ojulari, New York Giants (+1600): It’s interesting to see Ojulari up this high as well, as he wasn’t chosen until the No. 50 pick in the draft. However, if Ojulari can put up some shiny sack numbers in his rookie season, he could be in the mix. The past two winners — Young and Nick Bosa — were pass-rushers, and the position is so valuable that the top candidate from it will often be a main contender. The last second-round pick to win Defensive Rookie of the Year was the Colts’ Darius Leonard in 2018.

Edge rusher Odafe Oweh, Baltimore Ravens (+1600): Oweh has the same odds as Ojulari, and will get the benefit of playing on a strong Baltimore defense. Opponents could be in pass mode in the second half of many games this year, which will give him a chance to get after the quarterback. However, because the Ravens are a Super Bowl contender, they won’t play him regularly if there are any issues, and the team recently added veteran Justin Houston on the edge to go with Pernell McPhee and Tyus Bowser.