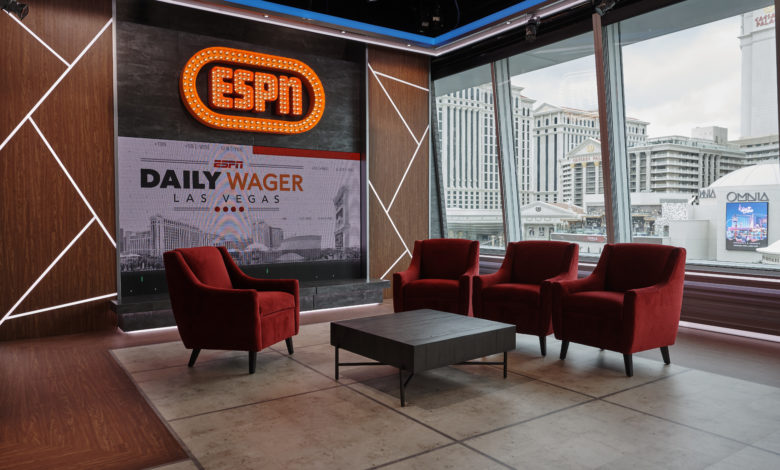 ESPN has opened a new studio at Caesars Entertainment’s The Linq Hotel + Experience in Las Vegas.

Building upon the deal with Caesars

The broadcaster said it will expand its content with Caesars to provide viewers with more Vegas-exclusive sports betting and entertainment news.

This will include moving ESPN’s Daily Wager show to the new Linq studio, which will begin from 8 September and launching a sports betting-themed digital show in the autumn.

The new ESPN studio is the product of a partnership between ESPN and Caesars that was inked in May last year. This agreement saw Caesars name ESPN as its exclusive odds data supplier across TV and digital channels.

Under the agreement, ESPN will have access to a 6,000 square foot facility and feature three studios, 12 cameras, and two exterior robotic cameras. The new venue will also serve as the home of ESPN’s sports betting-themed content for digital, linear and social shows.

The broadcaster said the studio will play a key role during major sporting events. September will also mark the inaugural NFL season for the Las Vegas Raiders.

Connor Schell, executive vice president of content at ESPN: “The appetite for sports betting content continues to grow among fans. Our new studio will not only operate as the headquarters for that content, but it will also anchor our year-round presence in Las Vegas – a city that has become a destination for the biggest events in sports.”

Schell also said that the new studio will allow it to broadcast coverage of Vegas-based sporting events such as UFC fights and games featuring the city’s new NHL franchise, the Vegas Golden Knights.

Chris Holdren, co-president of Caesars Sports said: “The debut of the all-new ESPN studio at The Linq Hotel + Experience is a testament both to Las Vegas’ position as the sports betting capitol of the world and its transformation into a sports city.

“With the marquee location of the studio right at the heart of the Strip, we’re excited to see the unique programming that could only be produced here in Las Vegas.”

The opening of the new studio coincides with the return of ESPN’s Daily Wager program which debuted last year. The program will now permanently move to Las Vegas and be broadcast from the new studio.

The Daily Wager show is hosted by Doug Kezirianm who has covered sports betting for more than 15 years. The show also features sports betting experts and analysis from ESPN analysts and reporters.