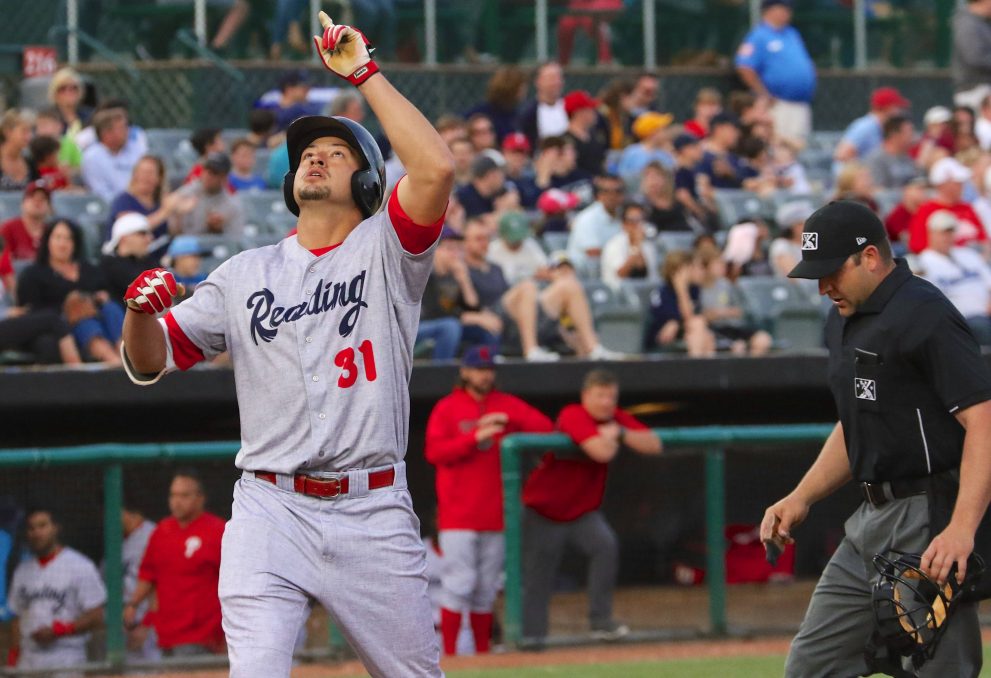 Once a baseball player gets a taste of the Major Leagues, he often has to get pulled away from the game kicking and screaming.

Dylan Cozens made the Big Show with the Phillies in 2018 and 2019, and at only 27 years old, the hulking outfielder could have spent several more years vying for another appearance.

Instead, the former second-round pick gave it all up in June of his own accord, ready to begin another professional pursuit that had always held intrigue: a shot at the NFL.

“When I realized what professional baseball was like, and what the minor leagues were like, I thought every single year that I was going to quit and go play football,” Cozens told Compare.bet. “I could just never really pull the trigger without giving the baseball thing a shot. I felt like I owed it to myself and to the organization to give it everything I had until it was truly making me unhappy, which is kind of what it got to at the end. It felt like I really didn’t enjoy the game any more. I wasn’t having fun. All I could think about was football.”

I’ve decided it’s time to chase my dream of playing in the @NFL. I want to thank the @phillies @RaysBaseball and @Brewers organizations for giving me the opportunity to play professional baseball but more importantly the people, experiences, and memories I’ll keep forever.

Cozens was a top MLB prospect for several years, rising up the ranks alongside fellow ‘Bash Brother’ Rhys Hoskins in the Phillies’ system. Cozens hit 40 home runs at age-22 in Double A in 2016, and made the majors for 26 games in 2018 and one more in 2019.

His career, though, eventually stalled, and the endless minor league bus rides gave him plenty of time to think.

“I feel like I had all the ability in the world to be one of the best players on the field,” Cozens said. “I was just lacking that passion. I took the time to sit back and look at why that was: It’s because my passion was in football. I finally got the courage to say, ‘Alright, it’s time to make the switch.’”

Cozens left the Milwaukee Brewers’ organization six months ago, and now, six days a week, he does a mixture of weight training, cardio and football drills.

Cozens only played one year of football in high school and none in college, but has a dream of playing professionally. The interesting part? It may not be entirely unrealistic.

“Playing NFL football is extremely difficult, even when you’re talented, but this dude was a difference-maker,” Ragle, who is now the head coach at Idaho State, told Compare.bet. “When I watched (former Chaparral star and current Titans left tackle) Taylor Lewan, that was the only dude that I said, ‘Man, that guy is playing on Sundays if he stays healthy.’ Dylan Cozens was pretty darn close to that.”

There is proof that Cozens has a legitimate NFL shot. The New England Patriots had him in for a tryout in August, though they didn’t sign him.

“I was super grateful to have that opportunity, and it was a good learning experience to know what I need to be prepared for moving forward with other teams and other workouts,” Cozens said. “It’s definitely going to help a lot with the next workouts, knowing areas that I wasn’t necessarily training for and drills that I hadn’t done.”

Feel extremely honored and lucky to have been invited to workout for the @Patriots. With only having one month of football training I really feel like I’m only scratching the surface of where I can be physically and technique wise. I will continue to get better every day.

Cozens is 6-foot-6 and 250 pounds, making him an intriguing prospect at defensive end or tight end. But finding a spot in the NFL certainly won’t be easy. He hasn’t played in an organized football game in a decade.

“He’s behind the 8-ball,” Ragle said. “He’s competing against guys that have been playing football while he’s been playing baseball. That’s night and day, and you’re talking about the highest level in the world. But the athleticism gives him a chance. If he’s in the physical shape that it requires to play at that level, his athletic talents give him that opportunity.

“In my opinion, he’s going to have to catch the eye of a GM that says, ‘Hey, man, this guy’s got enough athleticism for us to keep him, and we can coach him up, and he’ll have a shot in a year.’ But he’s got a lot of things working against him, like his age. Can they take someone that’s similar in athleticism and raw but is 23? You work with them for two years, he’s 25. You work with (Cozens), he’s 29. The guys that have been in the league for eight or nine years, they’re closing out their career. So he’s definitely got his work cut out for him, but if there’s a guy who has a chance, it’s him.”

Despite no college experience, the extended time off and the lack of game tape, Cozens believes it can be done because of his rare skillset.

“I don’t think that there are many 6-foot-6 guys that weigh 250, 260 that can move as quickly and run as fast as I can,” Cozens said. “And then you compound that with the work ethic, that dog mentality. I’m not going to shy away from contact. I’m there to play physical, and I think teams love that. Like a George Kittle-type player, Ndamukong Suh. Guys that kind of have that crazy factor to them. The sad thing is you can’t really show that without film, but as long as I look the part in workouts — I’m big, moving well, looking athletic, running routes or looking good off the edge — I think they’re going to love what they see.”

Cozens knows how to make a quick impression. Back in high school, he was offered a college scholarship before ever playing in a game.

“We did this skills competition with all the high schools up at Northern Arizona,” Cozens said. “They ran you through a bunch of drills: One-on-ones, shuttle drills, the 40, bench press, all that stuff. They wanted to see what kind of athlete you were and I won MVP of the whole tournament. NAU offered me before I’d even played, so I was like, ‘Oh, sh–, I might be built for this.’”

Cozens had 8.5 sacks his senior year and committed to the University of Arizona to play football and baseball. He ultimately chose professional baseball when the Phillies gave him a $660,000 signing bonus.

Chaparral slugger Dylan Cozens taken No. 77 overall by #Phillies. Not a good sign for #UAfans, where he committed for football/baseball.

Ragle, who was hired by the Wildcats as an assistant before Cozens committed, initially thought there was a good chance they would pair up together again in Tucson.

“Going into his senior season, (baseball people) didn’t think he was going to be a high draft pick, so I thought it was very realistic he was coming to UA,” Ragle said. “And then he just absolutely exploded his senior year. Bam, he’s picked in the second round. He calls me and he’s like, ‘Coach.’ I was like, ‘Yeah, I get it, bro. There’s no arguing with that.’ He signs and gets the money, which is totally understandable. He goes down the baseball path, but man, I thought he had special things ahead of him on the football field.”

After the long baseball detour, Cozens’ focus is now back on the gridiron.

The Patriots gave him a look at tight end, and Cozens said anything from offense to defense to special teams would be welcomed, though there does seem to be a slight preference.

Seven players since 1970 have played in both Major League Baseball and the National Football League.

Two of them — Deion Sanders and Bo Jackson — will be forever immortalized for their excellence in both. Brian Jordan also had significant success in baseball and football, while Drew Henson, Chad Hutchinson, D.J. Dozier and Matt Kinzer are the others to reach the highest level of both professional sports.

What do Bo Jackson, Brian Jordan & Deion Sanders have in common?

If Sanders had hit for @Braves in Oct 1992, he'd have been the first to play in the NFL & MLB on the same day.
It wasn't to be but Sanders got mighty close 🙏#MLBAtHome pic.twitter.com/xHOiuXSxdf

Cozens will never find the fame of Sanders and Jackson, but could add himself to the exclusive list of those two-sport standouts if he makes enough progress over the next few months.

NFL rosters balloon to 90 in the offseason, and that’s when teams will bring in high-upside players in hopes of finding a diamond in the rough. Due to his age, it could be Cozens’ best, and only, chance at fulfilling his dream.

“This is kind of the do-or-die offseason,” Ragle said.

Cozens led Arizona in home runs as a senior, mashing 19 taters in 33 games. That was second in the nation to a prodigious slugger named Joey Gallo, who is now a star with the Yankees.

While Cozens was on a similar trajectory at one point, the baseball greatness never materialized. But unlike others who have seen their professional athlete aspirations fall short, Cozens has a second dream lined up.

“I’m very thankful and happy that I ended up making it to the big leagues,” Cozens said. “Would I have wished to play for longer and become an All-Star and won a World Series? Yeah, absolutely. I think everyone that plays wishes they played more, longer and better. But I’m really not focused on anything that happened in my baseball career. If I play a game in the NFL, I think it would be more important to me than anything I did in baseball.”