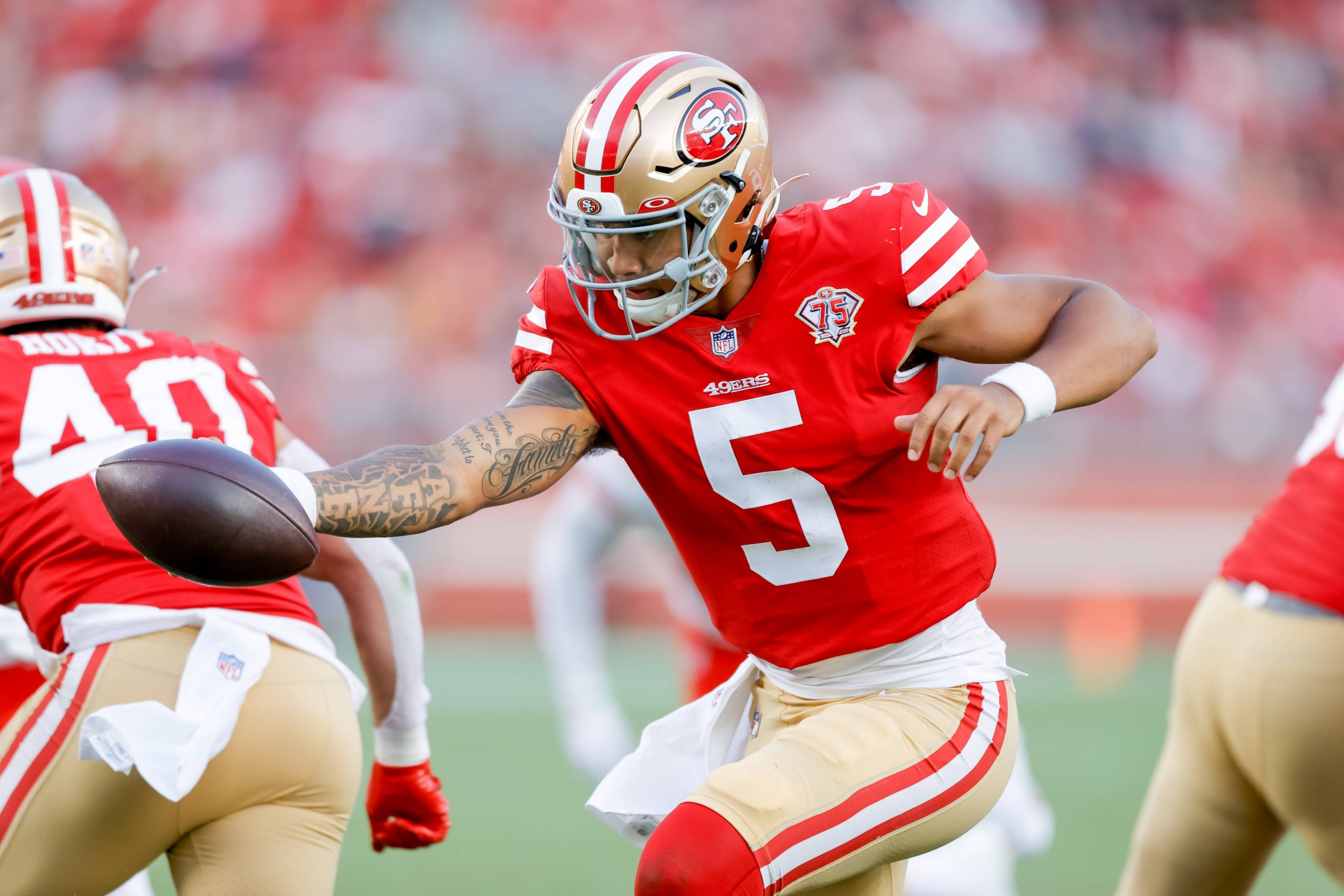 The Trey Lance hype train continues to gain steam, and deservedly so.

After encouraging reports throughout training camp, the San Francisco 49ers’ rookie quarterback played in his first preseason game on Saturday and did not disappoint.

While a completion percentage of 35.7 was suboptimal, Lance flashed his considerable talent against the Chiefs, never moreso than on an 80-yard touchdown bomb to Trent Sherfield in the first quarter.

Lance faked a handoff and bootlegged left before settling into a completely clean pocket. The movement gave Sherfield time to zip past double coverage, and Lance hit him in stride for the score.

Lance finished the game 5-of-14 passing for 128 yards and the touchdown. It comes on the heels of regular practice praise, which has led to speculation about his ability to usurp Jimmy Garoppolo as San Francisco’s starting signal-caller.

Lance’s odds to win NFL Offensive Rookie of the Year have improved to +700 based on his preseason progress, but he is still behind the Jaguars’ Trevor Lawrence (+300) and the Bears’ Justin Fields (+650) in the pecking order, via DraftKings on Aug. 17.

Lawrence went No. 1 overall and is virtually guaranteed to be the starter for the Jaguars, so his status as the favorite is logical. However, Fields is also behind a veteran in Chicago and was drafted lower than Lance. The oddsmakers clearly feel it won’t be long before he overtakes Andy Dalton, but it’s a mild surprise to see Fields with better odds than Lance.

There is a chance that Garoppolo holds onto the starting job throughout the preseason and staves off Lance for some or all of the regular season, which would kill the No. 3 overall pick’s Rookie of the Year hopes.

But San Francisco gave up a small ransom to move up in the draft, and based on the early reports, it seems only a matter of time before Lance takes over as the starter. If the Rookie of the Year race is viewed through that prism, Lance seems like quite the value at 7/1.

His odds have already started to improve this preseason, and despite the 49ers’ public show of faith in Garoppolo, there is belief that Lance will be promoted sooner rather than later. If and when that happens, the value won’t be there, making this a good time to get in on the action.

The Case For Trey Lance

If Lance becomes the team’s starting quarterback, he’s going to have plenty of assistance.

The 49ers were ravaged by injuries a season ago and finished just 6-10, but they still boast many of the same players that made the Super Bowl after the 2019 season.

They have a regular season win total set at 10.5, and if Lance helps lead San Francisco to double-digit victories and a playoff berth, that’s going to resonate with the voters. Lawrence, Fields, Falcons tight end Kyle Pitts (+900) and Jets quarterback Zach Wilson (+1000) are all playing for significantly less-talented teams and could be out of the postseason hunt early on.

The 49ers have an impressive skill player trio of tight end George Kittle, wide receiver Deebo Samuel and wide receiver Brandon Aiyuk. Additionally, coach Kyle Shanahan is a master tactician who does a fantastic job of putting his players in position to succeed, which means easy passes could result in chunk gains.

Lance’s mobility is a major plus, and Shanahan will prove apt at gearing the offense toward that strength. In this weekend’s game, Lance also showed off impressive velocity and accuracy, making him a true dual threat.

Shanahan is similar to fellow NFC West coach Sean McVay in that he has an uncanny knack to make life easy on his quarterback. It has not always resulted in huge offensive production in San Francisco, as a combination of Garoppolo, C.J. Beathard and Nick Mullens has been a less-than-ideal scenario from a talent standpoint.

Lance is more gifted than that trio, and the last time Shanahan had a supremely talented quarterback at his disposal, the Falcons made the Super Bowl and Matt Ryan won MVP. Garoppolo helped get the 49ers to the Super Bowl in 2019, but between injuries and inconsistency, he is no longer seen as a viable long-term option.

The question is: who will be the guy in the short-term? It’s a slight gamble to take Lance for NFL Offensive Rookie of the Year because Garoppolo is still the starter. But if Lance can get on the field early, the +700 odds for NFL Rookie of the Year won’t last long. Jump on them while you can.

Here is a look at the other top NFL Offensive Rookie of the Year candidates:

Quarterback Trevor Lawrence, Jacksonville Jaguars (+300):  Even though coach Urban Meyer has yet to name him the starter, no one is expecting Gardner Minshew to beat out Lawrence for the gig. Lawrence got his first taste of NFL game action against the Browns, finishing 6-of-9 for 71 yards while taking two sacks and fumbling. He has talent and opportunity, but the Jaguars do not have a very good team around him.

Quarterback Justin Fields, Chicago Bears (+650): There is no denying Fields had an encouraging preseason debut, as he finished 14-of-20 passing for 142 yards and a touchdown while adding a rushing score against the Dolphins. He was the fourth quarterback taken in the draft and seems on a path to early playing time. The Bears’ offense isn’t as talented as San Francisco’s, but the defense is good, so if Fields plays well the wins could stack up.

Which of these QB’s is going to have the most successful career? pic.twitter.com/dlT9ID4n1A

Running back Najee Harris, Steelers (+800): The Steelers figure to lean on Harris heavily as a rookie, so his numbers should look stellar by the end of the year. Even though Kyler Murray and Justin Herbert have won the past two NFL Offensive Rookie of the Year awards, quarterbacks do not have a monopoly on this hardware like they do MVP. Harris is a decent value here, though it’s notable that he may have to beat out five first-round quarterbacks to win the award, which won’t be easy.

Tight end Kyle Pitts, Atlanta Falcons (+900): The Falcons figure to throw a lot in 2021, and if Pitts proves to be a quick study, he could put up some head-turning numbers as a rookie. Calvin Ridley is the No. 1 option now that Julio Jones has been traded to the Titans, but there will be plenty of targets to go around. Atlanta bypassed a couple intriguing quarterback options when choosing Pitts in the draft, so the decision-makers are clearly excited about his potential.

Quarterback Zach Wilson, New York Jets (+1000): The No. 2 overall pick has a clear path to playing time in 2021, though his odds of winning Rookie of the Year aren’t great. The Jets were the worst team in the NFL last season, and while the wide receiver trio of Corey Davis, Jamison Crowder and Elijah Moore is decent, Wilson would have to quickly assimilate to the NFL game to be in the mix.