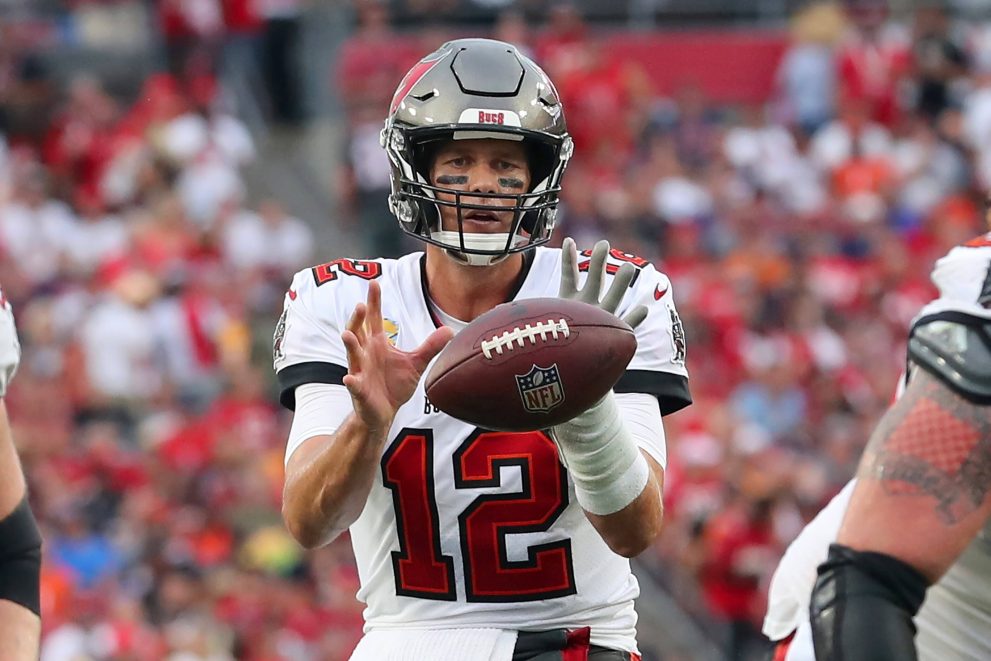 Tom Brady? The counting stats look nice, but it’s taken him a league-high 457 passing attempts to accumulate 3,403 yards and 30 touchdowns. Brady’s yards per attempt figure of 7.4 is a pedestrian 13th in the NFL, and he has a Total QBR of 63.6 this year, which is on pace for his fourth-worst mark since 2006.

Kyler Murray? The numbers are definitely impressive. League leader in yards per attempt, passer rating and completion percentage above expectation, and his rushing ability continually puts defenses in a bind. But he’s already missed three contests, and in a 17-game season, it’s hard to ignore so much time on the sidelines.

The QBs are trying to convince us this week to give MVP to another position this year. Generous of them, really.

Aaron Rodgers? There’s no question the Green Bay quarterback is coming on strong, and maybe he wins a second straight MVP. But the numbers are down across the board compared to a year ago, and his net yards per attempt of 6.9 is only eighth among quarterbacks. Like Brady, his 64.9 QBR is worse than the majority of his seasons since 2006.

Matthew Stafford? A defender would intercept the trophy at the awards ceremony and return it for a touchdown.

Patrick Mahomes? Name recognition and past performance are keeping him in the mix, but this is easily the worst year of his career.

To make a long story short: The best NFL quarterbacks have been anything but elite this year, as each MVP resume has more holes than Swiss cheese.

Even though there are still six weeks left in the season, it’s a strong bet that 2021’s top quarterback will pale in comparison to the crème de la crème of years past.

So it begs the question: Is there an avenue for a non-quarterback to win MVP for the first time since running back Adrian Peterson in 2012?

While it’s maddeningly repetitive to have the best quarterback in the NFL win Most Valuable Player every season, there is just no other option. If the honor was given to the best player regardless of positional value, then yes, this would be a completely different conversation.

Colts running back Jonathan Taylor has been absolutely phenomenal this season, carrying the ball 209 times for 1,205 yards and 14 touchdowns. He leads the NFL in rushing yards, rushing touchdowns, rush yards over expectation and is second in Pro Football Focus’ rushing grades behind Cordarrelle Patterson.

On defense, Browns edge rusher Myles Garrett has 14 sacks in 12 games this season, which gives him an outside shot at Michael Strahan’s record of 22.5. Garrett’s Pro Football Focus grade of 91.8 is third among all defensive players.

For those that want to go way outside the box, 49ers left tackle Trent Williams has been insanely efficient at a cornerstone position. He has a Pro Football Focus grade of 98.2 this season, protecting quarterback Jimmy Garoppolo impressively while bulldozing defenders in the run game.

But Taylor’s MVP odds sit at a longshot +1800 mark on DraftKings, while Garrett and Williams can’t even be wagered on.

Human error is common in awards voting, as a quick scan through history will show some egregious choices for MVP and other honors. However, the voters have gotten it correct for the past decade, because there is no other option than doling out this hardware to the best quarterback.

Pro Football Focus did a study in 2019 which still holds true today. It created a methodology to impart ‘Wins Above Replacement’ to each player in the NFL, similar to the standard in which Major League Baseball players are judged.

It found that, even in truly dominant seasons by running backs, the added value was almost non-existent because of the abundant supply at the position.

When LaDainian Tomlinson won the MVP award in 2006, the Chargers superstar was worth 0.34 more wins than a replacement-level running back. Peterson was worth only 0.30 WAR in 2012.

Now compare it to the quarterbacks: Tom Brady was worth 5.38 more wins than a replacement-level signal-caller in his 2017 MVP season, and Patrick Mahomes was worth 4.39 WAR in 2018.

It can be argued that a running back’s worth cannot be completely measured by statistics. For instance, Titans running back Derrick Henry forced defenses to load the box, which made life easier for quarterback Ryan Tannehill.

Derrick Henry has been robbed of NFL MVP awards. Titans are nothing without him.

But the same is true in reverse, as teams with great quarterbacks will always find it easier to run the ball because there will be more looks with two deep safeties.

For those who prefer fewer algorithms and a more common sense view, just take a look at Green Bay this season as a good example.

The Packers didn’t have Aaron Rodgers against the Chiefs due to COVID and scored only seven points with Jordan Love under center. Green Bay was without superstar wideout Davante Adams in a game against Arizona the week prior and was still able to knock off the previously-undefeated Cardinals with Rodgers at the helm.

Like it or not, a quarterback has an outsized impact on the game, which is the textbook definition of value.

Salaries are another great reminder. Murray could threaten to approach $50 million per year when he signs a contract extension with the Cardinals. Arizona running back James Conner is currently tied for the fifth-best odds in Offensive Player of the Year voting, but his actual value is dwarfed by Murray: Conner is making $1.75 million this season.

This won’t be much of a debate if a quarterback excels down the stretch to run away with the MVP. But if the top candidates remain inconsistent and Taylor continues to shine, or if Garrett breaks the sack record, there will be murmurs about their candidacy.

There’s no doubt that non-quarterbacks in the NFL are valuable to their teams. Taylor, Garrett, Rams defensive tackle Aaron Donald, Cowboys cornerback Trevon Diggs and others have helped swing games by themselves.

However, no one does it as consistently and as often as quarterbacks.

If the award gets re-named, the candidate pool can widen, but other positions simply do not  bring as much value as the signal-callers.

Thus, this year’s MVP has to be the best quarterback, underwhelming choice or not.