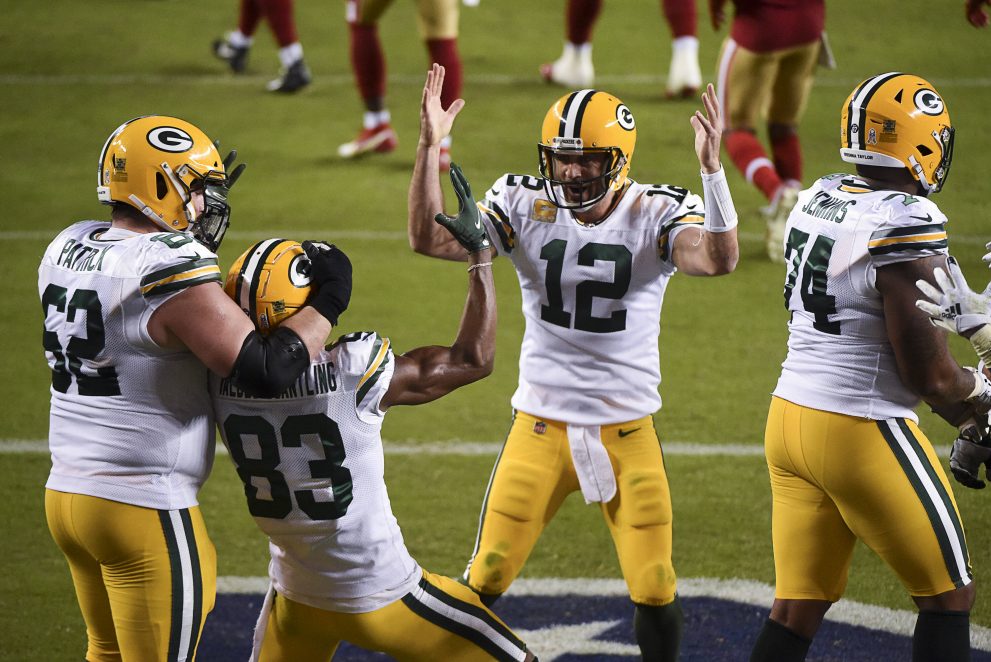 The last time the Arizona Cardinals were a juggernaut, Rashad Johnson was smack in the middle of the fun.

The ex-safety spent all but one of his eight professional seasons with the team, including the memorable run to the NFC Championship game in 2015.

Arizona’s last victory that year came in the NFC Divisional Round against an undermanned Packers team — but it took overtime because Aaron Rodgers nearly willed his team to victory despite the absence of his star receivers.

As the teams meet at State Farm Stadium for “Thursday Night Football” six years later, the circumstance feels similar, and Johnson says the favored Cardinals have to watch out for more magic.

“He will turn into Discount Double Check, for real,” Johnson told Compare.bet with a chuckle. “I’ve seen the commercial a lot but in person it is something different. He is special, man, a first ballot Hall of Famer. When he’s on the field, they are always capable of winning a game. I know we want to go into this game and say Arizona has it wrapped up with Davante Adams and those guys out, but he’s always a factor.”

What up #BirdGang?! The @AZCardinals are on fire to start the season!

It's still early, but are they Super Bowl contenders? #NFL pic.twitter.com/s7jTBL1cKk

Johnson, who is now a commentator for the Crimson Tide Sports Network, speaks cautiously because of Rodgers’ greatness, but is also quick to compliment what the Cardinals have accomplished this season.

They are undefeated seven games into the season and have a good shot at their first 8-0 start in franchise history. Johnson believes star quarterback Kyler Murray is neck-and-neck with Tom Brady and Dak Prescott for MVP, and sees an extremely bright future for Arizona because of Murray’s presence.

“Honestly, there is no ceiling for a kid this young, this talented,” Johnson said. “That extra juice he has with his feet — he’s fast, he’s quick and he’s elusive all at once. It’s special to watch. The Cardinals have something special brewing right now that can become an ongoing dynasty if these guys stay healthy and continue to push forward. Ultimately the wins will determine that, but with him at the helm they have a chance.”

The Cardinals don’t have nearly the same rich franchise history as a perennial contender like the Packers, but Johnson doesn’t believe past success — even as recently as a season ago — transfers over.

“I don’t think you can say a team is not a Super Bowl contender just because they haven’t had a previous track record of going to a Super Bowl,” Johnson said. “Each year in the NFL is a new year to me, and this year this team is arguably the best team in the NFL. They’re doing it offensively, defensively and even on special teams.”

Johnson said it’s no coincidence that the Cardinals’ 2015 run and the current group both hit a peak three years into a coaching staff’s tenure. That amount of time gives players and coaches time to jell.

“It’s a good mark — end of the second year, the third year,” Johnson said. “It becomes a deeper bond than just football. Patrick (Peterson) was at my wedding. Tyrann (Mathieu) was at my wedding. Jerraud (Powers) was in my wedding. Things like that don’t come about by just playing football games. It comes about by spending time with each other, getting to know each other, and it takes the game to a whole new level.”

As a former safety, Johnson has enjoyed watching the Cardinals’ star duo of Budda Baker and Jalen Thompson. He says they have done a terrific job patrolling the back end and limiting explosive plays for opposing offenses.

“When you’ve got guys like Budda and Jalen tackling well in the open field — which is the hardest thing to do as a safety — it allows you to be much more aggressive up front,” Johnson said. “You don’t have to sit back in zones. You can bring pressure.”

Johnson is a bright football mind and was asked if there is anything beyond injuries that gives him pause about this group.

“Man, nothing really,” Johnson said. “ They’ve been consistently getting better. Early on it was like, ‘Well the Cardinals beat the Titans pretty bad on the road, but maybe the Titans aren’t a good football team this year.’ But you look and they’re a really good football team.

“As these weeks go on, you look and it’s like, ‘Man, there isn’t really much you can poke holes in.’ Kyler is great. The receivers are really good. They’ve got a nice running game. As long as they continue to not give up the big plays and not turn the ball over, it’s going to be up to them to write their own destiny this year. It’s going to be very interesting, because you usually you have your favorites, but this year it’s a shake-em-up, and it’s going be fun to watch.”