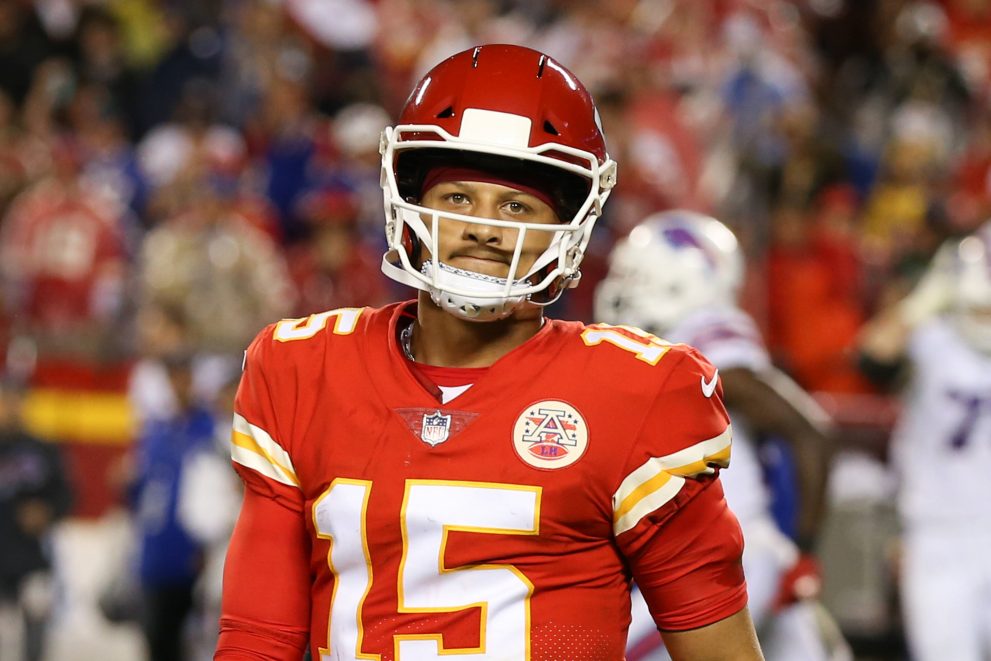 There are two things that stand out about Patrick Mahomes’ contract.

One, the 10-year, $503 million extension he signed in July of 2020 made Mahomes the highest-paid NFL player of all-time.

Which is to say, the Chiefs are blowing it.

Kansas City is paying the best quarterback in the NFL the equivalent of high-end backup wages this season — Mahomes’ cap number of $7.4 million is $100,000 more than Case Keenum — which has given GM Brett Veach ample money to trick out the roster with talented players.

The Bills and Cardinals have followed that playbook perfectly and are among the top Super Bowl contenders as the season reaches its midway point, but the Chiefs have not allocated their resources as wisely. The roster has major issues, and their title odds have begun to drop precipitously as the losses pile up.

The 3-4 Chiefs reached a new low on Sunday as the Tennessee Titans dominated from start to finish in a 27-3 rout. Kansas City’s defense is a special kind of awful, as the run-stoppers couldn’t prevent a caterpillar from converting a fourth-and-1 and the back seven gives more cushion than a couch.

If Kansas City was simply below average at defense, it would be plenty good enough. Instead, it looks like Mahomes is trying to score 10 points on every drive to make up for the complete inadequacy. The supremely talented quarterback is having the worst year of his career, averaging a career-low 7.6 yards per pass attempt with 18 touchdowns and nine interceptions.

The #Titans blitzed Patrick Mahomes on just 1 of his 39 dropbacks (2.6%) in their decisive 27-3 victory over the #Chiefs.

Mahomes has faced a blitz rate of 10% or less in each of his last four games.#KCvsTEN | #ChiefsKingdom pic.twitter.com/3zqhiCg920

Mahomes was the preseason favorite for MVP and now has just a 2.2% chance of winning it. The Chiefs were widely expected to claim the AFC crown and are now behind the Bills and Ravens in the latest odds.

Kansas City still has Mahomes, tight end Travis Kelce and wide receiver Tyreek Hill, so the season is certainly not lost. Even though the schedule is tough, there is such high-end talent — and such a track record — that the Chiefs cannot be counted out yet.

The wait for a turnaround has now extended through October, and the disastrous defense gives serious pause to the Chiefs’ Super Bowl chances.

And if they don’t win it this year, the path just gets tougher in ensuing seasons. Mahomes’ cap hit will be $35.8 million in 2022 and $46.8 million in 2023. The Chiefs are going to start shedding key players because it will be impossible to keep everything intact.

On defense, maybe that’s not the worst thing, as high-paid stars like Tyrann Mathieu, Frank Clark and Chris Jones have not lifted up the group.

But it’s hard not to think of the Seahawks when looking at this Chiefs team. Seattle won a Super Bowl and went to another when Russell Wilson was on his rookie contract.

Once he got expensive, the Legion of Boom broke up and the Seahawks lost the depth and high-end talent that made them so effective. Seattle has still been a perennial playoff team, but continues to fall short of making the Super Bowl.

Mahomes is so talented that maybe he can get Kansas City there when the defense finds some semblance of effectiveness. But from a team-building aspect, the journey is only going to get harder.

The Chiefs were all-in this season, keeping Mahomes’ cap hit low to flank him with talent. But it seems like Veach may have missed the mark, and it may cost Kansas City a golden chance at another championship.

The Fine Five In The NFC

While the AFC is a muddled mess, the NFC seems to have a clear delineation between the haves and the have-nots.

The Cardinals, Buccaneers, Rams, Cowboys and Packers are a combined 30-4 on the season, while the Saints are the only other team in the conference above .500, pending their Monday Night Football matchup in Seattle.

There is only one first-round bye because of the recent playoff expansion, and that race will be critical. The Cardinals currently hold the edge via their undefeated record, but Tampa Bay is still listed as the favorite to ultimately win the conference.

The Cardinals and the Packers face off on Thursday Night Football, and its outcome could help determine if Green Bay deserves to be in this grouping. The Packers have only a plus-22 point-differential on the season and were ranked only No. 11 in team efficiency by Football Outsiders heading into Sunday.

The Cardinals are currently six-point favorites to take care of business at home, buoyed by the fact that Green Bay star receiver Davante Adams was recently placed on the COVID-19 list.

Tom Brady Making His Move In The MVP Race

Are we sure Father Time is still undefeated? Tom Brady continues to make a mockery of the aging curve, as he threw for 211 yards and four first-half touchdowns in Sunday’s rout of the Bears.

Yesterday was Tom Brady's 37th game with 4+ passing TDs, tying Drew Brees for the most in NFL history pic.twitter.com/MliMrPjUAW

Brady leads the NFL in passing yards (2,275) and touchdowns (21), statistics MVP voters gravitate toward when filling out their ballot. He is up to No. 2 in ESPN’s Total QBR metric after earning a 93.1 Total QBR against Chicago, which was the best in the NFL on Sunday.

When Brady left the Patriots, it sure felt like his career was finally winding down. Now it’s hard to know if his play will ever drop off before he ultimately decides to retire.