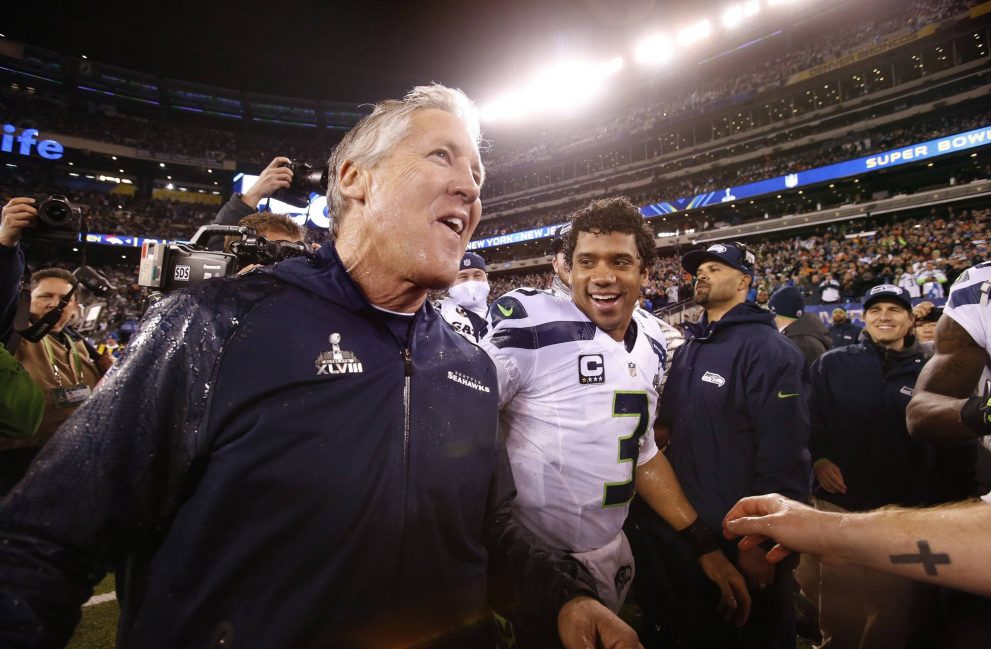 Backup quarterback Geno Smith laid face down on the grass Sunday night, distraught over a late-game fumble that led to the Seahawks’ overtime loss in Pittsburgh.

So many times prior, Seattle had Superman to save the day in these situations, but his mortal replacement had no such luck.

The Seahawks are at the tail end of one of the more dominant decade-long reigns the NFL has seen. Since 2012, the team has gone 100-49-1 with a Super Bowl title, another appearance and eight playoff berths.

Quarterback Russell Wilson — the aforementioned superhero — coach Pete Carroll and general manager John Schneider have been together the whole way, but it’s fair to wonder if a breakup is on the horizon.

The Seahawks are 2-4 this season after the loss to Pittsburgh, which puts them last in the NFC West. If they can tread water until Wilson returns, there is still the chance of claiming a wild card berth. But it is a significant ask, as the defense is subpar and Wilson is not available to cover up the team’s myriad shortcomings with his breathless display of natural talent.

The Seahawks did a tremendous job of re-tooling after the vaunted Legion of Boom broke up following the 2017 season, but this time it feels different.

Wilson was open to a trade last offseason before eventually finding common ground with the Seahawks. While the relationship seems OK for now, frayed edges have a tendency to rip, and Seattle’s new ownership may have to decide between coach and quarterback this offseason.

Carroll had a dominant run of success at USC and has captained a similarly-impressive stint with the Seahawks.

It would not be easy to move on from such an illustrious figure, especially considering Carroll has a contract that runs through the 2025 season.

Carroll, though, is 70 years old and intent on living by an old-school NFL philosophy: run the ball, play solid defense, and ignore the analytical revolution that has taken the NFL by storm the past few years.

Despite the presence of Wilson, Carroll has failed to adopt an offensive philosophy that highlights his best player’s strengths. In his four full games this season, Wilson attempted an average of 27.3 passes per contest. In contrast, Patrick Mahomes is averaging 40.3 pass attempts per game this year.

Pete on second half O: "That's how we've played when we're at our best for years. There's a lot of people who want to gripe and complain about running the football but you saw, we scored 20 points in the 2nd half…and did it by controlling the football game."
Full intvw at 9:30

The Seahawks appeared to ‘Let Russ Cook’ at the beginning of the 2020 season, before Carroll pulled back the reins at the first sign of adversity.

On Sunday, Seattle had some success running the ball in the second half, so despite scoring only 20 points on 13 drives in the game, Carroll chose to look at it positively in an interview on Monday morning with 710 ESPN in Seattle.

“That’s how we’ve played when we’re at our best for years,” Carroll told the radio station. “There’s a lot of people who want to gripe and complain about running the football but you saw, we scored 20 points in the 2nd half…and did it by controlling the football game.”

Carroll has dug his heels in the ground. He believes in a certain way to win football games, even if it’s antithetical to his quarterback’s wishes.

If Carroll and his conservative nature stays, Wilson may want out. He will be 34 next season and despite a career full of accolades, only has a single Super Bowl title (and one that was more dependent on the Seattle defense than his arm.)

Wilson has two star receivers in Tyler Lockett and DK Metcalf, but may be wondering what he could do with a coach more inclined to build an offense around him.

He doesn’t have to look far for examples, as fellow NFC West teams the Arizona Cardinals and Los Angeles Rams have gone all-in with quarterbacks Kyler Murray and Matthew Stafford, and are reaping the rewards of those choices.

Wilson would be extremely attractive on the trade market. His base salary and roster bonus would cost a team $24 million in 2022 and $27 million in 2023, which is way below market value for the type of impact he would make.

Therefore, the Seahawks would get an absolute bounty in a trade, which would be critical because of Carroll’s aforementioned age.

In a pure football sense, Seattle has no reason to trade Wilson, because he is one of the most valuable commodities in the NFL and still in the prime of his career. However, as the league drifts to more of a player empowerment state, its hand could be forced, depending on Wilson’s feelings when the season concludes.

How Will It End?

If Wilson was upset last season after a 12-4 campaign, it seems natural that the same feelings will bubble up if he has to watch the playoffs from his couch this year.

There could be an ultimatum made, and if it comes to that, the Seahawks would be smart to choose their quarterback over their coach.

Carroll is quite clearly one of the NFL’s better coaches and always manages to field a competitive product. But Schneider and the ownership group must realize that a massive hole at quarterback would derail the Seahawks for multiple seasons.

Aaron Rodgers and the Green Bay Packers seem headed toward imminent divorce this offseason, but Seattle does not yet seem to be at the point of irreparable harm with its superstar quarterback.

Even if it costs Carroll, the relationship with Wilson is one the Seahawks must salvage to avoid the depths of the NFL rebuilding process.