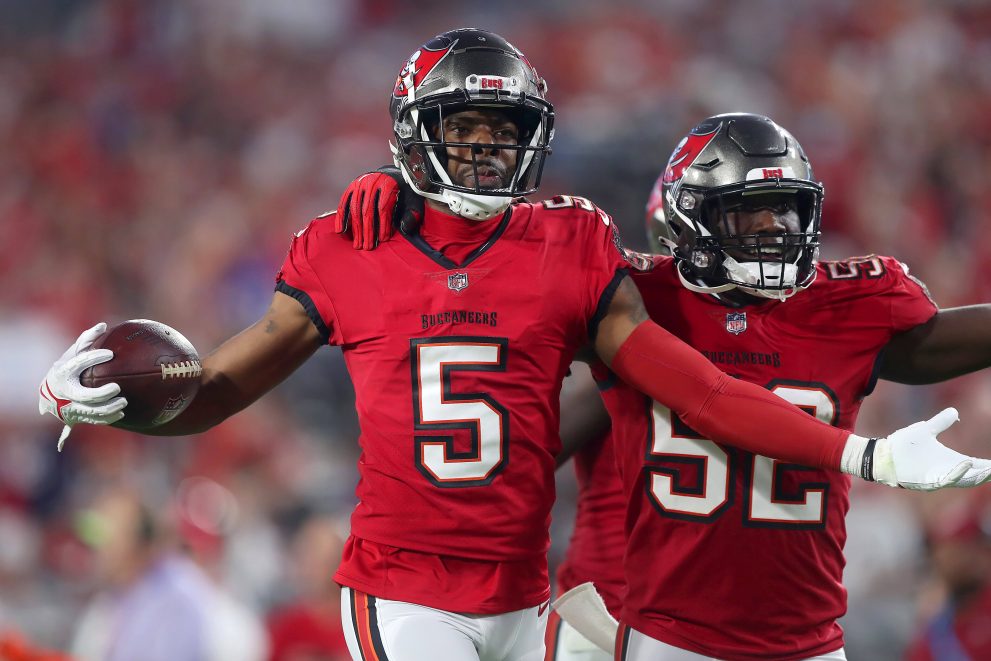 The Arizona Cardinals lost on Monday night to the Los Angeles Rams, leaving a void at the top of the power rankings. The team stepping in has the MVP favorite in Tom Brady and the most lethal passing attack in the NFL. Tampa Bay is the defending Super Bowl champion and looks well-equipped to make another run.

Here are my power rankings heading into Week 15. Odds courtesy of DraftKings on Dec. 14.

The Bucs blew a big lead and almost lost to the Bills, but were able to secure the win in overtime on a long touchdown pass from Tom Brady to Breshad Perriman. Tampa Bay has a great shot at the No. 1 seed in the NFC as it plays the Saints, Jets and the Panthers twice to end the year.

The Bucs and Chiefs were the preseason favorites, and after some early-season turbulence, they are back atop the power rankings. Kansas City blitzed the Raiders on Sunday, and the defensive improvement certainly seems sustainable at this point.

The Patriots are currently atop the AFC standings, but have a tough road game against Indy this week. New England is slightly below Kansas City in my mind, but the Patriots certainly look like viable Super Bowl contenders.

The Cardinals lost their grip on the top seed in the NFC with the Monday night loss to Los Angeles. Arizona decidedly lost the battle in the trenches, and has to get that remedied in order to have a chance at winning the Super Bowl.

Aaron Rodgers was dominant as the Packers avoided an upset loss to the Bears with a strong offensive performance. Green Bay is now atop the NFC standings following the Cardinals’ loss, but will likely need to win out to stay there.

This is a year's worth of highlights for most players. It's one game of work for Aaron Donald — the league's best player.

The Rams still have just an outside shot at winning the NFC West, but they kept that hope alive by upsetting the Cardinals on the road. Even if they enter the playoffs as a wild card, this team can’t be counted out. The defense has three superstars, and when Matthew Stafford is dealing like he was on Monday, Los Angeles can beat anyone.

The Bills are only a game above .500 now, but they can still be a dangerous team come playoff time. That was on display in the second half against the Bucs, as Buffalo nearly rallied for the win.

The Cowboys jumped out to a big lead on Washington and then held on for the win, ending any NFC East drama before it began. Dallas isn’t generally spoken about with the Big Three in the conference but has the talent to compete.

The Chargers have been playing well lately and have a chance to leapfrog the Chiefs for the AFC West lead with a head-to-head win on Thursday. It won’t be easy, but they aren’t huge underdogs. Los Angeles is trending toward a playoff berth either way.

The 49ers picked up a nice road win last time out and have solidified themselves as a likely wild card entrant into the playoffs. Quarterback Jimmy Garoppolo is playing well, and when he does that, San Francisco is tough to beat.

Cincy missed out on a golden chance to catch Baltimore in the divisional race, but more opportunity could await. The Bengals have looked like a playoff team all season and now need to finish hot to guarantee a spot.

The Ravens are fading fast, and now superstar quarterback Lamar Jackson is dealing with an ankle injury that knocked him from the loss to Cleveland. Baltimore has another tough game on tap against the Packers and is in danger of falling outside of the playoff picture if the struggles continue.

The Colts are picking up steam and can really turn some heads with a win over New England. Somewhat surprisingly, Indy is a slight favorite.

The Titans have an easy schedule down the stretch and running back Derrick Henry is expected back before the playoffs. Tennessee isn’t the best team in the AFC but should have an optimal enough setup to be a tough out.

The Browns picked up a much-needed win over the Ravens on Sunday, but are now dealing with a COVID outbreak. Something to watch, for sure.

Denver has kept itself in the playoff picture and now has a humongous showdown with the Bengals this weekend. The Broncos are slight home favorites and need to win to gain ground for an AFC wild card.

The Vikings made things interesting at the end once again but picked up a much-needed win over the Steelers last week. Minnesota is among five 6-7 teams in contention for the last NFC playoff spot.

The Eagles can surpass Washington in the wild card standings with a head-to-head win this week. It’s a muddled mess in the NFC and Philly has to win these type of games to have a shot at the No. 7 seed.

Sean Payton on Alvin Kamara returning to the lineup….
"There is an element of confidence that he brings with him and that carries over to the offense." #Saints

The Saints kept pace last week with a win over New York but will be significant underdogs against Tampa Bay. New Orleans has easier games in its final three but a loss here would make it tough to fight back and claim a playoff berth.

The Raiders didn’t show up in their loss to Kansas City, and may have kissed their playoff hopes goodbye.

As expected, Washington did not fare very well against the Cowboys. WFT is still clinging to the final playoff spot in the NFC but look for the Eagles to knock them from that perch.

Miami’s string of easy games continues this week against the Jets. The Dolphins can remain on the periphery of the AFC wild card hunt with a win.

Seattle took care of business against Houston and has a slim chance of making the postseason, but needs to upset the Rams on the road this week to keep that dream alive.

The Steelers have been more lucky than good this season, and will need to find a way to knock off Tennessee in order to hang around in the AFC playoff chase for another week.

Somehow, some way, Atlanta is only a game below .500 on the season and still in the mix for the final NFC playoff spot. The Falcons will need to pull off a big upset this weekend to keep pace.

What a disastrous season in Charlotte. The Panthers made two ill-advised quarterback moves and have fired their offensive coordinator, taking the steam out of a once-promising rebuild.

Jakeem Grant is fun. That is all.

Detroit got its win over the Vikings. Now it’s back to misery.

The Texans were mildly competitive against the Seahawks. Good enough to move up a spot in the powerless portion of the power rankings.

Not much to be excited about in New York. It’s surprising that the Jets have managed to win three games this year.

Another week, another report of Urban Meyer being an awful fit as coach of the Jaguars. Only intrigue left in the season: Will he get fired?