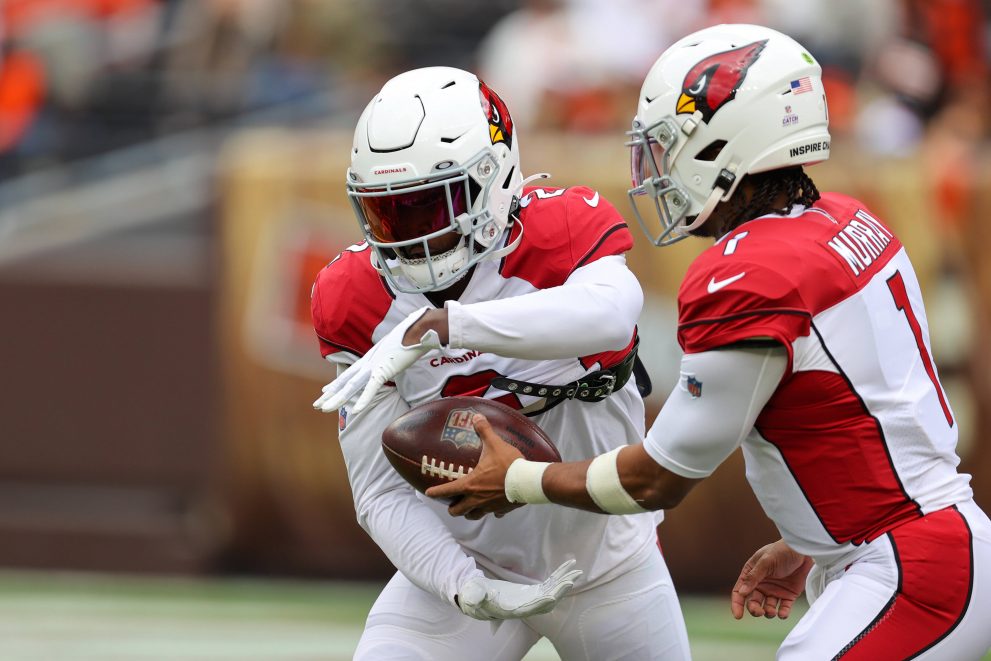 The Cardinals deserve their flowers. Not only is Arizona the only remaining undefeated team in the NFL, but it added another blowout road win to the resume on Sunday. Those things don’t happen often, and the Cardinals have now routed the Browns, Rams and Titans on their own turf. The Baltimore Ravens and Dallas Cowboys may be surging, but there is no debate at the top this week.

Here is a look at my power rankings heading into Week 7. Odds courtesy of DraftKings on Oct. 19.

The Cardinals didn’t have their head coach, All-Pro center or All-Pro edge rusher against the Browns and it hardly mattered. Half of Cleveland’s points came on an end-of-half Hail Mary. Arizona has an undefeated record and a plus-85 point-differential against a tough early-season slate, and seems to have no major holes as presently constructed.

The top two spots in the power rankings go to teams in the NFC West. Los Angeles blasted the Giants on Sunday, as Matthew Stafford continues to excel with his new team. The Rams’ lone blemish this season was a home loss to Arizona.

The Bills may have beaten the Titans if quarterback Josh Allen didn’t slip while trying a late-game sneak near the goal-line, but either way, the game was close throughout. Buffalo’s defense did not look dominant like it had previously, which drops the Bills a couple spots.

The Bucs staved off a late rally by the Eagles to pick up another win. Tampa Bay hasn’t been dominant this season, but is clearly one of the best teams in the NFL.

The Ravens have won five consecutive games, including a dominant display against the Chargers last time out. Despite a rash of injuries, Baltimore is proving it is a viable Super Bowl contender behind star quarterback Lamar Jackson and a strong defense.

It took an overtime session, but the Cowboys were able to knock off the Patriots on Sunday for their fifth consecutive victory. Dallas is already three games ahead of everyone else in the NFC East.

The Packers knocked off Chicago last week but it was another close contest. The overall record is impressive but Green Bay’s Super Bowl odds have slipped behind Arizona’s in the NFC.

Patrick Mahomes shook off some early-game struggles and Kansas City eventually pulled away from Washington. The Chiefs have a big matchup this week and clearly the oddsmakers still believe, as they are road favorites against Tennessee.

The Chargers do not match up well against Baltimore and that was obvious on Sunday as the Ravens rolled. Los Angeles still has a good team and will look to regroup during the bye week.

Running back Derrick Henry had another dynamic performance to help the Titans knock off the Bills on Monday night. Tennessee will jump into the Super Bowl conversation if it can upset the Chiefs this week.

Has there ever been an NFL running back who has been all of these things at the same time besides Derrick Henry?

The Browns were outmatched at home against the Cardinals, and even though they were missing several key pieces, so was Arizona. Quarterback Baker Mayfield is injured and playing poorly. This team is talented but needs to turn it around quickly.

It seems like Jimmy Garoppolo will be back under center this week. The 49ers’ chances of winning the NFC West are nearly gone but a wild card playoff berth is certainly possible. A victory over the Colts seems imperative.

The Saints catch a break this week as they face Seattle without quarterback Russell Wilson.

The Bengals continue to exceed expectations after throttling Detroit on Sunday. However, the oddsmakers still have them as longshots to win the Super Bowl.

The Vikings have clawed their way back to .500 on the season after beating Carolina. Minnesota did lose cornerback Patrick Peterson to a hamstring injury last time out.

Las Vegas has seemingly not been adversely affected by Jon Gruden’s sudden resignation, as it routed the Broncos last time out. The Raiders will be in the mix for a playoff berth if they keep this up.

The Broncos have lost three straight games after a good start and coach Vic Fangio’s seat seems to be getting hotter. Denver has an important Thursday Night Football contest against the Browns coming up this week.

Carolina has lost a pair of nail-biters in successive weeks. The Panthers traded for cornerback Stephon Gilmore thinking they were a playoff contender, and have to take care of business the next two weeks against the Giants and Falcons to stay in that hunt.

The Colts’ tough early-season schedule continues this week on the road against the 49ers. Indy is good enough to make a playoff push but has to win some of these toss-up games to have a shot.

The Philadelphia offense didn’t get going until too late against Tampa Bay. The Eagles traded Zach Ertz after the game, so Jalen Hurts will have one less key offensive weapon moving forward.

The Patriots were close to pulling off a solid upset of the Cowboys. Quarterback Mac Jones has shown promise this season, and New England has a winnable game next time out against the Jets that could help them pull back into the wild card race.

PFF grades for the rookie quarterbacks through six weeks:

The Steelers are back to .500, but it wasn’t the most encouraging display, as it took overtime to dispatch a Seahawks team without Russell Wilson. The defense continues to play well, but the offense remains an issue.

The overall record is fine, but the Super Bowl odds and this week’s spread show what the oddsmakers think of Chicago. This team is not very good.

The Seahawks were competitive against the Steelers, but will clearly need to grind their way to some victories in order to stay in the playoff hunt until star quarterback Russell Wilson returns.

Washington did a pretty good job early on against the Chiefs before eventually getting overpowered. The playoffs seem unlikely unless some semblance of improvement comes quickly.

The Dolphins have fallen apart in a hurry, and a loss to the lowly Jaguars might be the death knell for the season. It will be interesting to see how Tua Tagovailoa looks the rest of the way, and if Miami might be in the quarterback market again soon.

The Falcons are not a very good team, but can get to .500 on the season if they win as a road favorite against Miami next time out. This is a pretty surprising spread but Atlanta will aim to make it prove true.

The Giants look decent one week and then terrible the next. Either way, the losses have piled up quickly.

The Texans have lost five straight games and are humongous underdogs against the Cardinals. If quarterback Tyrod Taylor can return, they may at least hang around for a half.

The Jets didn’t lose last week. Oh, they had a bye.

The Jaguars grabbed their first win of the season in London. Now, about the games in the States…

The Lions are the only winless team remaining in the NFL, and coach Dan Campbell is calling out quarterback Jared Goff for his inconsistent play. Welcome to the bottom of the rankings, Detroit.