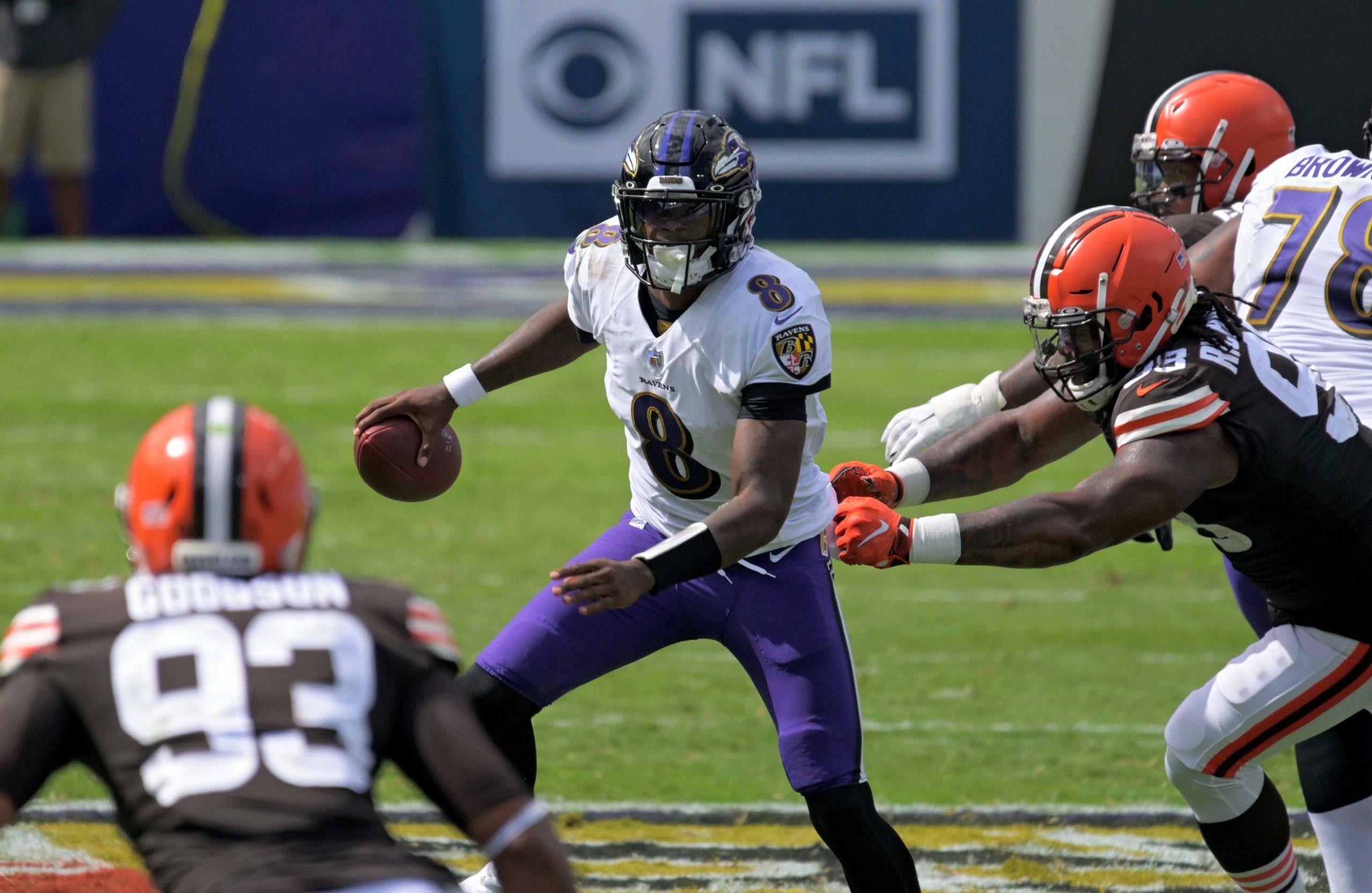 The Kansas City Chiefs may be the favorite to win the AFC, but there are three teams in the AFC North that fancy themselves contenders.

The Baltimore Ravens, Cleveland Browns and Pittsburgh Steelers are all talented enough to make a playoff push, and the fight for divisional supremacy in 2021 could be a heavyweight bout. The Cincinnati Bengals are the fourth team in the division and are not expected to be as competitive.

Here is a look at the AFC North with the regular season set to begin on Sept. 12:

Is this the year the Browns win the AFC North? 🏆 pic.twitter.com/yYIbJtw1Lp

Snapshot: The Ravens have been among the best teams in the NFL the past two seasons, as quarterback Lamar Jackson has led a well-balanced group to great heights. However, it has yet to result in a Super Bowl berth or even a spot in the AFC Championship game, which has some questioning the team’s ceiling with the dual-threat quarterback under center.

Jackson won the MVP in his second season but took a slight step back in 2020. He is expected to combine with running backs J.K. Dobbins and Gus Edwards for another lethal rushing attack, but the key will be efficient passing. The Ravens added Sammy Watkins in free agency and Rashod Bateman in the first round of the draft to pair with returning tight end Mark Andrews and wide receiver Marquise ‘Hollywood’ Brown.

The Baltimore defense is a perennial strength, and despite the loss of edge rushers Matt Judon and Yannick Ngakoue, it should remain that way. Marlon Humphrey and Marcus Peters make up one of the best cornerback duos in the league, while Calais Campbell, Brandon Williams, Pernell McPhee and Justin Houston are established veterans up front.

The Ravens have a momentous showdown with the Kansas City Chiefs in Week 2, so this futures bet could be blown up early. However, the game is at home, and Baltimore may even be a slight favorite. If the Ravens pull it out, check out the rest of the early-season schedule: The opener is in Vegas against the Raiders, with Week 3 on the road against the Lions and Week 4 on the road against the Broncos. If the Ravens get through that stretch of inferior opponents unscathed, they could be in the driver’s seat, with three consecutive home games against the Colts, Chargers and Bengals and then a bye in Week 8.

Brown had 584 receiving yards as a rookie and 769 a season ago, so the yardage trend is encouraging, and now he gets an extra regular season game. However, there is reason for concern. Brown had 29 more targets in 2020 but only averaged 6.4 more receiving yards per game. Andrews will remain a big part of the passing game, while Watkins and Bateman — who could miss the start of the season after undergoing groin surgery — are likely to cut into the target share. Baltimore will never be a prolific passing team with Jackson at the helm, and Brown has plenty of competition for the ball this year. He’s a big-play threat but may lack the consistency to surpass 800 yards in 2021.

Snapshot: The Browns had a breakthrough season in 2020 and return plenty of talent. They are aiming for a return to the playoffs and have eyes on a division title. While the win-loss record was impressive last year, the team’s point-differential of negative-11 was a concern, so there are doubters.

Quarterback Baker Mayfield is heading into his fourth season after an up-and-down start to his career. If the former No. 1 overall pick can reach stardom, the Browns will be in great shape, as they have a talented offensive line and skill players around him.

“If you were just choosing amongst the three QBs, you might take Baker Mayfield last, but I would take his team first. … The Browns might be the most talented team in the entire AFC.”@Espngreeny on who’s more likely to win SB LVI: Josh Allen, Lamar Jackson or Baker Mayfield. pic.twitter.com/L44mlNlGaX

The bigger concern is on defense. Myles Garrett is a star at edge rusher, but the group was revamped this offseason after subpar play in 2020. If imports like safety John Johnson, cornerback Troy Hill and defensive lineman Jadeveon Clowney can make an early impact, the Browns will have the balance needed to be a true AFC contender.

Even though two of his three NFL seasons have been solid, Mayfield has yet to surpass 3,827 passing yards in a campaign. However, the addition of a 17th game, his track record of durability and a good supporting cast should set him up well to reach 4,000 yards in 2021. Mayfield had five games last season in which he threw for 165 yards or fewer, all within the first nine weeks of the year. He was better down the stretch and should build on that in 2021. Additionally, if the Browns are a little worse than projected, Mayfield will need to throw more often than thought, which will help his yardage total.

Snapshot: The Steelers began last season 11-0 before limping to the finish line, losing four of their final five and then bowing out in the AFC wild card round to the Browns. They lost several key players this offseason, including center Maurkice Pouncey to retirement and tackle Alejandro Villanueva in free agency.

Pittsburgh has a brutal schedule this season, which includes two games apiece against the Ravens and Browns, as well as matchups with the Green Bay Packers, Buffalo Bills and Kansas City Chiefs. The Steelers added running back Najee Harris in the first round of the draft, but the team’s fortunes will likely come down to the passing game.

Ben Roethlisberger has been an above average quarterback for practically his entire career, but is nearing the end of the road and showed significant decline a season ago. If he can rebound, Pittsburgh can still challenge for AFC North supremacy. If not, the Steelers could be in trouble. The Steelers do have a talented wide receiver corps, led by JuJu Smith-Schuster, Chase Claypool and Diontae Johnson.

.@Steelers @ChaseClaypool looks like he understands the #Steelers mantra where “the standard is the standard” Never count the Steelers out. This is the effort and style of play I expect to see in 2021 #BaldysBreakdowns pic.twitter.com/bR2xUW2EiH

The defense will do all it can to lend a helping hand. T.J. Watt and Cameron Heyward lead a talented group up-front, while cornerback Joe Haden and safety Minkah Fitzpatrick highlight a secondary which has plenty of playmaking ability. Pittsburgh is likely to be competitive in the vast majority of games this season because the roster is well-balanced.

The ‘under’ is getting hammered at this win total. It is fair to be concerned about several aspects of this team, from Roethlisberger’s age, to the level of competition and the offseason departures. However, Pittsburgh still has plenty of talent and the value is here to grab the ‘over,’ as a 9-8 season would hit.

Harris may be a rookie, but he is expected to be used often in 2021. Not only will he enter the season as the primary ballcarrier, but Harris has the size to get the goal-line rushing opportunities. The 6-foot-1, 232-pound back had 26 rushing touchdowns for the University of Alabama in 2020. It’s a big jump to the NFL, but Harris is expected to produce immediately, and should have ample chance to find paydirt, as the Pittsburgh backups are not much of a threat to poach major carries.

Snapshot: The Bengals remain in the midst of a rebuild, and it would be an upset if they finished anywhere other than last place in the division. There is reason for optimism after a promising rookie season from No. 1 overall pick Joe Burrow in 2020, but the Bengals’ quarterback missed the final six games with a torn ACL. He is back practicing, and his ascension will be key to bringing the team back toward respectability.

Joe Burrow looks good today in one on one drills with receivers and corners.

-A 1st down pass to Chase, who had a great double move on an out route to get by Phillips.
-A perfectly placed deep ball up the middle to Trent Taylor.
-Another strike to Mike Thomas in the corner.

Cincinnati has a talented wide receiver group, which includes Tee Higgins, Tyler Boyd and rookie first-round pick Ja’Marr Chase. The problem is the offensive line, which put Burrow at risk last season and is not expected to be much better in 2021.

The Bengals’ defense has a star safety in Jessie Bates and an upper-tier pass-rusher in Trey Hendrickson, but there are a lot of holes elsewhere. William Jackson, the best cornerback last year, left in free agency. Cincinnati is going to struggle to keep above-average offenses at bay, and another losing season looks on the horizon.

The Bengals are a heavy favorite to finish last in the division, and for good reason. The Ravens, Browns and Steelers all have high floors because their rosters are strong and balanced. Sure, a major quarterback injury could hinder one of them, but each should be able to weather the storm of any short-term issues. The Bengals could be good down the road, but it’s hard to see a realistic path above fourth place in 2021.

The early reviews out of the Bengals’ training camp are not favorable, as Burrow and the passing game has not clicked. It is still early, however, and in-game struggles aren’t necessarily the worst thing in the world when it comes to this prop bet. Burrow is likely to throw a ton of passes in 2021 because the Bengals will trail in the majority of their contests. The yards should get racked up regardless of how efficient the passing game becomes. Burrow averaged 268.8 passing yards per game last year. If he matches that and plays all 17 games, the total would be easily surpassed.

All odds sourced from DraftKings and up to date as of Aug. 13.