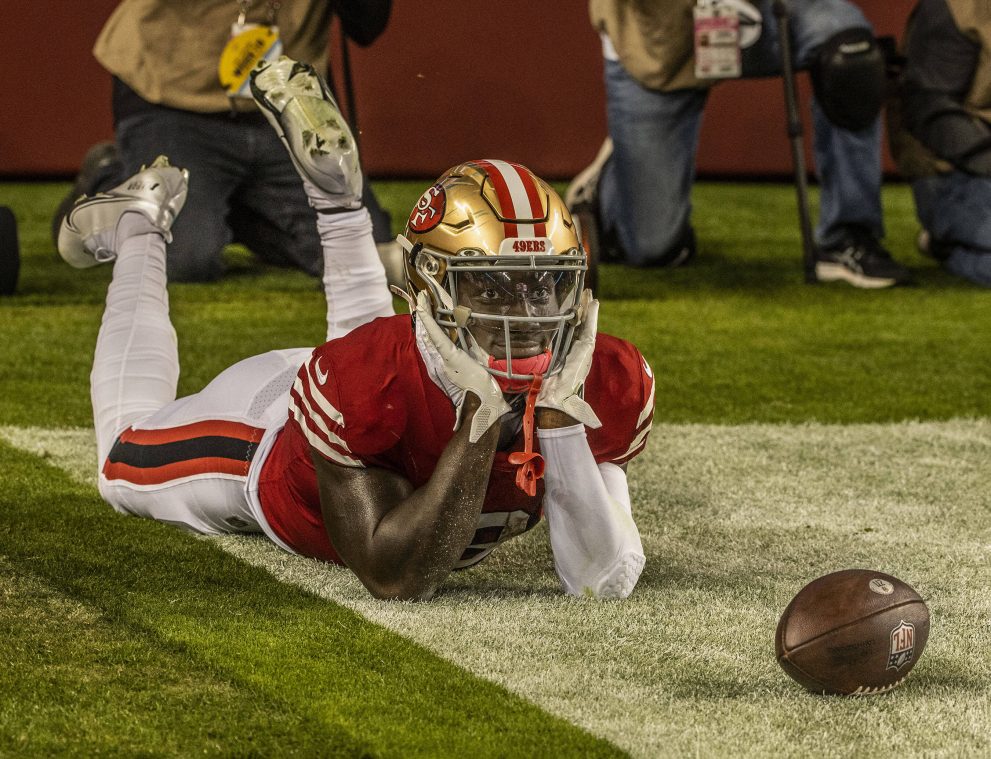 Spreads, totals and moneylines are the standard ways to wager on games, but player props are too fun to ignore. There are some interesting ones this week, including a Deebo Samuel rushing yardage prop that will hit easily if coach Kyle Shanahan follows last week’s offensive blueprint.

Here is my favorite bet for each game this week. Odds courtesy of DraftKings on Nov. 19.

The reason: The Packers have a shiny win-loss record but their point-differential and advanced analytical rankings give reason for pause. The Vikings are only 4-5 on the season but there is not much difference in talent level between these teams right now, especially considering Green Bay’s injury situation. Minnesota is the pick to secure a home win.

The reason: The Tennessee defense has been a revelation this season after it was projected to be poor. Houston does not have enough firepower to score consistently in this game. The Titans are missing star running back Derrick Henry and star receiver Julio Jones, which will force quarterback Ryan Tannehill to be more conservative, making the under the play.

The reason: The Bills are stuck in a jumbled group of five- and six-win teams in the AFC, but make no mistake, they are the best of the bunch. Buffalo is going to start flexing its muscle down the stretch, beginning with an impressive win in this game against a decent Colts team. Look for the Buffalo defense to make life tough on Colts quarterback Carson Wentz.

The reason: The 49ers lined up Samuel in the backfield several times last week against the Rams, and to great success. The star wide receiver had five rushing attempts for 36 yards and a touchdown. It was the fifth time he’s gotten at least one carry in a game this season, and coach Kyle Shanahan must have been impressed. Samuel is capable of surpassing this total with one carry, and two would make it a near shoo-in.

Deebo has lined up in the backfield four times tonight (tying a career-high), and has been the ball-carrier on a designed run on all four plays (32 yards & TD).

The reason: The first-round pick has made a great impression since taking the field in Week 6. He is averaging 4.5 catches and 60.3 receiving yards per game in the first four games of his career and has been targeted at least six times in each one. Quarterback Lamar Jackson already seems to trust Bateman, who should be able to surpass this total against Chicago.

The reason: This is the type of game where it feels like the spread can’t be high enough. The Lions are one of the worst teams in the NFL already and seem likely to start backup quarterback Tim Boyle instead of the injured Jared Goff. Cleveland struggled last week but is the vastly superior team and should win this game easily.

The reason: The Panthers are going to start Cam Newton at quarterback, but his knowledge of the playbook is still cursory at this point. Carolina always relies on McCaffrey, but will likely do so even more in this one. The game is likely to be close, which will be the right type of game script for McCaffrey to rack up the carries and the yards.

Cam Newton will start on Sunday for the Panthers vs the Washington Football Team and his old coach, Ron Rivera.

The reason: Sometimes veteran backup quarterbacks can be better short-term options than higher-upside rookies, but that’s not the case here. Joe Flacco has been a subpar quarterback for years and his supporting cast leaves much to be desired. The Dolphins’ defense was dominant against the Ravens and should feast in this one.

The reason: The Eagles’ offense has really hit a nice groove of late and is up to No. 8 in Football Outsiders’ offensive efficiency rankings. However, the Saints have a stout defense and should be able to neutralize Philadelphia to an extent. Even though New Orleans is without quarterback Jameis Winston, the overall roster is talented, and a slight upset should be on tap.

The reason: Cincinnati has been efficient through the air this season and the Raiders are pass-heavy, which makes the over attractive. The Bengals’ defense been impressive but Las Vegas usually finds a way to score. This one should have enough big plays to reach 51 points.

The reason: The Chiefs have the more impressive long-term track record, but there is no question that Dallas has been the superior team this season. Even though Patrick Mahomes was dominant last time out against the Raiders, the Cowboys’ defense is a tougher challenge. The Cowboys’ offense should put up points in this one. An upset is possible, but the spread is the smarter play in case of a close loss.

The Cowboys will be without WR Amari Cooper on Sunday – placed on the Reserve/ Covid-19 list. Big hit to the offense. Stinks with this being huge matchup against the Chiefs.

The pick: Cardinals over 24.5 points

The reason: Star wideout DeAndre Hopkins has already been ruled out of this game, and quarterback Kyler Murray’s status is up in the air due to a sprained ankle. However, if Murray does get on the field, this total seems like it will be surpassed pretty easily. Seattle will be more aggressive offensively now that quarterback Russell Wilson is back in the lineup, and Arizona always pushes the envelope on offense.

The reason: These teams have similar win-loss records, but Los Angeles is the superior team and will be playing at home. It remains to be seen if Steelers quarterback Ben Roethlisberger plays due to COVID-19, but either way the Los Angeles defense should be well-suited to keep Pittsburgh at bay. The margin should be a touchdown or more.

The reason: New York’s defense has been decent enough this season, and while the offense has struggled, injuries have been a main culprit. Running back Saquon Barkley seems on track to play for the first time since Week 5 and the receiving corps is also getting much healthier. New York will score enough to cover.