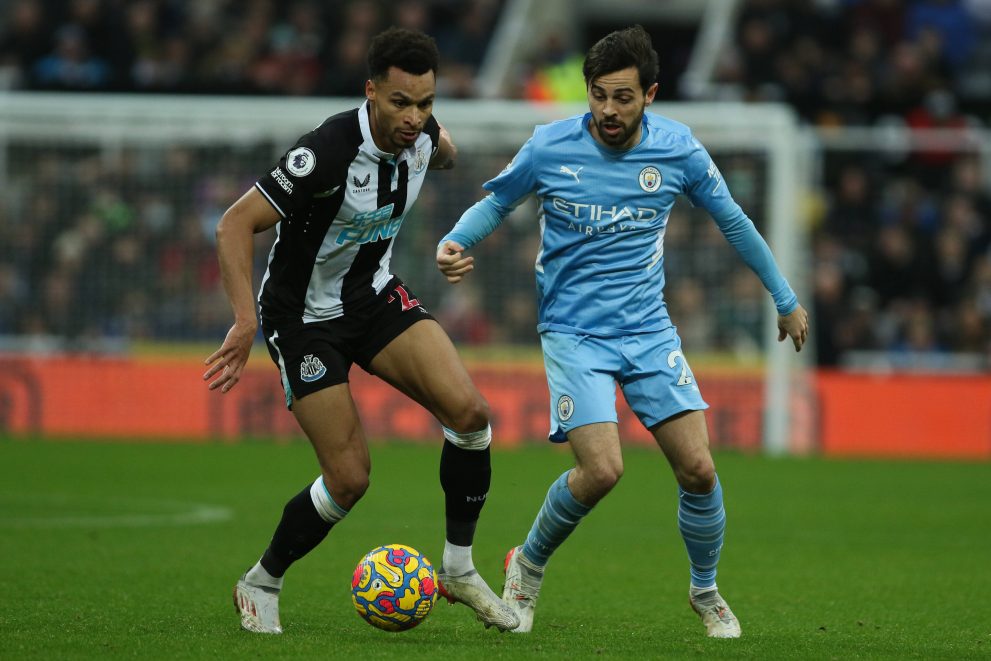 It would be entirely unreasonable and unrealistic to expect rival supporters to be overly enthused about Manchester City. That’s not how football fandom works.

Across the Seventies and Eighties, when Liverpool dominated the English landscape and conquered Europe as a rule, anyone not of a red persuasion griped that penalties were remarkably easy to come by at Anfield, with the broader insinuation being that decisions tended to go in their favour. The same was said too of Manchester United during their protracted prime and furthermore, their unerring habit of scoring late winners was typically put down to luck. All told, that’s forty years of utter brilliance largely attributed to ref bias and good fortune.

Manchester United are 3/1 to score from the spot this Monday at St James Park. Newcastle have conceded a league-high of six already this term.

Yet crucially the respect was always there from everyone; the admiration, even if it was unsaid. How could that not be the case for two clubs who continually set the standards for others to aspire to?

Do Manchester City receive the same level of respect and admiration, after winning the league five times in the last decade and in recent years under Pep Guardiola, reimaging domestic football for the better? Many City supporters think not and it’s a view also shared by former players of the club.

Gary Owen made over one hundred appearances for Manchester City in the mid to late Seventies, a period that saw the Blues miss out on a league title by a single point. He has been perplexed by the lack of recognition afforded the most successful English side of the modern era, particularly since their Catalan grandmaster has taken them to an unprecedented plateau.

“To say that City are under-appreciated is an understatement. Just look at the records they have broken in five years. They’ve won ten trophies, meaning that Pep Guardiola has won a trophy every 24 games. They’ve won three leagues, one FA Cup, four League Cups and reached a Champions League final. Under Pep they’ve scored 782 goals which averages well over two per game and they have just broken Liverpool’s record from 1982 for winning the most games in a calendar year — and that Liverpool side was the best I ever faced by the way.

They’ve also broken a record for most away wins that has been held by Tottenham for 61 years. There have been 144 clean sheets and Pep is the fastest Premier League manager to win 150 games, managing it in 204 games. It took Jose Mourinho 230 matches and Sir Alex Ferguson 247. I could go on and on. It is absolutely phenomenal.

But I thought @ManCity were boring?

City are unsurprisingly short-priced to beat Leicester on Boxing Day. Look past the result and head to the minutes market where the Blues are 4/1 to be ahead after 10. The league leaders have regularly scored early in 2021/22.

The predominant reason for this shortfall of due acknowledgement most likely derives from the substantial investment that has accompanied City’s rise. Owen points out that Manchester United also bought big and often during their heyday to sustain their success and highlights too that the Red Devils have hardly been shy in getting their chequebook out in a period that’s seen them fall behind their local rivals. Yet still, to this juncture the back-and-to that is heard so often in pubs and read on social media appears to hit an impasse. City fans believe their title-winning sides do not get anything like the credit they deserve on top of the undeniable truth that investment has played a role in it. Rival fans believe the titles have been won because of that investment.

It’s a difference in perception that has driven tribalized arguments for quite some time and frankly, it’s a difference of opinion that presumably won’t ever be resolved.

This season however, for reasons largely unknown, a fresh twist to the narrative has arisen, one that — it can reasonably be adjudged — is beyond the pale. At the very least, it is a development that can be construed as highly contestable. Because even across those four decades of dominance by red behemoths no-one surely could have questioned their excellence nor capacity to entertain, for all the cheap jibes made at supposed favouritism.

Owen, an avowed lifelong Blue, refers to the United of Scholes and Giggs as a ‘joy to watch’ while Anfield was illuminated prior by Dalglish and Keegan, their patented ‘pass and move’ exhilarating to behold.

The present-day United may not hold a candle to their iconic predecessors but they will almost certainly be too strong for a spiraling Newcastle on Monday. Back the visitors to win to nil at 13/8.

It is an admiration of the style and substance that wins football games that is now being denied Manchester City as first on Twitter, then on radio phone-ins, a debatable opinion is gaining traction that Pep Guardiola’s intricate creation is ‘boring’ to watch. Meanwhile, in a national newspaper last week a journalist went one step further, deeming them to be ‘soulless’.

Like many City supporters, who find themselves routinely mesmerized by the intricate passing patterns and treasuring of possession from their team, all enacted in an exemplary fashion never before witnessed on British soil, Owen is astounded by such belittlement.

“They’re boring. That’s what I heard from an Aston Villa fan on the radio. They say it’s boring because City are so good. They score the most goals and gain the most points and that just screams out to me that someone is either jealous or at a basic level does not understand football. What Pep has done in five years — coming into the hardest league to master — is unbelievable and what that team regularly produces is like a work of art.

Was it boring when Manchester United beat Ipswich 9-0 with Scholes and Beckham and the rest? They were a joy to watch. But City beat Leeds by seven and guess what, it’s ‘boring’. People are either jealous or have no idea about football.”

I saw all the bleaters bleating about possession football and how boring Manchester City are. Then Kevin de Bruyne played that pass. If you're bored of this City team, you're bored of sport.

It is certainly very possible that envy lies at the source of such claims, while the former City star’s assertion that it mainly originates from a disparity in quality is also an indisputable factor. So often do we see Guardiola’s men comprehensively dismantle opponents, thus depriving a neutral tuning in and hoping for an upset, of even a whiff of drama. Yet wasn’t the same true of United at their peak? And Liverpool in their indomitable pomp?

Regardless, this new stick to beat City with doesn’t appear to be going away anytime soon, with the subject explored on the BBC earlier this month and only loudening in volume as the Blues compete for a sixth Premier League title. All of which leaves Owen frustrated, not a little exasperated, and furthermore believing that those who seek to demean this extraordinary construction are missing out on an exceedingly rare phenomenon.

“It’s going to be a very sad day when in a few years Pep Guardiola decides that he needs a rest or moves on to manage a national team. Because these past few years I’ve been privileged to see the best football of my life. I thought the Barcelona team under him was special and I’d never see their like again. But now it’s every week.”

Leicester boast a decent record against Manchester City in recent seasons. Backing both teams to score on Boxing Day at 1/1 is a good shout as a Bet Builder.